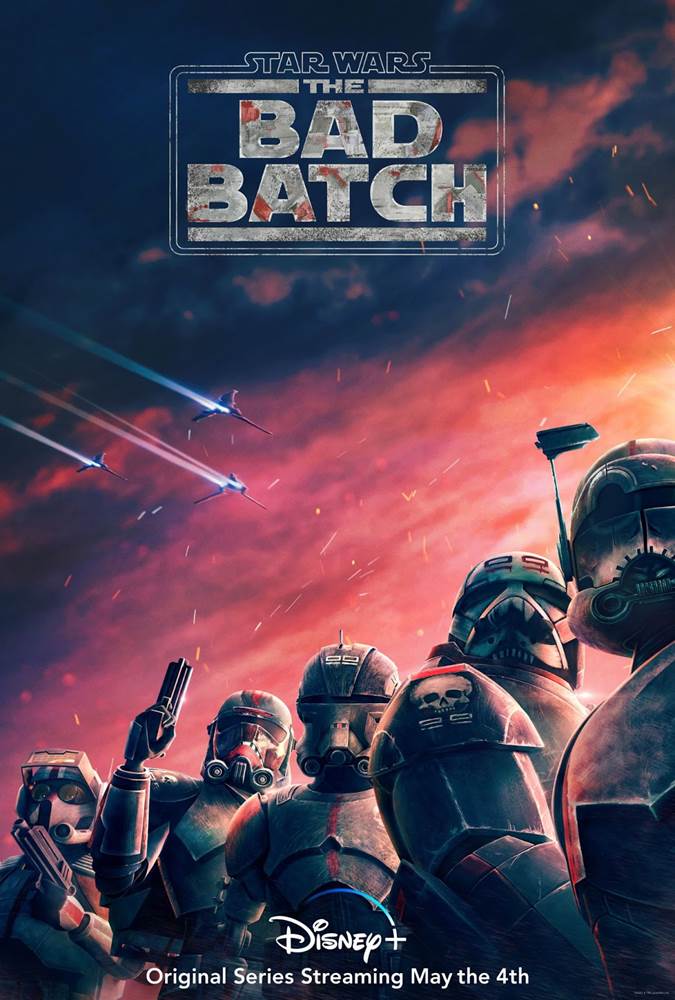 Star Wars: The Bad Batch definitely wants you to know it is a spinoff of the hit (and recently completed) animated series Star Wars: The Clone Wars from Lucasfilm Animation. This show starts with the familiar Clone Wars logo burning away to reveal the new Bad Batch logo and then launches right into the Tom Kane voiceover narration we saw at the top of every Clone Wars episode, this time introducing us to a particular Jedi Knight and her Padawan learner– who might be familiar to anyone paying close attention– and the Clone Troopers who fight alongside them.

The troopers and Jedi call in backup who turn out to be the titular Bad Batch AKA Clone Force 99, a group of Jango Fett clones with “advantageous mutations” that give each of them a particular set of skills– think The A-Team in A Galaxy Far, Far Away. There’s Hunter (basically Rambo), Crosshair (an expert marksman), Wrecker (the crew’s heavy), Tech (the smart one), Echo (a “reg” who joined the team after being experimented on by the Separatist army in The Clone Wars), and Ringo (the funny one). Just kidding about that last member, but you get the idea.

The Bad Batch (all voiced by Dee Bradley Baker with various unique inflections) are very good at what they do for the Republic, and have racked up dozens of wins on assigned missions, but that doesn’t necessarily translate to success under the newly formed Galactic Empire in the wake of Order 66, in which many Clone Troopers were forced to turn on their Jedi generals thanks to inhibitor chips embedded in their brains. I won’t spoil why the Bad Batch aren’t (or maybe are?) affected by these chips here, but they do deal with that issue pretty much right away, which is good because it was probably my biggest question heading into the series.

Returning to the planet Kamino after their final Republic mission, Clone Force 99 meets a mysterious young girl named Omega (Michelle Ang of Fear the Walking Dead)– again, I won’t spoil what her deal is in this review– and get tested in combat by Admiral Wilhuff Tarkin (Stephen Stanton, reprising the role from The Clone Wars), who is of the mind that the Empire should switch to conscripted recruits rather than continue with the Kaminoan clone program. There is dissension in their ranks, a daring escape, and I don’t think it’s surprising or unpredictable to say that the team winds up going off on their own adventures and meeting up with some other familiar faces along the way.

I’ll be recapping each episode of this series as they are released, so I won’t go into any more specific plot details here. Instead I’ll just say that fans of The Clone Wars will be happy to find that Star Wars: The Bad Batch retains that series’ style and quality of animation– essentially matching the upgraded look we saw in season seven, produced last year for Disney+ after a long gap between installments. Creator Dave Filoni and his talented staff have provided a sense of continuity with a smooth transition between Star Wars time periods, and it’s exciting to see these characters faced with an unfamiliar galaxy now that Emperor Palpatine (voiced by actor Ian McDiarmid of Return of the Jedi and the prequel trilogy, through what I believe to be recycled audio from Revenge of the Sith) has declared himself supreme ruler.

A good deal of The Bad Batch is likely to be about how life around the established Star Wars universe changes under Imperial rule, and we see that best through the eyes of the main characters, who served the Republic so faithfully and now find themselves questioning their superiors and setting off on their own path. We know these characters are good in a fight, but are they capable of doing the right thing? That’s a question that hangs over the first couple episodes and I’m sure it will prove to be the series’ thesis statement as this first season continues over the coming weeks. It’s an intriguing way to start a Star Wars animated series, and I’m excited to see these characters grow and develop as they face new challenges and head into unexplored territory. The show also shares some structural DNA with The Mandalorian as far as character arcs and relationships to authority go, which can’t hurt either. It’s a proven formula that will hopefully carry this franchise into its next memorable era.

Star Wars: The Bad Batch premieres Tuesday, May the 4th exclusively on Disney+.