Renting an ECV at the Reopening Disneyland Resort

I was lucky enough to go to the reopening of the Disneyland Resort this past weekend. Typically I bring my own scooter, a Pride GoGo I’ve had for nearly 20 years, but this trip I opted to rent locally for part of the trip and then I selected a Disneyland Resort scooter for the final day. I haven’t rented from within the resort in many, many years, having found off-site rentals more nimble to operate and with the added flexibility of use outside of turnstiles. 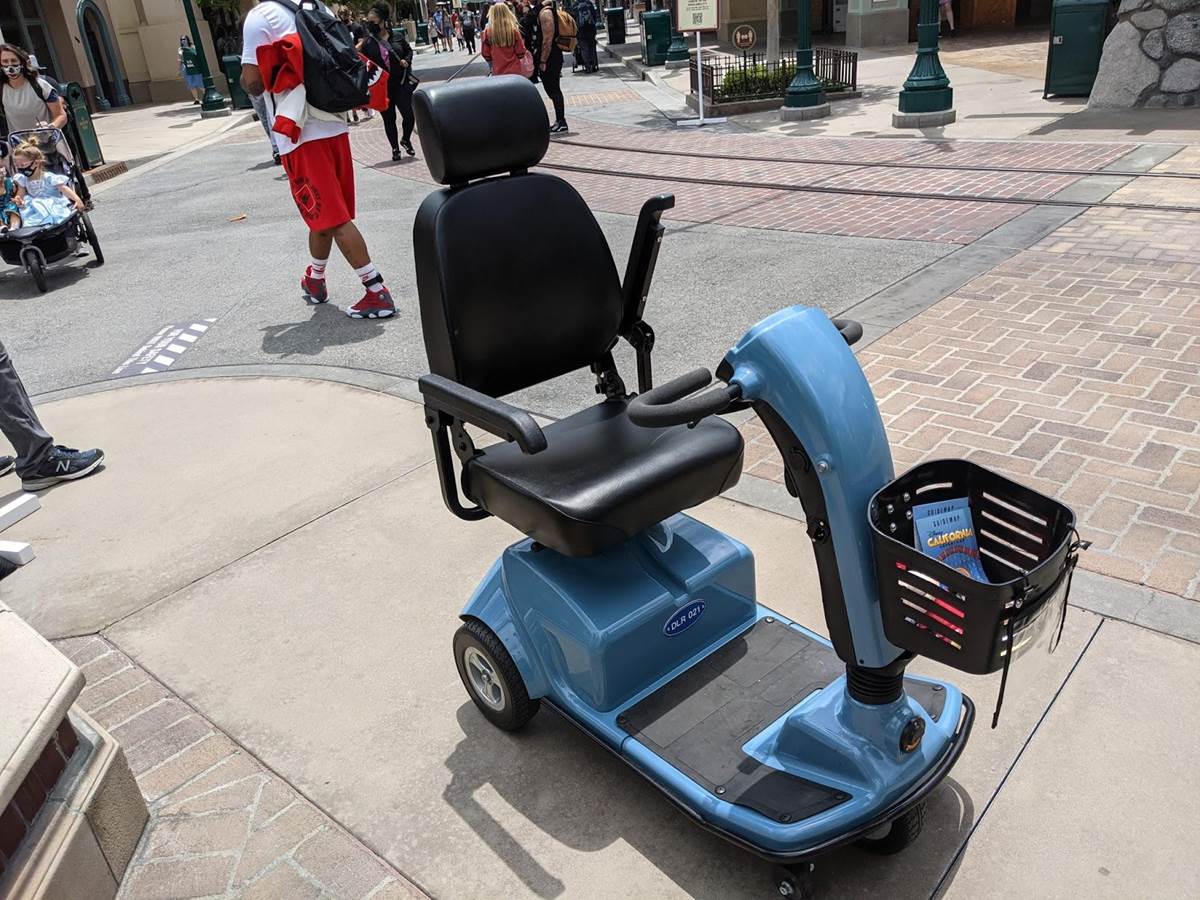 With the trams not operating, I was concerned about the trek from the parking structure, so it was a very pleasant surprise to find an Electric Convenience Vehicle (ECV) rental along with a stroller rental location at the parking structure. Not only did this allow for transport along that long corridor, but the freedom to use the scooter throughout Downtown Disney as well. 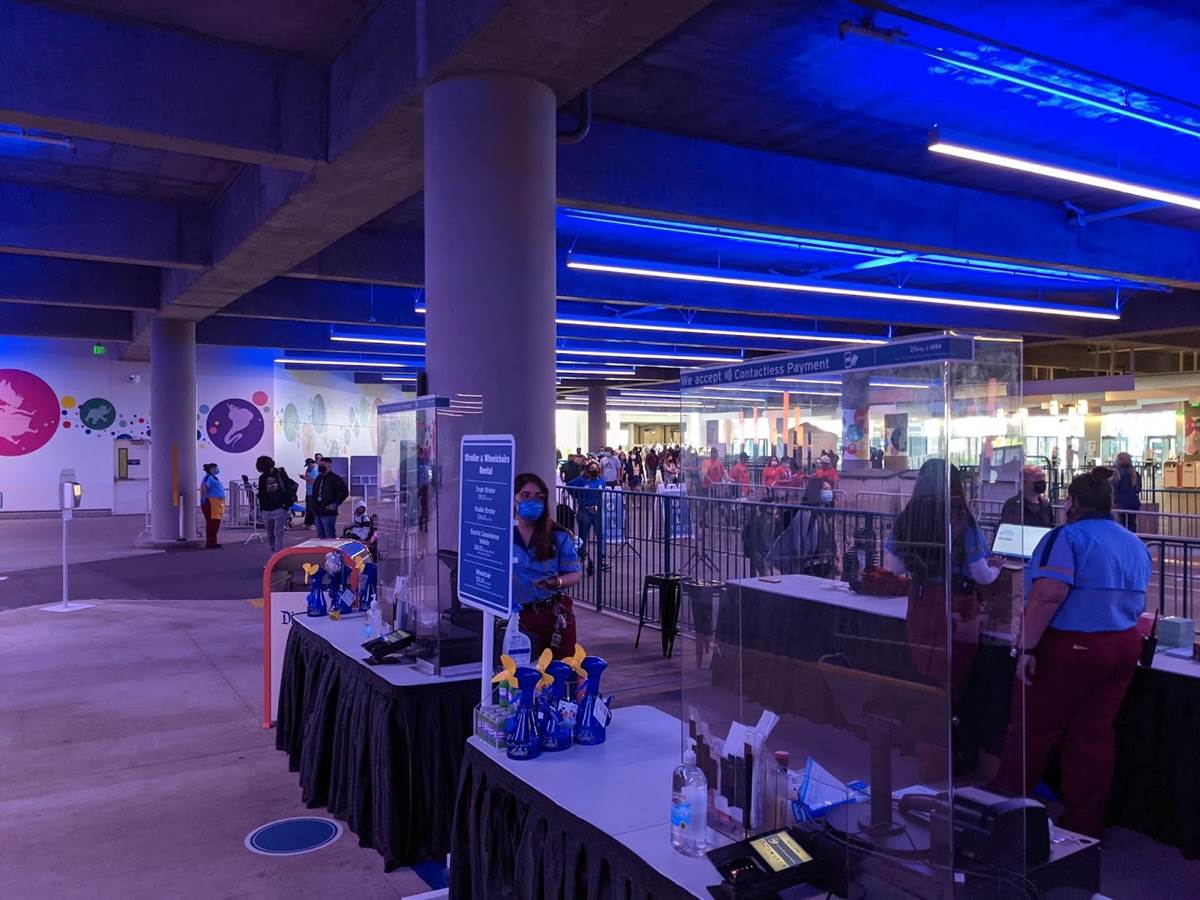 Also new to me were the delightfully blue ECVs available. I’ve taken to calling it Disneyland Blue. It was a nice change of pace from the drab gray models that dominated the scene for so long. And the ECV is a three wheel rather than four wheel design, allowing for a smaller turn radius. It does, however, have a much wider front end than my own three wheel so it took just a little bit of time to adapt. The seat arms rise allowing for easy exit and there’s a generous hard sided front basket. 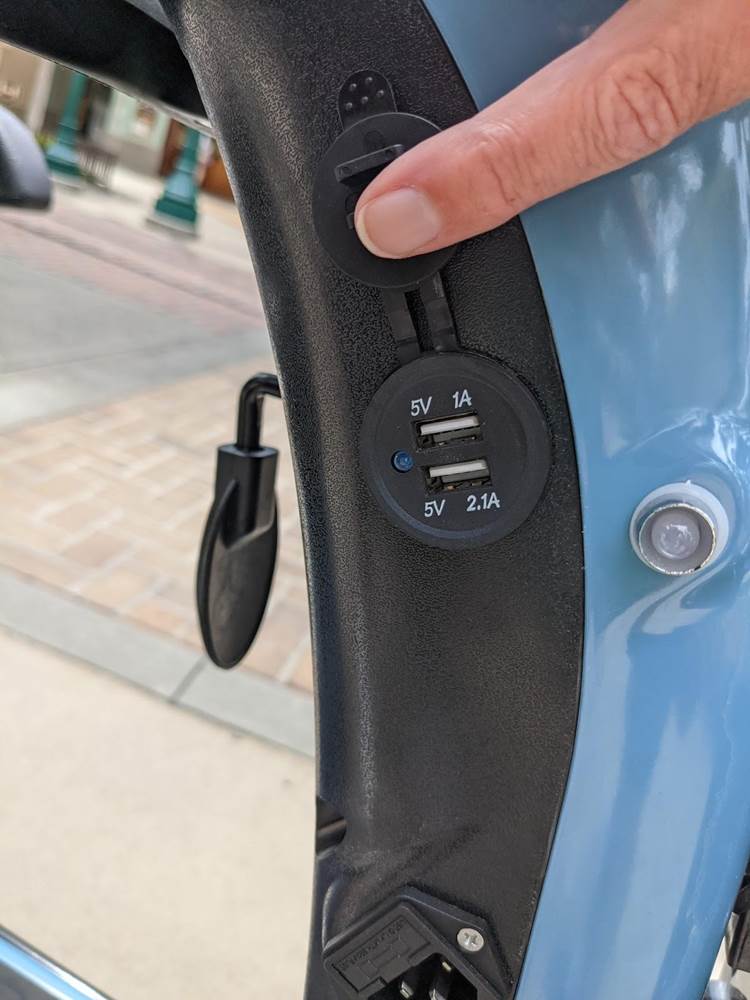 My initial experience with the ECV was rather poor. Its top speed could not keep up with my family’s not-even-brisk walking pace. However, I don’t believe that this is the intended speed of the ECV as I was passed by two other Disneyland Rentals ECV rentals on the path from the parking structure to the Esplanade. Once at the Esplanade, I explained my experience to the Cast Member at the rental location by Disneyland’s main entrance and while she appeared skeptical and informed me that she couldn’t guarantee the ECV I would receive in the trade would be any faster as they are speed regulated, I did ride away on a different scooter which was indeed faster and able to keep up with my family’s walking speed without being set at its top speed. I also saw another guest swap out their ECV claiming it was running a great deal slower than another park rental in their party. I’m unsure why there was a variance in speed among the rentals, perhaps the speed regulation is an inexact science and still being adjusted with use. Disneyland ECVs are definitely much slower than top speeds available on personal or off-site scooters —  which is not surprising given their heft — but I found the top speed could keep up with my family’s brisk walk which is all that’s necessary.

Cast Members were so helpful in guiding me through the processes of attraction access, which varied between locations. Some had fully accessible queues and some would offer return times similar to the wait time posted on the non-accessible queue. I’m not sure if it's truly new or just new to me, but I didn’t find travelling on an ECV as challenging as I have in the past. Main Street had many large areas of curb cutaways to allow easy access from the street area to the sidewalks. Personal tip – beware if you travel close to the Rivers of America as it is a really bumpy journey due to the cobblestone. Instead take the high road for a smoother ride.

The cost for the daily use of the ECV is $60 plus a $20 refundable deposit. Sales tax does not apply to the ECV deposit. For more information, you can visit Disneyland’s official page