Sydney learns that hard way that she doesn’t have to be great at everything in “Man! I Feel Like a Genius,” the newest episode of Sydney to the Max. Meanwhile, her father Max learns that it’s okay to ask for help back in 1993. Here’s a full recap of this new Disney Channel episode. 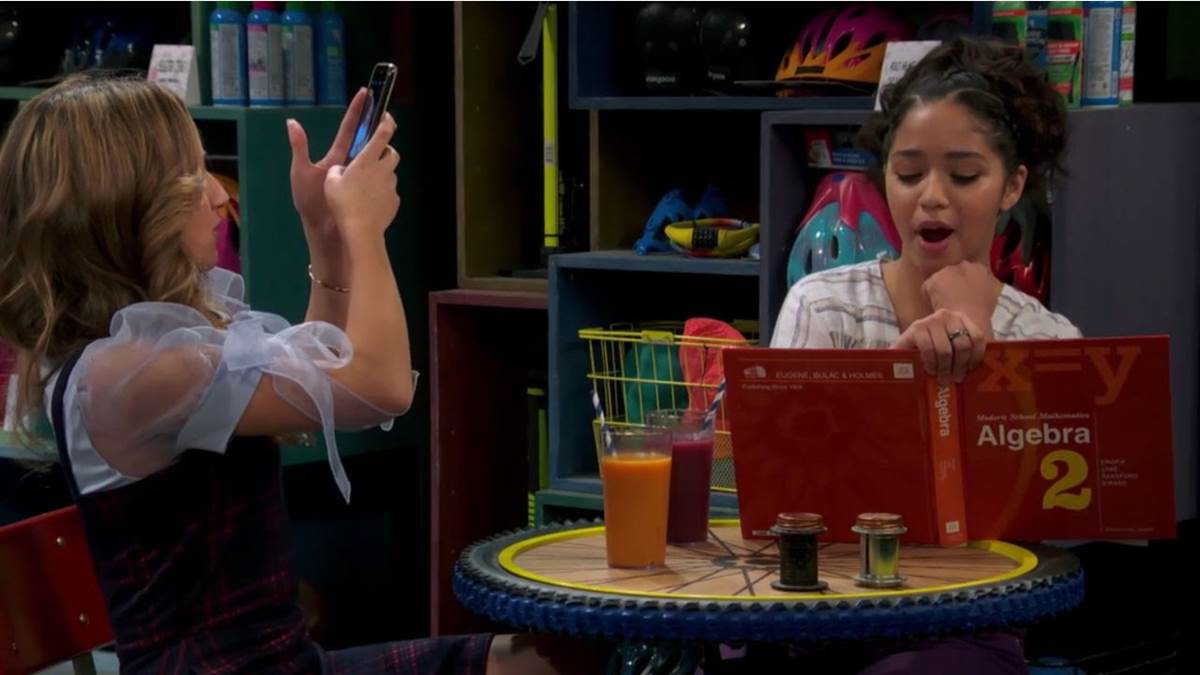 At the end of math class, Ms. Williams asks Olive to stay behind and informs her that there’s an advanced class she thinks she should move to. Outside in the hallway, Olive tells Sydney the good news because Olive loves math. Sydney is confused that she didn’t get asked to join the advanced class, too, telling Olive they’re probably telling students one at a time. Olive heads to her next class and Ms. Williams approaches Sydney, who thinks she’s about to be asked to join the advanced class, too, but the teacher just wanted to return the sweater she left behind.

After school, Sydney goes to Ms. Williams’ class and asks the teacher about the advanced math class. “It’s not that you’re not doing well… but this new class is going to be very challenging,” the teacher tells her. Sydney argues that she can rise to the occasion and Ms. Williams says she will move her to the advanced class if she really wants to, with the understanding that she can go back to the regular class if it doesn’t work out.

Olive enters Reynold’s Rides and excitedly shares the news with Max, asking for a smoothie. Sydney enters soon after and tells Olive and Max that she got in the advanced class too, both of whom are surprised. Grandma Judy tells the girls that she’s in a tough philosophy class too, but shares that she’s taking it because the teacher is cute. Max delivers smoothies to Sydney and Olive at a table and Sydney takes a celebratory selfie of the two of them, asking Olive to take pictures of Syd with her new Algebra 2 book. She immediately posts it on social media to brag about getting in the advanced class. Sydney suggests that she and Olive study together, but Olive tells her she wants to study on her own because she needs to focus.

That night, Judy finds Sydney working on her math homework and Syd asks her grandma to check her answers against a guide in the back of the book. Sydney only got one question right, so she calls Olive telling her there’s an emergency. When Olive arrives, Sydney offers her double chocolate cupcakes, saying she made them to celebrate. Olive says she can stay for one, but has to get back home to study. Sydney pulls out her homework and tells Olive that while she’s there, she can help her with one of the questions. Shortly after Olive leaves, Sydney opens her laptop to video call her to ask about another question. Shortly after hanging up, Sydney calls her back again and when Olive tells her she needs to focus on her work, Sydney tells her that she would do anything to help her in another class if the roles were reversed. Olive feels guilty and helps Sydney with the rest of her assignment.

In class, Ms. Williams passes back test results and Olive is upset because she got a B. “Thanks for nothing, Syd,” Olive says, telling Sydney that she didn’t have time to study because she was helping her with the homework. Olive adds that Sydney shouldn’t even be in the advanced class and that she joined it for the wrong reasons. “The next time you realize you have no idea what you’re doing, you figure it out,” Olive tells Sydney.

Max has been using Sydney’s placement in the advanced class as an excuse to gloat and give a neighbor a taste of their own medicine, because they always put bumper stickers and signs out to brag about their children’s accomplishments. Earlier, he had a bumper sticker made and he enters Sydney’s room with a yard sign that says “Proud dad of a math genius.” Sydney tells her dad about the fight with Olive and that she got a D- on the test. He asks her if the class is right for her. “Of course it is, I just need to study harder. I’ll work all weekend.” He asks her why she's working so hard to be in the advanced class when she doesn’t even like math. “You don’t have to be the best at everything. And just so you know, I don’t need a yard sign or a bumper sticker for the world to know how proud I am of you.”

The next day, Sydney finds Olive in the math classroom and apologizes. Olive accepts her apology and Sydney tells Olive that she’s back in the regular math class. They hug and reaffirm their friendship.

Max is in his garage supping up his skateboard when Alisha comes roller skating in. She tells him that he should get a pair of skates so they can hang out together at the roller rink. He tells her skating will be a breeze since he’s so good at skateboarding. When she leaves, Max asks his mom if she will buy him roller skates and she makes him admit that he wants them to spend more time with Alisha before she agrees to get him a pair.

So convinced that roller skating will be easy, Max denies his mom’s offer to help him skate. Alone in the garage, he crashes over and over again in a montage. Later, Alisha comes to the door and tells Max that he will be eating her dirt at the roller rink. He tells her he’s not going because he’s a skateboarder and skating isn’t cool. “I skate, so am I not cool?,” Alisha asks, upset as she leaves. Judy overheard the conversation and some out to talk to Max, telling him he should be honest about not being able to roller skate. She says she would probably think it’s sweet that he wants to learn to spend more time with her. “Don’t worry about Alisha,” Judy teases. “I’m sure she’ll find someone else to skate with. Maybe they’ll even hold hands.”

Max called Alisha and told her she forgot something, but when she comes over he admits that he just wanted to apologize. He comes clean, telling her that he couldn’t skate when he tried. “I was embarrassed and afraid you’d laugh at me.” Just as Judy predicted, she thinks it’s sweet that he wants to learn how to skate for her and she offers to teach him.

Back in the garage, Alisha starts by teaching Max how to stand, eventually getting him to the point where he can skate slowly. She holds his hand as they skate around the garage in circles. “You’re going to get this in no time,” Alisha tells Max. “I don’t know, I have a feeling this is going to take a while,” he smiles.

Next week, Disney Channel will air two new episodes of Raven’s Home followed by a special puppet short instead of a new Sydney to the Max, but we’ll be back with more episode recaps when the next episode airs.