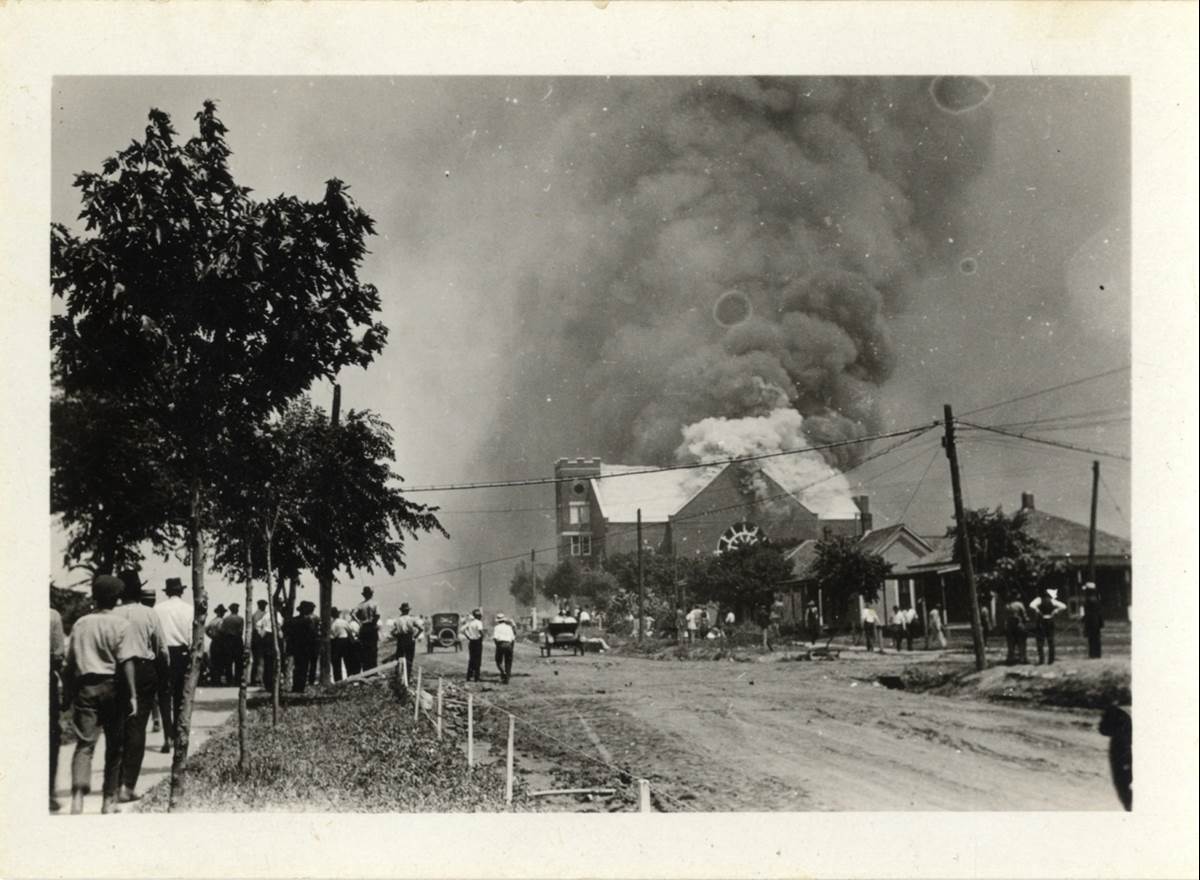 Photograph Courtesy of Department Of Special Collection, McFarlin Library, The University or Tulsa

Hosted by Amy Briggs, this episode starts with some historical context from Scott Ellsworth, author of Death in a Promised Land and The Ground Breaking: An American City and Its Search for Justice. The city of Tulsa rose to prosperity due to an oil field discovery, which generated a lot of money for the city. Even though Black people weren’t allowed to work in the oil industry, the booming city created a lot of jobs for African Americans and segregation laws necessitated the creation of the Greenwood District.

Most of the Black residents of Tulsa worked in the white community, making good money at a consistent pace, and spent it in Greenwood to avoid the discrimination and problems they faced while shopping and dining in the white areas of the town. Greenwood prospered and became known as “Black Wall Street,” even building up the wealthiest man in Greenwood, J.B. Stradford, the son of a freed slave who went on to graduate from Oberlin and then Indiana law school. He founded The Stradford Hotel, an elegant facility that would be valued at about $2 million today if it were still standing.

1917 to 1923 were violent times in the U.S. for Black communities, with white mobs routinely descending on prosperous Black communities to tear them down. Greenwood was an incredibly prosperous community in Tulsa with two movie theaters in addition to a plethora of restaurants, grocery stores and even its own physicians, lawyers and real estate agents.

While the exact events leading up to the massacre weren’t documented with accuracy, Scott Ellsworth shared what he believes to be the most likely chain of events based on interviews with survivors paired with what was written in the White newspapers at the time. A 19-year-old shoe shiner named Dick Rowland entered the Drexel Building in downtown Tulsa to use the restroom on the top floor because he wasn’t allowed to use them where he worked. The elevator was operated by a 17-year-old white girl named Sarah Page and somehow, her dress got ripped by Rowland, plausibly due to tripping and trying to break his fall. Page screams and Rowland realizes he’s in a bad situation and runs away, prompting a nearby store clerk to call the police, which leads to a special report in the afternoon edition of the Tulsa Tribune.

In the sensationalized piece published on May 30th, 1921, the writer embellished the story to claim that Dick Rowland had been stalking Sarah Page leading up to an intentional attack in the elevator. The article called for members of the community to take action by lynching Rowland, leading to a mob of White men to gather outside the courthouse for that purpose. A group of armed African American World War I veterans arrived at the courthouse to defend it and the sheriff told them to leave.

A riot began at the courthouse when a white man tried to take a gun from one of the Black veterans, causing a shot to go off during the struggle. The mob was ignited and fanned out through the city, gathering and hatching a plan to invade Greenwood at dawn. The exact number of White people who descended on Greenwood on May 31st, 1921 is unknown, but it was likely in the thousands. They gathered in groups around Greenwood and when a siren blared, they began their systematic destruction. There were reportedly even airplanes flying overhead dropping sticks of dynamite. All 35-blocks of the once prosperous Greenwood district were destroyed.

The death count is unknown, reported to be anywhere between 75 and 300. Many of the bodies were buried in unmarked graves that are  now lost. Afterwards, the story was actively suppressed. Official records of the event went missing and the Tulsa police went around to photography studios in the city to confiscate photos from the event. White newspapers didn’t cover the story and by the 1970’s, researchers trying to find information on the event had their lives threatened.

In the late 1990’s, Scott Ellsworth began interviewing survivors, who hadn’t talked about it in decades and were still suffering PTSD from the massacre. Once reports started to get published about the Tulsa Race Massacre, scientists began looking for the lost grave sites. Tulsa Mayor G.T. Bynum recently reinvigorated the search for the graves and last fall, radar found evidence of coffins underground with no tombstones. Archeologists will begin excavating this June to try and determine if these are the bodies of victims of the massacre.

Forensic anthropologist Phoebe Stubblefield joined Amy Briggs for this part of the conversation, her parents having grown up in Tulsa. Her parents never told her about the massacre, but when Phoebe told them about the project, she learned that she had an Aunt who lived in Greenwood and lost her home when the area was destroyed. With her specialized background, Stubblefield hopes to be able to identify the gender and race of the bodies, as well as evidence that reveals how they died.

J.B. Stradford, the richest man in Greenwood, lost his fortune after the massacre and was falsely charged for a crime. He was able to flee to Chicago and died in 1935, depressed about the loss of his fortune. When Amy Briggs assigned writer Tucker Toole to write a story for the 100th anniversary of the Tulsa Race Massacre, she didn’t know that he was a descendent of J.B. Stradford and how personal the assignment would become.

Tucker Toole got to dig into his own family history for the assignment, interviewing his grandfather Theron C. Toole. Stratford’s legacy had been disparaged, citing him as an instigator in the riots, a cimr that was excused through an honorary executive pardon in 1996 when the family worked hard to repair his name. He also learned about the generational impact of the event, his own family missing out on the generational wealth that should have been passed down to them.