Emma Stone and Emma Thompson: It’s Fun to be Bad in “Cruella” – Behind the Scenes of the New Disney Film On May 28th, audiences can experience one of the greatest Disney Villains of all time like never before in Cruella, starring Emma Stone as the “Perfectly wretched” title character and Emma Thompson as her nemesis, the Baroness. Set in the 1970’s, the film offers an origin story for Cruella de Vil in this reimagined take on an animated classic. In advance of the film’s release, the stars and creative team shared some of the movie making magic that made this new adaptation of the character so compelling.

“It was six years ago,” Emma Stone revealed about how long ago she became involved with the project, back when it was just a concept without a fleshed out storyline. “It was a process of about four years and different writers and different things were brought to the table, and it really felt like we might not ever really make the movie of Cruella, because even though she's such a fun and interesting character, what world would we all want to explore her in that would really make sense and make a good film, that didn't feel shoehorned into this character?… Once Craig [Gillespie] and Tony [McNamara] came on board, it really started to kind of fly and get very exciting, and it was like, oh my God, we're making Cruella. It's unbelievable.” 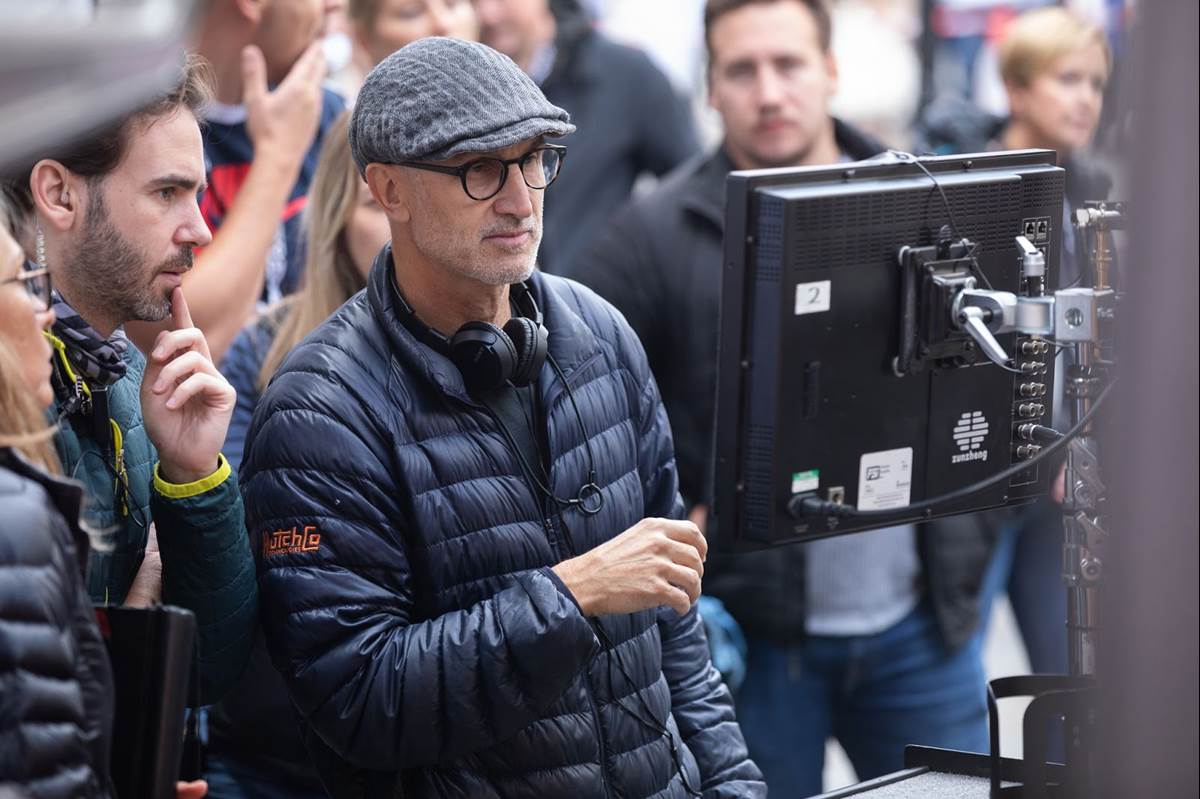 Director Craig Gillespie’s previous films have included Disney’s Million Dollar Arm and The Finest Hours in addition to the critically acclaimed I, Tonya. “Villains are always so fun to portray because you just have more license to do things that aren't quite appropriate or push the boundaries and create these larger-than-life characters,” the director shared. “It was really important to me that it was not black and white, obviously no pun intended there with Cruella, but I wanted there to be this gray area and be able to empathize with the choices that she was making and the situations that she was responding to. And I wanted to do it in a way that was really fun.”

If you’re taking a Disney Villain and making them the central character that the audience roots for, you need to give them an equally powerful nemesis. Enter Dame Emma Thompson as The Baroness. “I had such fun doing her because I think I've been asking for quite a number of years if I could be a villain, a proper villain,” the two-time Oscar winner explained. “I spent decades playing what my mother used to call, ‘Good women in frocks.’ Now I got to play a really evil woman in frocks, but oh boy, the frocks! I mean, they wore me, actually, really is what happened. I had just the best, best time. And every time [Emma Stone] and I would come on set, we'd just look at each other and walk around each other like we were sculptures or works of art or something, which we were. In a way, everyone created The Baroness, and then I sort of stepped in and just said the words.” 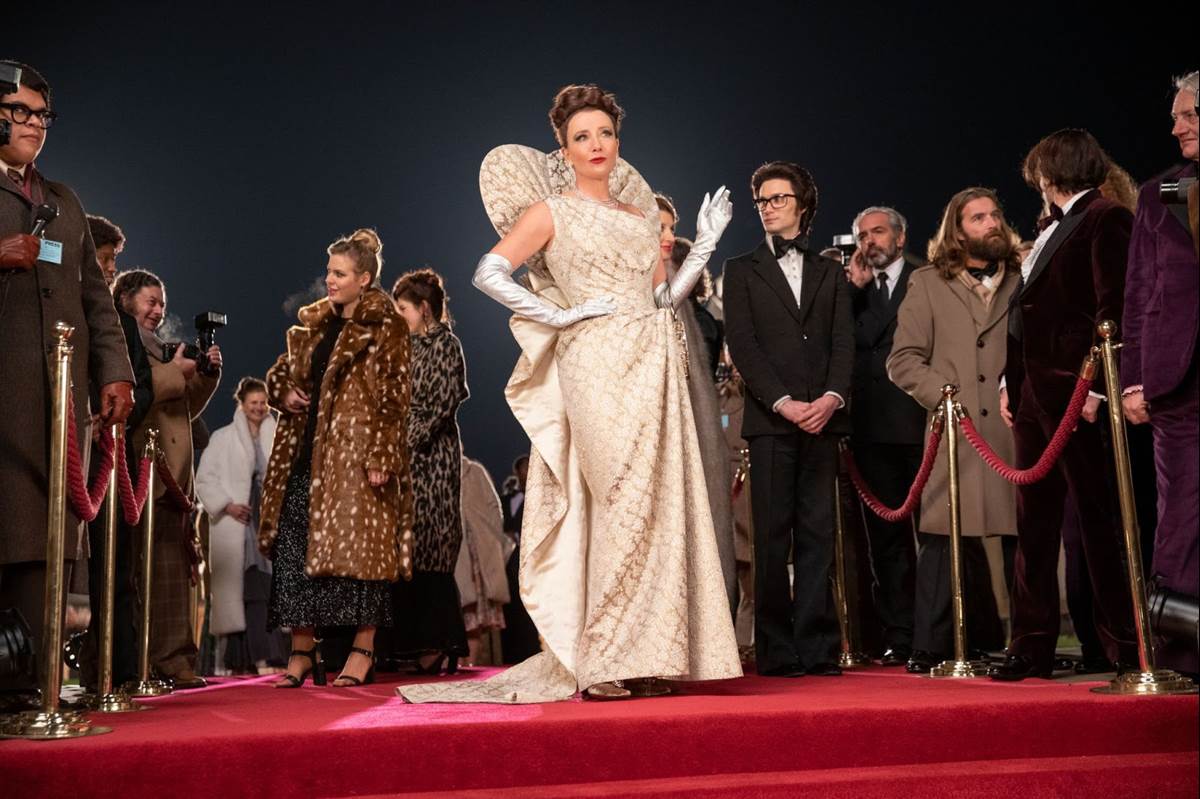 With two incredibly fashionable main characters, someone behind the scenes had to actually make the costumes they wear in the film. That someone is none other than Jenny Beavan, Oscar-winning costume designer who has leant her talents to White Fang, Christopher Robin and The Nutcracker and the Four Realms. “I always say, in case people get the wrong impression, I'm not a fashion designer, I'm a storyteller with clothes,” Jenny corrected. “In fact, in my real life, I have no interest in clothes, I just love telling stories with them.” Cruella de Vil not only had her Marc Davis animated version, but Glenn Close’s live-action portrayal as reference for the costume designer. But Emma Thompson’s character was built from scratch for this film. “The Baroness is actually terribly clear once you get into that mindset of who she is and where her influences came from and her current situation. And it was obviously a slight Dior, Balenciaga, all those great '50s, '60s, fashion designers. And she's a very good designer, she's just slightly past her sell by date.”

While this version of Cruella de Vil gets a little more bold and daring with her fashion choices, one thing that remains true is her iconic black and white split hair style. But bringing it to life on screen was more difficult than the filmmakers could have predicted. “It was really busy at the time that we shot in terms of wig makers, and we couldn't get the white hair,” hair and makeup designer Nadia Stacey shared. “It's really hard to get hold of because it has to be processed in a particular way. I only had two wigs for a long time so I kept using these wigs, and then changing them.” While Emma Thompson certainly sports Cruella’s signature straight hair look in numerous scenes, the creativity of the costumes allowed for more freedom with the hair styles. “When I saw what Jenny was doing and how much she was changing up the costumes, it kind of all worked,” Nadia added when asked about the hair that accompanies many of Cruella’s new looks. 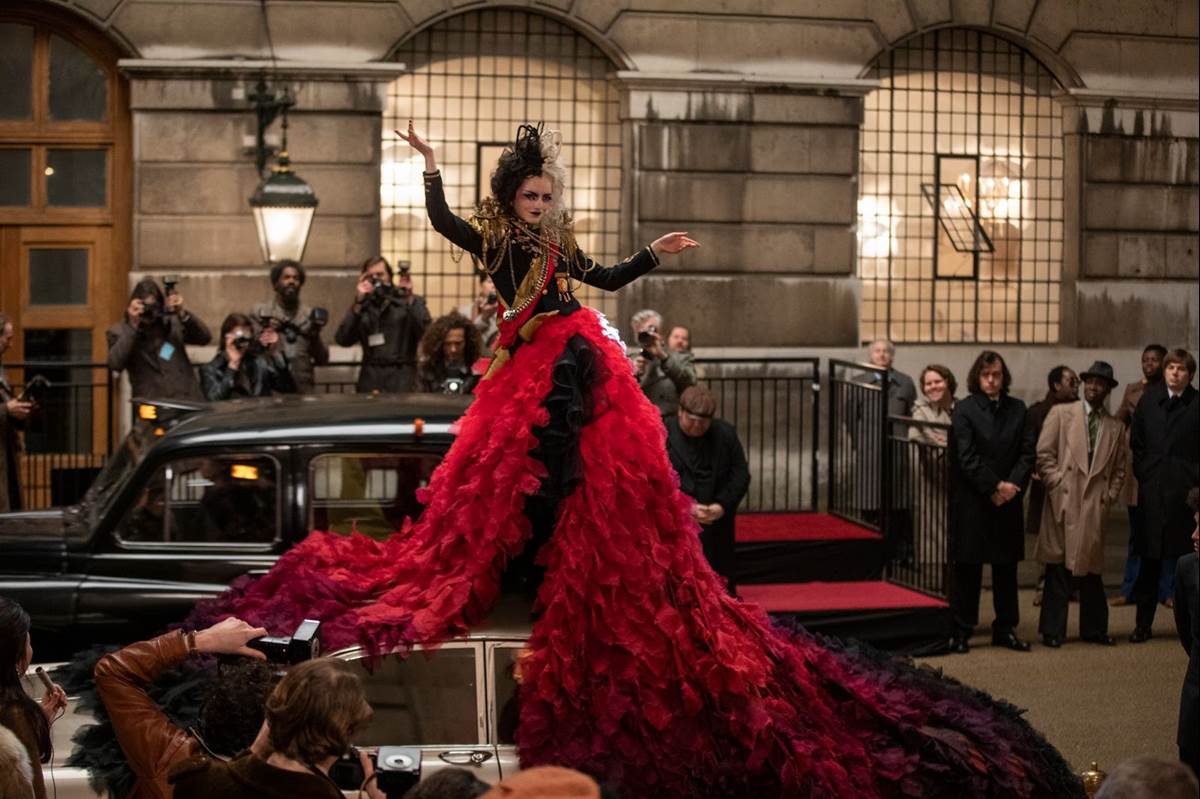 “My very, very favorite outfit that was absolutely ludicrous was the dress that I wear on [a] garbage truck because there was a 40-foot train,” Emma Stone revealed when asked about her favorite costume from the film. “That wasn't attached to the dress because, obviously, I wouldn't be able to move anywhere, so they added that onto the dress at the last minute when I got onto the garbage truck to shoot that part. And it was just, I mean, nothing you would ever be able to even remotely wear in real life.” Director Craig Gillespie added that the train was connected by wires to the back of the truck to give the illusion of it being one continuous piece and that they had to film the sequence at 3:00 am on the streets of London.

While fashion is a passion that consumes Cruella’s ambitions, we know that someday she had to become obsessed with spotted dogs, so they must play a role in this origin story. “The dogs are a large part of all of 101 Dalmatians, but I wanted to bring them in in a more grounded way,” Craig Gillespie shared about his approach to incorporating canines into the film. “We worked on the story a lot with the role of the dalmatians and her relationship to them… They're very intertwined with her emotional journey. And then also having these mutts that were part of their crew… They were supporting characters in a way, and they had their own personalities and concerns.” 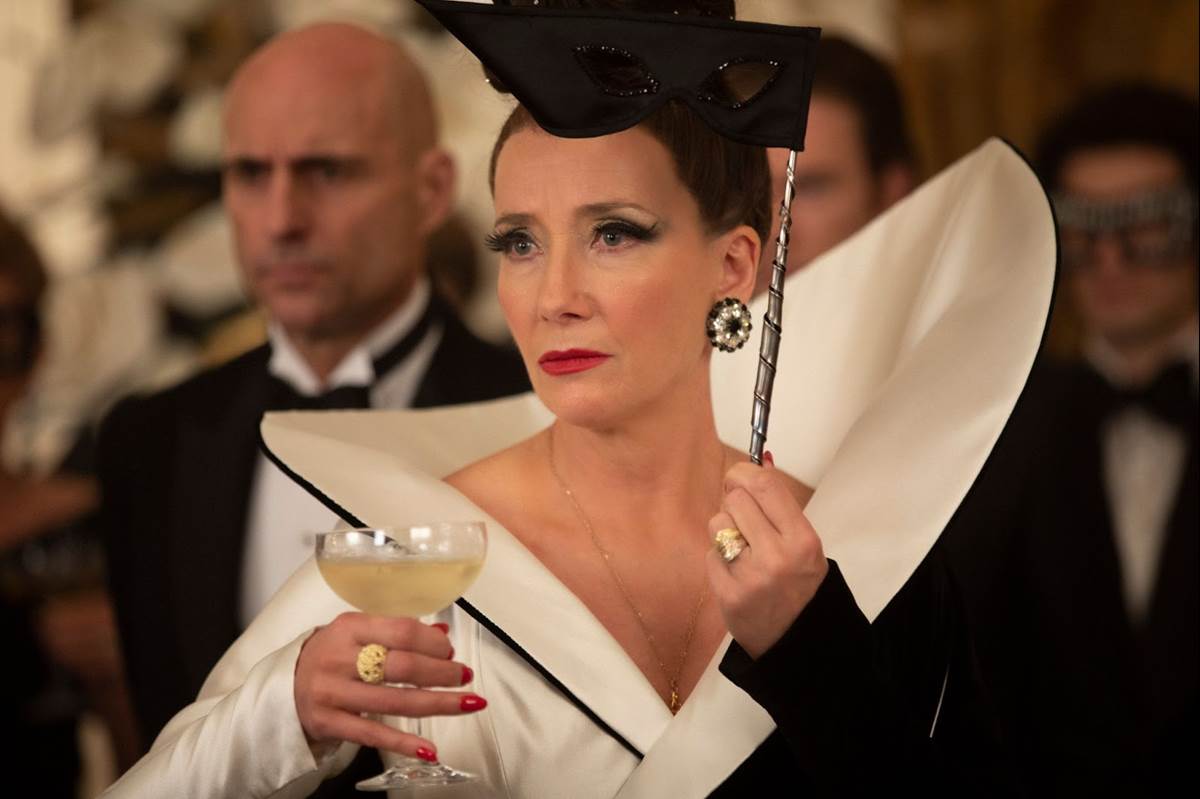 “They were great and they were very sweet,” Emma Thompson shared about the trio of dalmatians that The Baroness uses as her own security detail. “They have CGI'd them to be a bit nasty because they were such sweet dogs. They were so nice and they worked so hard.”

Before Cruella took up that title, her name was Estella and her first best friend was a mutt. “Estella's dog, Buddy, whose real name is Bobby, I genuinely think he was the cutest and sweetest dog I had ever known in my life, and I've got a lot of dogs, so that's saying something,” Emma Stone shared about the animal actor she spent most of her screentime with. But if there’s a dog who steals the show, it’s a one-eyed chihuahua that belongs to Horace named Wink. “I tried to get Wink fired,” Emma Thompson joked about the adorable costar. “I told stories, I said he'd come and widdled on one of my costumes and nobody believed me. They just knew I was lying and that it was just a vicious attempt to get rid of this dog that was, frankly, upstaging me and getting in my light.” 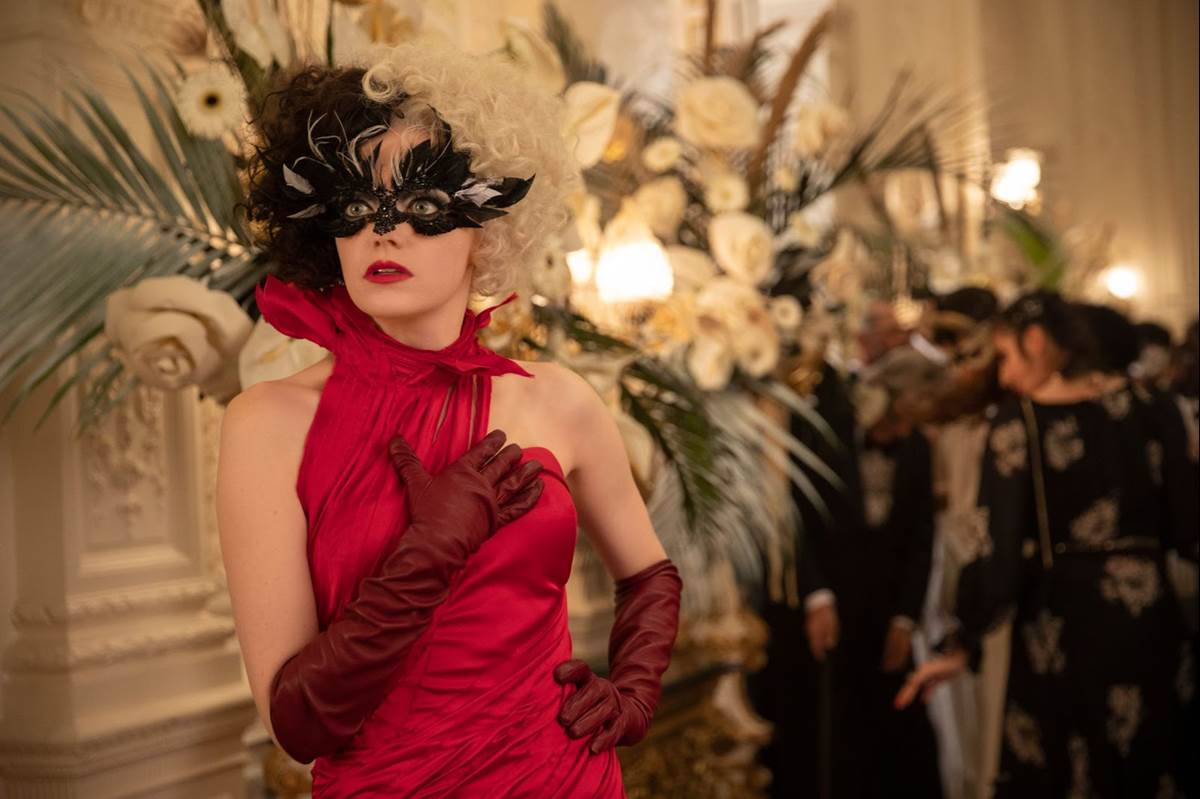 You can see Emma Stone and Emma Thompson go head-to-head in 1970’s fashion and glamour on May 28th when Disney’s Cruella arrives in theaters and on Disney+ with Premier Access.