TV Recap: “Gabby Duran and the Unsittables” – Gabby Needs a Day Off in “Gabby’s Big Break”

The second season of Gabby Duran and the Unsittables continued this week with a new episode called “Gabby’s Big Break.” Overworking herself to the point of exhaustion, Principal Swift asks Gabby to take a break and things don’t go so well. Meanwhile, Olivia and Jeremy get into a battle with their pets. Here’s a full recap of the latest episode. 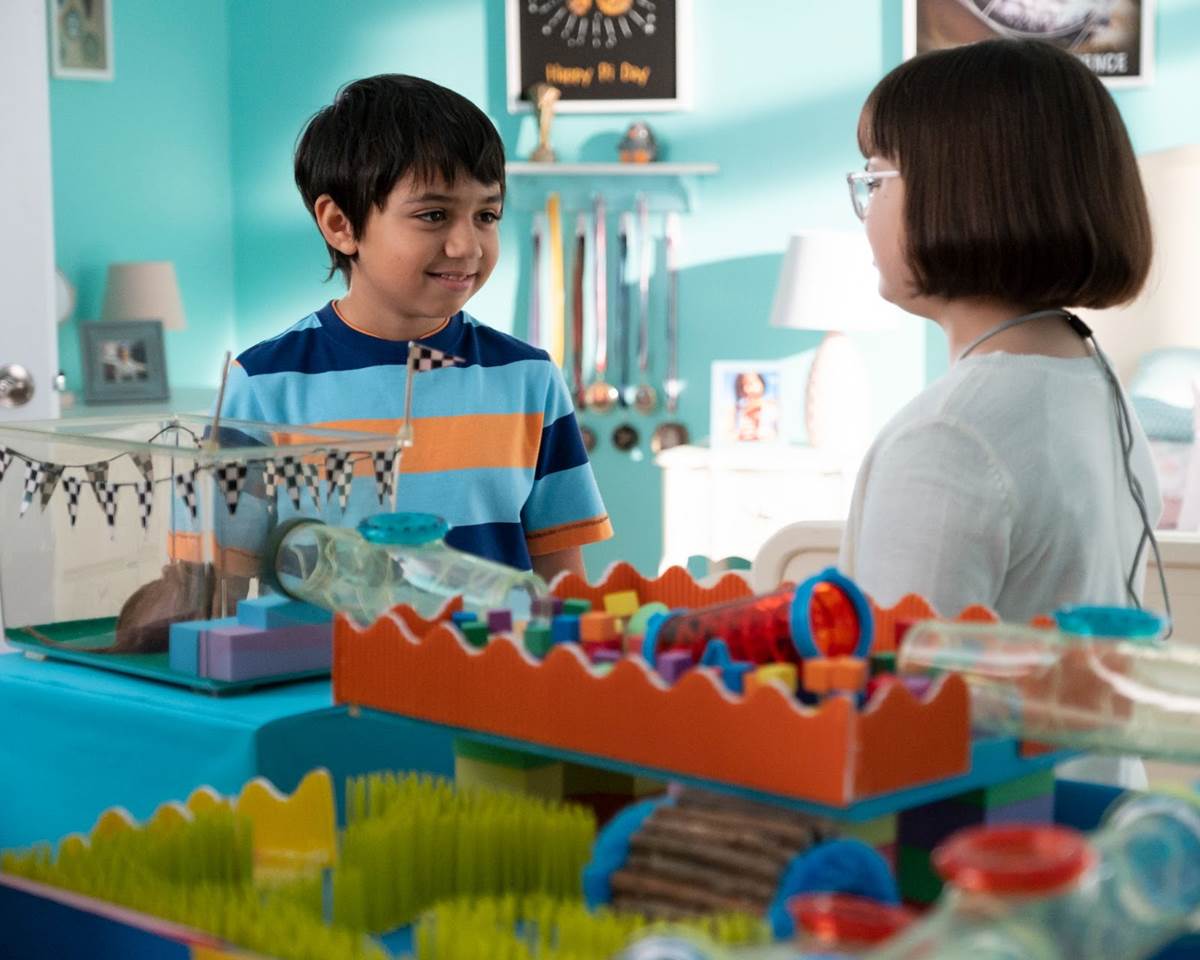 Gabby walks into school yawning, her hair in a messy bun. Wes notices her change in appearance as Gabby tries to open the wrong locker. She confesses to having worked late last night and having several gigs lined up after school, including babysitting a new client. “Have you ever thought about taking a break?,” he asks her. Gabby talks about how she has the coolest job in the world and doesn’t want to do anything, entering what she thinks is her classroom but is actually a janitor’s closet.

Olivia is timing her gerbil Henrietta through an obstacle course for a science project when Jeremy comes in looking for Gabby. Olivia shows off her pet, but Jeremy tells her his “Blurble” could do the obstacle course faster. Cut to Olivia at Jeremy’s house meeting a purple fuzzball with big yellow eyes that can self replicate and fuse back together. Jeremy named his blurble “Jeremy.”

Gabby’s new babysitting gig is for a kid named Rooney, who has yellow skin on his face and a brown furry body. He’s an inventor and shows off some of his devices, claiming that he has to do three versions to get each one right. Gabby sits on the couch as he shows her a gun that can blast stuff into other dimensions. She falls asleep and when she wakes up, Rooney’s parents are standing over her upset and Rooney has blasted a hole in the wall.

Principal Swift calls Gabby to his office and tells her he’s overworked her. “I hereby suspend you from babysitting aliens.” Gabby is horrified by the idea of taking a break from babysitting.

Gabby finds Wes eating at Luchachos the next day with a manic look in her eyes. He asks if she got any sleep and instead, she stayed up all night. She tried calling all the alien families to book secret gigs, but Swift already contacted them all. She then hatched a plan to force Swift to change his mind, unrolling a deranged plan that involves abducting Principal Swift and tickling him until he agrees to let her babysit again. Wes tells Gabby she really does need a break as she leaves.

Gabby goes stir crazy at home, trying to find something that brings her joy. In a box of stuff from when she lived in Miami, she finds a binder full of mix CDs, an old hobby of hers. One is called “Get Hyped” and the last one in the binder was called “Moving to Havensburg.” Gabby calls Wes and hears in the background that he’s subbing for her, babysitting Rooney and tossing frozen chicken nuggets into other dimensions. She tells herself not to go over there, but she can’t resist the temptation.

Meanwhile, Olive arrives at Jeremy’s house for the race, with an elaborate course set up in the basement. While she and Jeremy argue over which pet is better, the blurble locks eyes with Henrietta the gerbil and falls in love. Orb announces that the pets have left and Olive and Jeremy realize the door was left open.

Wes is about to toss a deep dish pizza into Rooney’s dimension blast when Gabby opens the door to his basement, bumping Rooney’s arm as the blaster points at Wes, zapping him into another dimension. Freaking out, Rooney drops the gun, which blasts into the air and sends him away too. The blaster crashes to the floor and the canister of glowing green goo that powers it breaks. Gabby calls Principal Swift, who comes over to help. Gabby finds the previous version of the portal blaster, but it has two bicycle seats attached that both have to be peddled fast to power it. They try and can’t move fast enough. Gabby says she needs to get “Hyped.”

Olivia and Jeremy call for their pets and find them in a wooded area. The blurble has replicated itself into an audience, an organ player, and an officiant. Henrietta is in a white wedding dress. “Jeremy” the blurble coughs up something purple and sparkly and Jeremy tells Olivia that it’s part of his heart, a blurble marriage ritual. Henrietta eats it. Jeremy tears up over how beautiful the ceremony is.

Gabby returns with her “Get Hyped” mix CD, putting on headphones to listen to it as she pedals. She can’t hear him, but Swift says he wishes she would “Share the hype.” They peddle fast enough to open the portal, with Wes and Rooney falling back into the basement. A giant dark leg comes poking out and Wes fights it back inside the portal as it closes. It turns out they were sent to a dimension of giant spiders. They look over at Gabby on the bike, who has fallen forward asleep.

Two days later, Principal Swift waits in his office for Gabby, who admits that she needed the break. She hands him her portable CD player with “Get Hyped” inside and he puts the headphones on, grooving and shouting “Oh yes!”

The next new episode of Gabby Duran and the Unsittables premieres Friday, June 18th, titled “The Vibe,” Here’s the official episode description from Disney Channel:

Gabby is initially resistant when she discovers that Wes and Sky are into each other, fearing a change in the “vibe.”