After Luz and her friends are expelled from Hexside, Luz approaches the Blights and strikes a dangerous deal to get herself and her friends back into the school in the latest episode of The Owl House. 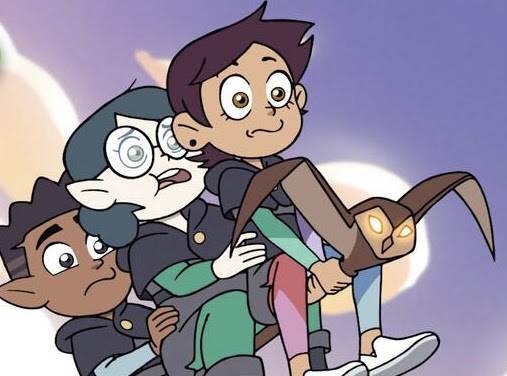 Blight Industries, founded by Amity’s Parents Alador and Odalia, is hosting a private investor’s demonstration where Amity is acting defenseless against a militant Abomination to make the product look good as part of a punishment for her poor school performance as of late. Things get too real though when Amity drops a picture of herself with Luz, Gus, and Willow and it's about to be destroyed by the creature, whom she takes down easily to save her printed image of her friends. Her mother is incensed at the amount of money they just loss, and realizes what…or rather, who… has been distracting her daughter.

Meanwhile, at the Owl House, Luz is holding her own demonstration of sorts teaching Eda and Lilith the basics of glyph magic, demonstrating the glyphs for plants, ice, fire, and light because…that’s all she knows. Lilith and Eda are sitting at their desks channeling their younger selves where Eda is trying to get ahead of by thinking outside the box and Lilith taking the more traditional approach. After Luz leaves for school, Eda is inside the house with King trying to come up with new ways to build the glyphs and combine them into different spells. None of which work. Growing increasingly frustrated, Eda looks outside and sees Lilith mastering her craft with Hooty who is not shy in hiding how impressed he is.

At Hexside, Luz is seeing Willow and Gus (who has gone through witch puberty, explaining a much deeper voice than last season) for the first time since the petrification incident (last season’s finale). While reuniting, the school’s P.A. system kicks on and everyone can hear the presidents of the P.C.A. (Parent Creature Association), who happen to be Amity’s parents, demanding that he call Luz Nocero, Willow Park, and Agustus Porter to their office. Oh, and Amity too.

They gather in Bump’s office and citing the list of incidents (a subtle recap of last season) they pressure the principal into expelling the students, except for Amity. They just wanted her there so she could see what happened to her friends. As they are being shoved off school grounds, Amity’s Mom tells Luz that she appreciates her tenacity, and if she ever wants to make a deal to give her a call before handing over her business card.

The trio try to appeal to Bump’s sympathies to allow them back into the school in a montage of various efforts before the audience sees how sad he is, even saying “life is so dull without them!” As they regroup to make a new plan, two angry birds show up screaming messages from Willow and Gus’s parents saying how grounded they are before whisking them back home. Luz retrieves the business card and decides to approach Amity’s mom about a deal.

Back at the Owl House, Eda and Lilith are still practicing their glyphs when Eda shows King a new idea and starts making a formation out of ice that is getting a bit out of control, freezing anything in its path. While Eda believes she can contain the problem herself, she refuses any help. Only when King gets absorbed into the ice does she admit to Lilith that she needs assistance with her glyphs.

Luz gets to the Blight Residence to strike the deal with Amity’s Mom when an abomination answers the door, which she sculpts into a fun cat face. As she gets to Amity’s parents, they explain that they are showing off some new products but since Amity is busy with schoolwork, they need someone for their demonstrations. Alador explains that the abominations are for home use but they all specialize in weaponry. Amity shows up to help her parents, but sees a note saying they got a replacement, curious, nay worried, about who that may be, Amity asks the abomination if anybody came over and puts two and two together when she saw the shoddy attempt at a cat face. As Willow and Gus are being punished (keep an eye out for an Amphibia easter egg), Amity gets them to help her get Luz out of the trouble she’s found herself in. What trouble? The Abomoton 2.0, a militant abomination who won’t rest until their enemy is completely eliminated.

A chase ensues throughout the warehouse with Luz using her magic to protect herself before pleading to Amity’s parents that the audience gets the idea, maybe she should let up, with Alador even agreeing with her. Just as Luz is cornered, Amity appears telling the abomination to “stay away from my Luz!” and helps defend her from the Abomaton. While arguing with her mother, Amity strikes a deal (No Blight ever breaks a deal) with her mom that she won’t destroy their Abomaton in front of the investors if she lets her friends back into the school. Begrudgingly, she agrees, and the sale is a rousing success. She tries to go back on her word, but Alador reminds Odelia that a Blight never does that, and mentions that “she is getting stronger. She could be a coven head.” But is he talking about Amity?

The growing ice cube at the Owl House was stopped by Lilith, but how? Turns out Eda was right. Kind of. You can combine glyphs to make different spells but you can’t do them all at once, so Lilith developed (and put a copyright) on the “Glyph Combo” to stop the whole thing. The pair tries to show off their new discoveries to Luz but she is too tired after her long night, but does see the beginnings of it as the two sisters ask their new teacher for extra credit.

Back at Blight Industries, the Golden Guard comes in to tell Amity’s parents that Emperor Belos will be purchasing every Abomaton as he “doesn’t take kindly to citizens building private armies.”

This episode and other episodes of The Owl House are now available on Disney Channel and the DisneyNOW App. The entire first season can also be streamed on Disney+.