We all know him as the King of Demons, but where did King come from? Who is he? WHAT is he? The latest episode of The Owl House takes a closer look at the resident house pet and his origins, setting up for more adventures in the future of the Disney Channel series. 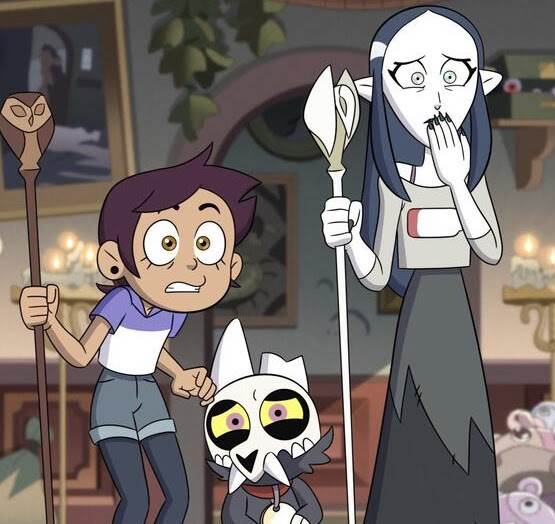 Echoes of the Past

Immediately we are treated to a flashback of Eda running into an ancient temple to take shelter from something (I’m not being vague, we really don’t know!) with something running up on her and a frightened gasp.

Luz is working on her glyphs when King needs help as he is convinced Francois (one of his plush minions) is leading an uprising. He then goes to Lilith seeking assistance, but she is also occupied with her glyphs. While King is frustrated, Luz discovers a way to turn herself invisible much to Lilith’s delight and King’s frustration. As Lilith motions to assist Luz with her efforts in discovering more glyph spells like that, King’s plush army ambushes her. Really, it just collapsed. Lilith’s new BFF Hootsifer jumps in to protect her, but Lilith advises that it’s all make-believe.

As the former lead historical scholar to the Emporers’ Coven, Lilith says that there is no such thing as a king of demons as the demons didn’t unite under a single ruler until Emperor Belos. Something to remember, perhaps? King takes the opportunity to tell her that she’s wrong and tells his tale of his reign of terror as the mighty King of Demons. A quick flashback over the vague story plays out with King being substantially larger than we know him as, until his mighty crown was taken from him. Devotees of the series (and Hootie) will remember that the crown he is speaking of came from a fast food restaurant in the human realm, but King says that one was a test to see if Luz and Eda were devoted to him, with the real crown still out there somewhere.

Lilith doesn’t buy into it, and Luz asks her to just play along with his fantasy for his sake. King goes and gets both Eda and Lilith’s staffs saying that he will prove it and take them to his castle. Luz, supporting King, and Lilith, whose historical prowess is being questioned, both reluctantly agree to go. Hootie joins them as well, but morphs, rather disgustingly, into an easy to carry backpack/birdhouse tote, called “PortaHootie.”

Just when you begin to wonder where she is in this episode, Eda comes out of the shower to find a note from King saying they all went off to his “Real” castle, and not to wait up for them. Panicked, Eda screams “Not again!” as she runs out of the house.

King shouts that they are approaching the island, and Lilith is dumbfounded. It shouldn’t be there. It’s not on any maps. The fog clears up and King sees a crumbling tower saying “Home Sweet Home.” Lilith is intrigued as they approach a blocked ruin, looking at all the symbols around the gateway, saying it predates any language she knows. She still says that King’s story is a fake, but this temple is definitely a “History Mystery.” The group illuminates a chamber to find relics throughout and stumble upon ancient carvings that depict a large creature (That looks remarkably like King) ruling over a kingdom. Lilith ponders, if she doesn’t know about this island, this temple, and these carvings, who else knows what scholars may have missed. Then, Lilith and Hootie realize, King may in fact actually be the King of Demons.

As Lilith and Hootie have King show them around to feed them more information, Luz discovers halls of temple guards when she realizes one is still alive in the, as King puts it, the Horrifying Monstrosity Room. The creature begins to chase them and when they’re cornered, a spell comes in and blasts the monster in the head. Eda appears in the doorway telling the gang to get out of the castle. Eda keeps the creature at bay, until everyone and herself get out, the creature comes after them but can’t make it past the doorway, leading the group to believe that he is protecting the castle from intruders. King wonders, if this is his castle, why is HE the intruder?

Eda takes the opportunity to give him the truth. She said that she came to the island to hide from the Emperor’s Coven and take shelter from the boiling rains. The creature she was running from in that flashback from eight years ago was a young King sneaking up on her. He had made all the relics the gang stumbled upon when they first entered the castle in the image of the guard creature. When it showed up, and assuming that King was just a stray animal, the guard tried to kill them both so she picked him up and out of the castle they went. The guard fired an arrow (that made it past the door) at the two and chipped King’s Horn. He continued to make the statues at the Owl House and Eda said “Look at you. A King amongst your subjects” and the name stuck. As he grew, she would continue to tell him what Kings do and that's where his memories came from.

King accuses her of lying, and Eda hands him the chipped off Horn she has kept with her to prove it. He holds the chip and has a flashback of his own, left alone in the castle eating flies and ruling over an army of statues that he built. But wait! The episode isn’t over, so there must be more to this story right?

After King runs away and has an existential crisis, Luz finds him and says not all of the story adds up. He has memories that weren’t caused by Eda. So they go back into the castle and Lilith and Hootie hold off the guard while Luz, Eda, and King go to the higher chambers since King has a memory of falling while hearing a loud roar.

The gang reunites to find an empty room with the guard still chasing them. King backs up against the wall which opens up at his touch. Lilith is in awe, and notes that the carvings are of the creature that has been chasing them, meaning it was meant to protect whatever was in this room. King takes the chipped horn from Eda and puts it where it belongs on him to jog his memories.

In another flashback, King remembers a deep roar,  going back to sleep and cracking through what appears to be an egg. As he stumbled out and to the door that only he can open, the guard stood waiting, picked him up, and fell back through the vertical chamber. He adds that he heard the roar, and understood somehow that it was someone yelling “Son!” King thinks it might have been his dad, and Luz suggests that maybe his dad is the one in all the wall carvings. The creature/guard comes in again and King stands in front of him and tells him to stop. Eda realizes the Guard was defending King from them the entire time, and passively agrees. Makes sense, right?

Lilith is taking pictures, documenting the castle, and realizes these are all important revelations. The group agrees to help King find whoever might be looking for him, and asks to take the guard/creature home. Everyone else says no, but Hootie says yes. Back at the Owl House, they glue the chipped horn back to King’s skull as he goes to bed and says that it’s too bad Jean-Luc (the new name of the Guard/Creature that came home with them) stopped moving as soon as they got out of the castle. Perhaps we’ll see him come to life again in the future?

Downstairs, Lilith and Eda are looking at all the pictures from the castle, trying to decipher the markings and carvings. We look at a close up of what could be King’s dad and Luz said “Whatever we discover, we’ll be there for King no matter what.”

It looks like our adventures with King’s past are only just beginning.

The latest episode of The Owl House is now available on Disney Channel and the DisneyNOW App.