One of the things I like best about The Owl House is that sometimes you feel like you’re watching an episode that seems just like an isolated adventure, but turns out to be jam packed sculpting the story to come or giving the characters more depth. This week’s episode was exactly that. 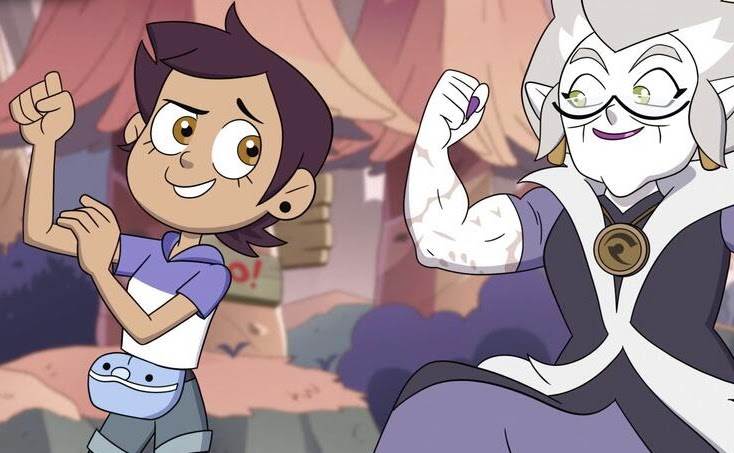 The episode starts in a flashback where Eda is younger, and telling another witch from the Healing Coven (along with her mother) what is happening to her when the curse takes over. The coven witch offers her a gem that is both stylish and functional and will show her the energy level of the curse. Eda’s Mom and the witch step out and Eda hears them outside the door, with the coven witch saying that this curse is more powerful than anything they know, with Eda’s mother vowing to find a cure, even if she has to cut the curse of her daughter herself. Eda sneaks out to run away and trips over something in the ground. She pulls out the box that we immediately recognize as the portal to the human world, opens it, and jumps in to avoid her mother.

Luz is at the Owl House with Eda trying to figure out a way to open a portal back to the human realm, which she still believes to be destroyed. We remember from the season premiere that the Emperor is busy reassembling it himself. Eda tells her good luck, since the portal was pretty old when she found it.

Across the house, we hear Lilith screaming and transforming slightly into the beast since she shared the curse with her sister. Eda helps her out and tells her stress makes it worse (an important fact to remember), but just in case of these events, she has elixirs hidden throughout the house.

Eda tells Luz more about how she found the portal door, but she was really just using it to hide from someone. But from who?

At that moment, Eda and Lilith’s mother, Gwendolyn, shows up. But it’s clear that Eda is the center of attention, with Lilith being brushed aside…again. When Gwendolyn offers up a cure for their curse, Eda quickly dismisses it. Clearly she has heard this before, especially since her mom says “This one will work!”

Luz and Lilith were convinced its the real thing, but Lilith retreats back to the house frustrated Eda sent their mom away, and Luz chases after her, desperate to help her friends.

Luz is promised that she’ll learn some information about how she might be able to open the human portal again if she helps Gwendolyn get the curse to Eda. Together they set off to find Wartlop, a magical wizard who Gwendolyn has been studying under, and a magical healer.

When we first see Wartbock, he’s healing a smaller creature, curing it of boils. Gwendolyn approaches, and hands over different expensive items, like a golden chalice in exchange for another book of healing spells, and is told not to show the book to non-believers as they will question everything in it. Together, they set out and set a trail of traps to be able to catch Eda and start curing her.

Back at the Owl House, Lilith and King are sharing their plights in terms of parental attention. As we learned last week, King was left as an egg in the middle of an uncharted island castle. Together over ice cream, the two bond over their lack of parents in their lives. Lilith says she has a few things to say to her mother and King suggests she do it since she’s right outside with Luz trying to help Eda. Frustrated and stressed that Eda is getting all the attention, again, Lilith begins to transform into a beast and can’t find any elixir, stressing her out further and completing her transformation.

Luz discovers that Gwen took all the elixir while she tries to save a stressed out Eda herself, since it’s not a natural way of healing. Gwen is looking at the book she was given by Wartlop, and sends out a raven with gems to buy a next volume when Luz catches on that this whole book of spells is a scam. Gwen doesn’t believe it, and as there are now two beasts fighting each other, they must do something about it quickly.

Gwen goes back to Wartlop and discovers several gremlin creatures planning new ads for healing mud and other nonsense products, and the creature we saw get healed earlier placing more props on his face to fake the boils he was “cured of.” She jumps in and explains to them that when her daughter was cursed, she joined the beastkeepers coven, and threatens them saying that if they don’t leave now, she’ll have every beast in the forest after them. They scatter and leave her with the piles of money they’ve collected, which is used to go buy more of the elixir that her daughters desperately need.

As the Eda and Lilith Beasts are fighting, Gwen approaches and tells them meaningful things. We usually see Eda running in a haze from the beast, but this time we see her turn around and wrangle it herself. Does this mean she now has a way to control herself? When Gwen tells Lilith as the beast that she was so self-sufficient she didn’t think to give her the attention that she was so desperate to have.

They two are given the elixir they need, and we see the three as a happy family as Lilith says she is leaving (devastating Hootie) to go live with their mother to catch up and reconnect with their dad too. Gwen keeps her promise and tells Luz something that she says she should have said at the start, that she is not the only human to have lived in Bonesborough. Gasp!

She tells her that there is a substance out there, Titan’s Blood, that is so powerful it can cause leaks between the realms. One time before, a human got through and lived in their realm, but one day just vanished. Rumor has it he left something in the library, and if Luz can find out what that is, she might figure out a way to get home and see her own mother.

She wonders, Camp must be over by now, her mom is probably worried.

We see Luz’s house in the Human Realm and hear her mother crying, before she says that these animal shows always make a mess before a hand offers a tissue out of the shadows. We hear Luz’s voice, “Here Mama,” and see a shadow figure of Luz sitting beside her mother at home, with her mother thanking her, saying she always knows what to do. What?!

This episode of The Owl House is now available on Disney Channel and the DisneyNOW App.