There has perhaps never been a bigger star in the sport of Mixed Martial Arts than Conor McGregor. When he talks, people listen. When he fights, people watch. And when he does just about anything, the UFC makes money. So it always comes as a bit of a shock to see this incredible star lose a fight, but it just makes the rematch that much more exciting.

McGregor and Dustin Poirier will face off for the third time to put their long-running rivalry to rest and stake their claim for the Lightweight Championship. Plus, two top welterweight contenders will face off with a title shot potentially on the line and two hard-hitting heavyweights will look to provide some fireworks. 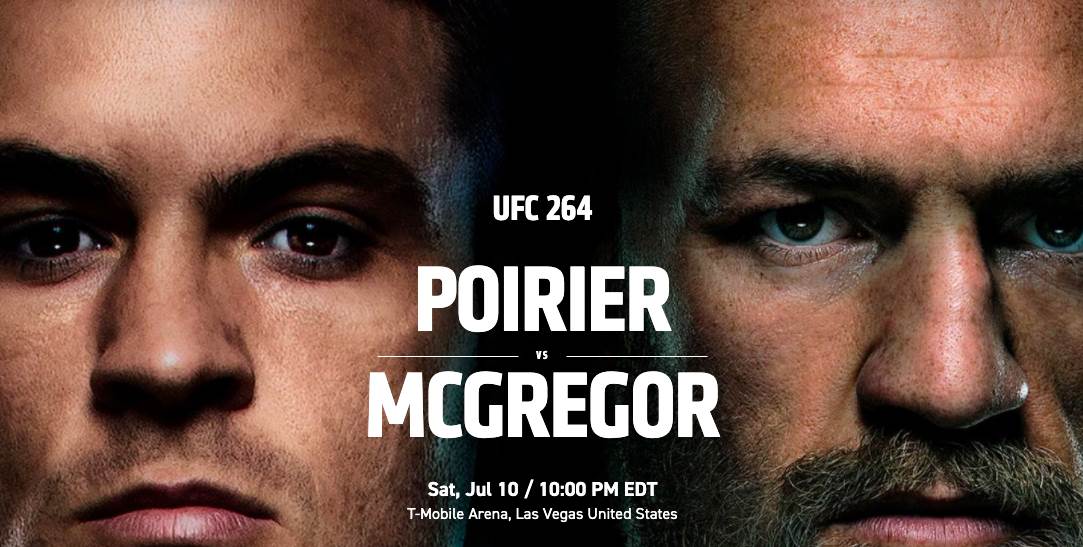 This is what we call a “don’t blink” fight. Both of these guys have one-punch knockout power and can put any opponent to sleep in an instant. Tuivasa especially is the definition of a heavy-handed fighter. In just 14 fights, he has racked up 10 knockouts to the tune of an 11-3 record. At one time, young Australian looked to be the next big thing in the heavyweight division, having won his first nine career fights. He then dropped three in a row, including a knockout and a submission. He has since rebounded nicely though, winning his last two, both by knockout, both in the first round. You can bet he’ll be looking to keep that streak going here.

And speaking of promising young heavyweights, former NFL star Greg Hardy was also on a meteoric rise in the heavyweight division before dropping two of his last four. The 32-year-old comes in with a 7-3 record and six wins by knockout. One of the most impressive athletes in the division, Hardy is likely going to want to stay on the outside and not get into Tuivasa’s range. But rest assured, both of these guys will be looking for a knockout and this one will not likely go the distance.

My pick: Tuivasa via 1st round knockout

I’ve said it before and I’ll say it again: any time you get a fight between two top five contenders, you’ve got an exciting fight. Both of these guys are former title challengers and both were incredibly close to being crowned champion. In fact, Burns is coming off of his knockout loss to dominant welterweight champ Kamaru Usman. In that contest, Burns had Usman on the proverbial ropes in the first round and came so close to claiming the crown. Now, he’s going to look to bounce back from that loss, something he hasn’t had to do since 2018. With six knockouts and eight submissions on his record, Burns will be willing to take this fight anywhere.

Thompson is much more removed from his championship opportunity. Since losing a close decision to then-champion Tyron Woodley in 2017, “Wonderboy” has won three of five and beaten some of the very best the division has to offer. Currently holding the fourth ranking in the division, Thompson could be in line for a shot at the belt with a win here. Helping is case is the simple fact that Usman hasn’t already beaten him. In a division that has largely been cleaned out by the champ, Thompson could play the role of a new challenger. First though, he’s going to have to get past Burns. And to do that he’s going to have to use his karate style to score points on the feet while avoiding Burns’ big power.

My pick: Thompson via decision The lightweight division is in a state of flux with dominant champion Khabib Nurmagomedov surprisingly announcing his retirement… wait. Didn’t we just do this? It was just six months ago when Poirier and McGregor last faced off in the octagon and now they’ll run it back, again, to finish off their trilogy with a whole lot on the line.

For Poirier, this fight comes down to one thing: confidence. In their first bout, McGregor was still in the midst of his meteoric rise to fame and Poirier let his opponent get in his head. In their second meeting, Poirier stayed calm and let his skills do all the work for him, which earned him perhaps the biggest win of his career. Now, having beaten McGregor already, Poirier will certainly have all the confidence he needs to do it again. The 32-year-old brings in a 27-6 record and hasn’t lost to anyone not named Khabib since 2016. Currently sitting as the top-ranked lightweight contender, he believes he is the rightful champ and will be looking to further that claim tomorrow night. Look for Poirier to follow a similar gameplan to their last meeting, but don’t be too surprised if he mixes in some grappling to keep Conor on his toes.

As for McGregor, the once dominant champion is now just 3-3 in his last six fights. However, one thing McGregor has never done in his career is lose two fights in a row. In fact, he’s been in this exact situation before. After losing to Nat Diaz in 2016, he came back for a rematch just five months later and avengers that loss. McGregor improved greatly from the first fight to the next and will likely do the same against Poirier. He is not one to make the same mistake twice. As for his gameplan here, Conor has never really been predictable. He almost always looks to strike, but seemingly never concerns himself all that much with what his opponent wants to do. Luckily, he has the skills to back that kind of attitude up and a left hand that can end a fight at any moment.

My pick: McGregor via 4th round knockout