One of the most iconic and beloved attractions at the original Disneyland theme park in Anaheim California and Walt Disney World’s Magic Kingdom is Jungle Cruise, which has undergone a wide variety of changes over the decades since first opening in 1955. This week sees the official opening of the latest overhaul to the world-famous boat ride, in advance of the new Jungle Cruise film it inspired.

Last week at Disneyland, Walt Disney Imagineers Kim Irvine and Susana Tubert sat down with members of the media to discuss the new updates to the Jungle Cruise attraction, the necessity of inclusion, and the layering of story and character into this adventure through the jungle river.

During his introduction to the event, Disneyland Resort President Ken Potrock said, “This is such an important attraction to us. It is one of the original attractions from opening day– one of Walt's attractions. It will be 66 years old in just a few more days, so we are very excited about this iconic attraction and all of the things that it brings to our guests, all the memories and new memories that it designs.”

Walt Disney Imagineering Executive Creative Director Kim Irvine began the discussion by explaining the origin of these new changes in the context of the ride’s long history. “We've been working for months now on these improvements. It was really a work of love and of collaboration. To actually see it come to fruition finally, actually installing these pieces that we've just seen on paper for all these months, is really exciting. It's an original attraction and it’s seen many, many changes through the years. Harper Goff was the wonderful art director who had just come off of doing 20,000 Leagues Under the Sea. He brought along with him one of the model builders that made the special effect octopus in the film. He created these fun little crocodiles, but they're pretty crude when you look at the films of them today. According to my mentors, after a few years, Walt began to realize that people really wanted something that was a little bit more entertaining.”

“So he brought in Marc Davis, who had just finished putting some humor into the Mine Train Through Nature's Wonderland, and said, ‘Let's do some things in the jungle that people can laugh at– more fun with the animals and the story, and maybe you get the skippers to play along, be more involved than just the narrator.’ So Marc came in, added a lot of the funny scenes with the gorillas and the safari and some of the other fun little scenes. Marc was so good at research and looking into the authenticity of things, but then layering humor on top of it. So we've added a lot of different things to it over the years. We want when guests come to the park, not to just see the same ride over and over again. It's always fun to have the discovery of something new. This time we took advantage of the same stories that were there, the same threads, the same scenes, and enhanced them with some new things.” 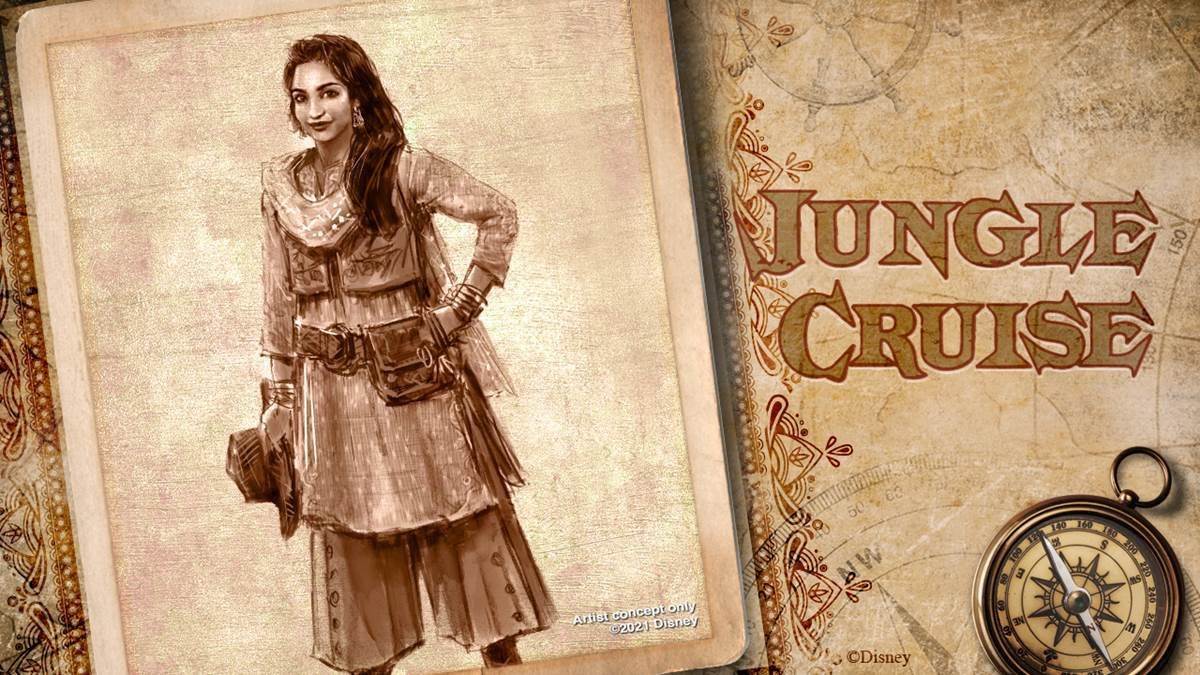 At this point Walt Disney Imagineering Creative Director Susana Tubert joined the talk by saying, “When we began to explore our creative approach to refreshing the Jungle Cruise, we gave ourselves a couple of guiding principles. The first one was how important it was to sustain the lighthearted comedic tone of the attraction. We wanted to make sure that we stayed true to that humor. Then the second one was looking for opportunities to find ways to bring an inclusive brushstroke across the attraction, but one that would feel relevant and also authentic and organic to the Jungle Cruise. In exploring the first aspect of our guiding principles, it really paid off. At the heart of the attraction is still the humorous banter of the skippers. However, we found ways to increase that by putting the characters and our guests in these unexpected scenarios that they have to overcome.”

“And then what's fun is by the end of the ride, the guests and the skippers realize that the reality is it’s the animals who get the last laugh. That's a twist to our ride story in our attraction. The second part of it was ‘How do we bring in this idea of diversity and inclusivity so that we can reflect not only our guests, but also our Cast Members today?’ To that point, we realized that Dr. Albert Falls has a granddaughter named Alberta who could become the new proprietor of the Jungle Navigation Company. You may not know this about Alberta, but her mom is a renowned artist from India and her father is a British scholar. So Alberta has this benefit that she's traveled all over the world. She's very cultural, she's very worldly, and she's made a lot of friends during her travels. In fact, these friends who are a little bit interesting and eccentric have come to visit her today and to have this immersive experience as explorers in nature.” 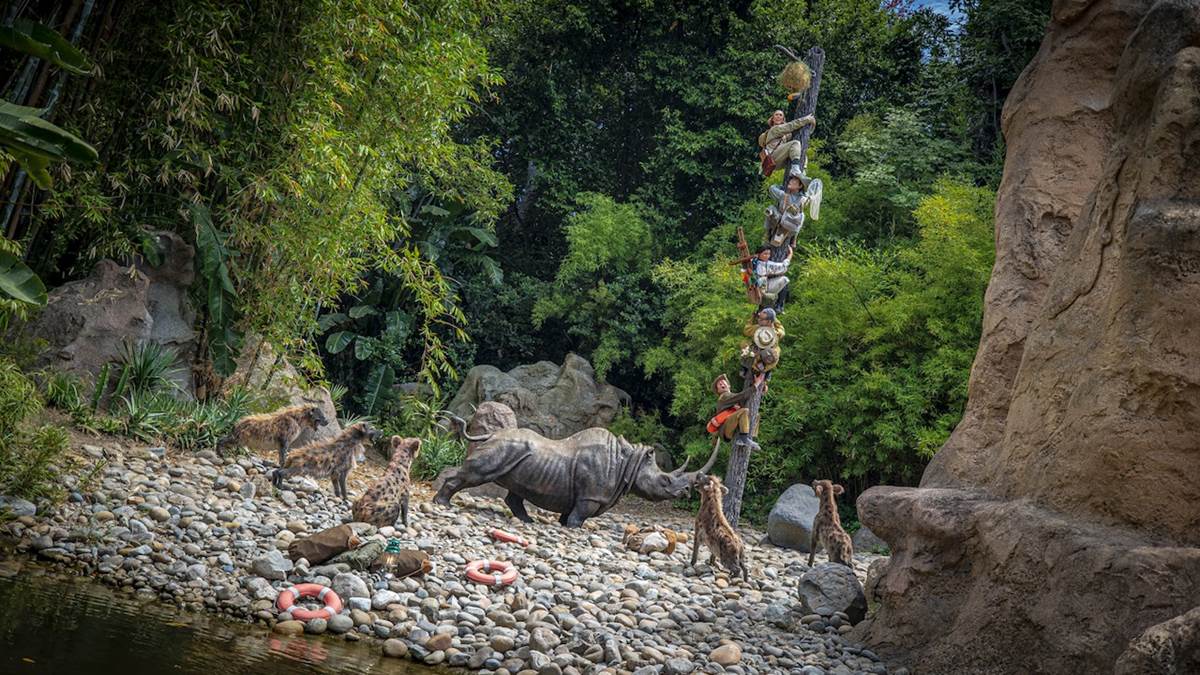 “There's Rosa Soto Dominguez, who is a renowned artist from Mexico, and she's Alberta's really good friend. Then we have Dr. Leonard Moss, he's a botanist from Nova Scotia. Dr. Kon Chunosuke from Japan is an etymologist and also a member of the Society of Explorers and Adventurers. And lastly is Alberta's cousin Siobhan “Puffin” Murphy. She's like twice removed, but she's really been wanting to have this experience in the Jungle Cruise. She's a birdwatcher and she's a little bit ditzy, but she loves birds. That's her fascination. By embracing Alberta's passion to keep the legacy of her grandfather alive, and through the visit of these amazing explorers who have come from all over the world, we found a really organic and natural way to bring this point of view to the attraction that would feel truly organic.”

Irvine picked up where Tubert left off: “Marc put in the safari going up the pole, but they were people we really didn't relate to. Now we know who these people are, because through the queue there are little Easter Eggs for each one of these characters that help you understand what their background is. Entomologist, biologists, the birdwatcher, et cetera. So when you come to that pole, you see that there is that hopeless safari that somehow has been kicked out of their boat, being trapped by the rhino, and each one of them is so carefully costumed. Susana and our costuming teams researched costumes and little props that visually help you understand the story of each one of them. They definitely come across with different personalities, too, which is super fun. But you wonder, ‘Why are they climbing up that pole? What has happened to their boat?’ So as you come around the corner, those hippos that have been threatening you with their wiggling ears have finally made purchase and been able to knock over a boat.”

“There is half of it floating there and half under water, and a lot of their belongings are floating through the water. ‘What happened to the rest of the boat?’ Around the corner, there it is, flipped around and lodged up against the shore and then taken over by the chimpanzees, and each one of them has gotten into the luggage and the packages on board and totally messed up all of their belongings. And then we've got the butterfly chimps, who have gotten into the entomologist’s bug collection and are having fun with them. Trader Sam still has his location at the end and he's just out right now collecting things that he's going to sell you in the lost and found. The navigation company has tried to put a place where if you've dropped your pack or glasses overboard, you can go and find them at the lost and found, but Sam has put on his gift shop sign and is now going to sell them back to you. While he was out looking for more lost and found items, those little spider monkeys have taken over his shop and are wreaking havoc on the Victrola and all the things that Sam has collected from past safaris along the way. Then we've still got Ellie giving you her final goodbye.” 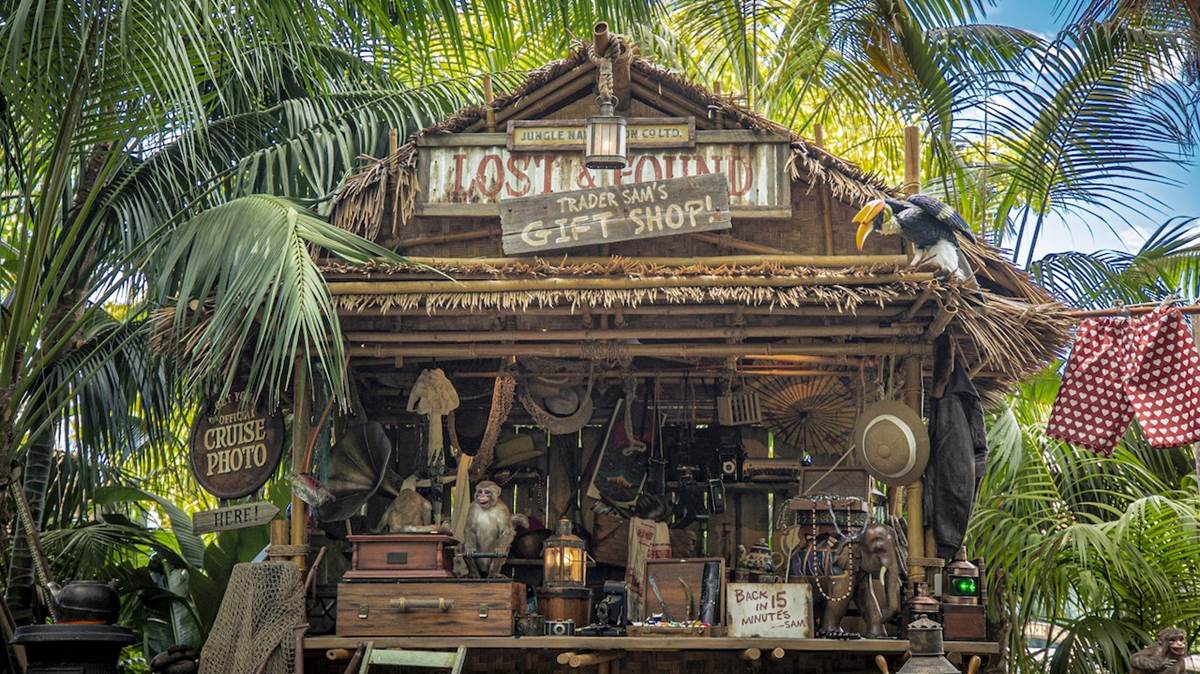 At the end of the presentation, media in attendance were given the opportunity to ask questions of Irvine and Tubert. Here are some of the more interesting tidbits to come out of this Q&A session:

Jungle Cruise is open to guests at Disneyland in Anaheim, California and Walt Disney World’s Magic Kingdom in Florida.