Disney Junior’s newest animated series Mickey Mouse Funhouse launches this August and Just Play is ready with a line of great Mickey and Minnie Mouse toys for preschoolers. We got an early look at their fall line of toys, which also includes a sixth wave of Disney Doorables, plus non-Disney toys like Shimmercorns, Blue’s Clues, and Ryan’s World. Here’s a look at a few highlights. This Funny the Funhouse playset features lights and sounds and comes with figures of Mickey Mouse and Donald Duck (additional figures sold separately). The figures can ride down the slides in their coaster pods and other interactive elements include a picture changing Funny Board, mystery door reveals, and a spinning sofa. Suitable for ages 3+, suggested retail price $49.99. 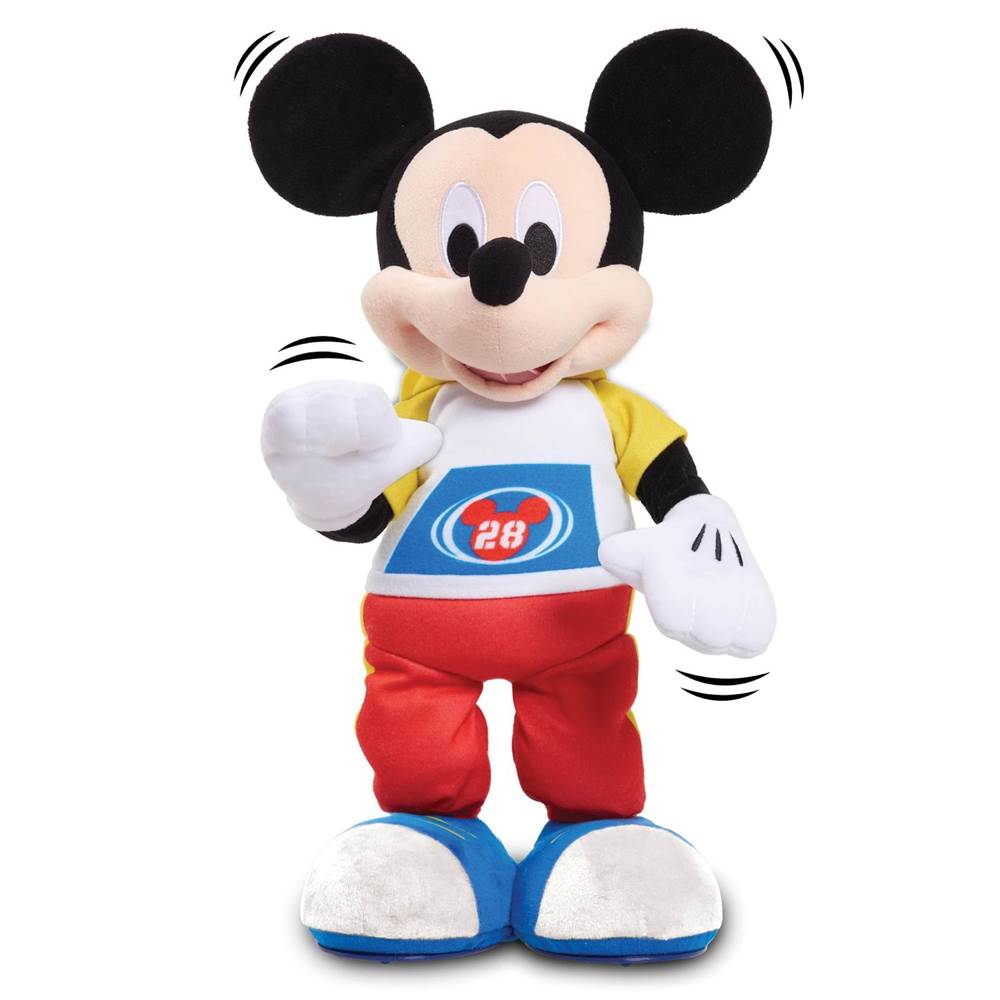 Get ready to stretch with this animated 16-inch plush dressed in his Funhouse outfit. His sweatshirt lights up and Mickey sings and dances while teaching kids the “Stretch Break” song. Kids will want to dance and sing along. Ages 3+, suggested retail price $39.99. 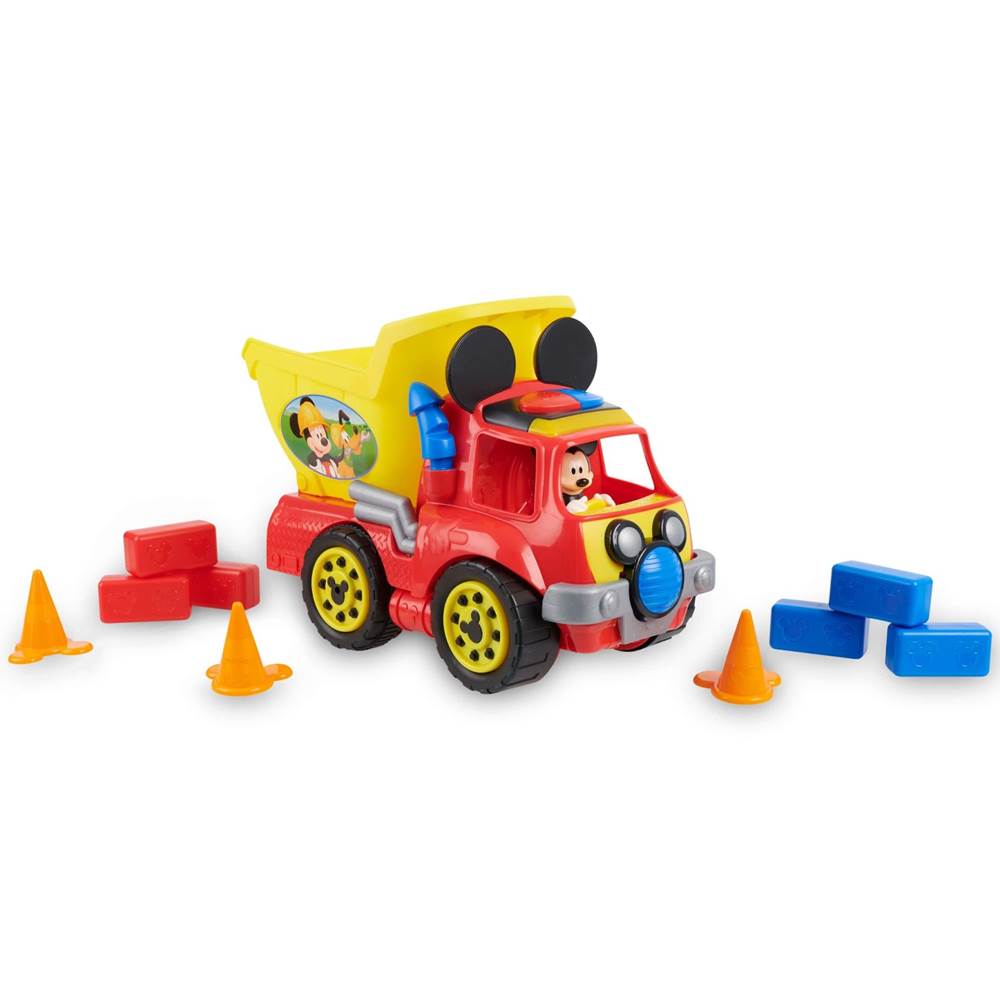 This motorized dump truck toy with lights and sounds comes with some incredible stunts, which kids activate by pressing buttons on top of the truck. It can go forward and backward, plus spin and do wheelies. It also reacts when it bumps into objects and comes with bricks and cones so kids can set up obstacle courses and empty the truck bed. Ages 3+, suggested retail price $49.99. Minnie Mouse and Panda are ready for a fun day of roller-skating with this animated musical plush duo. Stand them next to each other to watch them skate side-by-side, connect both hands to watch them spin, or put one in front of the other to create a conga line. Minnie Mouse is wearing a rainbow outfit and both she and Panda have sparkly helmets with Minnie’s signature bows. Plays the song “Minnie’s Roller-Skating Dreams.” Ages 3+, suggested retail price $39.99. 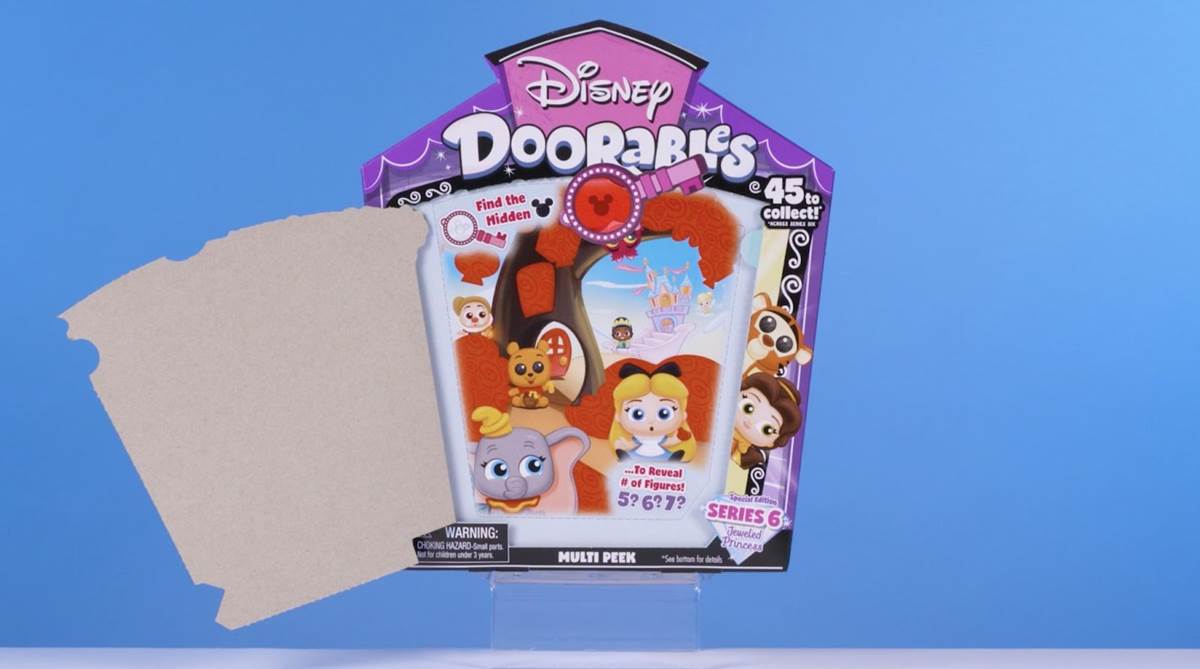 Disney Doorables are back for series 6 and a new feature is the Discover Magic Key, which reveals Hidden Mickeys on each door, which correspond to the number of figures hidden behind each one. There are over 45 characters in this release, including Special Edition Disney Princess figures in jeweled dresses. Figures include characters from Raya and the Last Dragon, The Little Mermaid, Alice in Wonderland, Peter Pan, Snow White and the Seven Dwarfs, Pinocchio, Dumbo, Winnie the Pooh, and Mickey Mouse and Friends. Ages 5+, suggested retail price $10.99. Click here to shop current Disney Doorables releases. It’s a toy and an art project all in one! Each Shimmercorn figure comes with stencils, a brush and markers so kids can decorate and customize their wings. A star-shaped brush makes it easy to style their long flowy hair every time kids change the look of their wings. Each set includes a Shimmercorn, a wing stencil, two pairs of wings to

Blue is ready for a check-up and kids are the doctor! This 13-inch plush interacts with kids as they follow the directions to care for the adorable puppy. Josh’s voice helps guide kids through the check-up and the plush reacts with lights to show them where to use the tools. Check Blue’s ears and temperature, listen to her heart, and apply bandages to her boo boos. The complete set includes a Blue plush, stethoscope, thermometer, play spoonful of medicine, otoscope, removable bandage, and removable mask. Ages 3+, suggested retail price $34.99. This Blue’s Clues & You play kitchen comes with a Handy Dandy Recipe Notebook, pan, spatula, spoon, Mr. Salt and Mrs. Pepper shakers, Tickety Tock, plate, cup, pizza tray, and 12 play food accessories. This interactive playset teaches kids how to use their kitchen, starting with washing their hands. Kids follow the clues in the recipe book to create tasty play meals, with realistic cooking sounds and phrases. All of the accessories can be stored in the oven and refrigerator compartments. Some assembly required. Ages 3+, suggested retail price $59.97, only at WalMart. This 22-inch tall rocketship playset is full of infinite possibilities with lights, sounds, and four levels of hidden surprises. Some of the fun surprises kids can reveal include a space blaster with lights and sounds, buildable rover, hammer,

moon dig, five figures and accessories, glow in the dark stars, and a Ryan astronaut badge! Ages 3+, suggested retail price $79.97, only at WalMart. 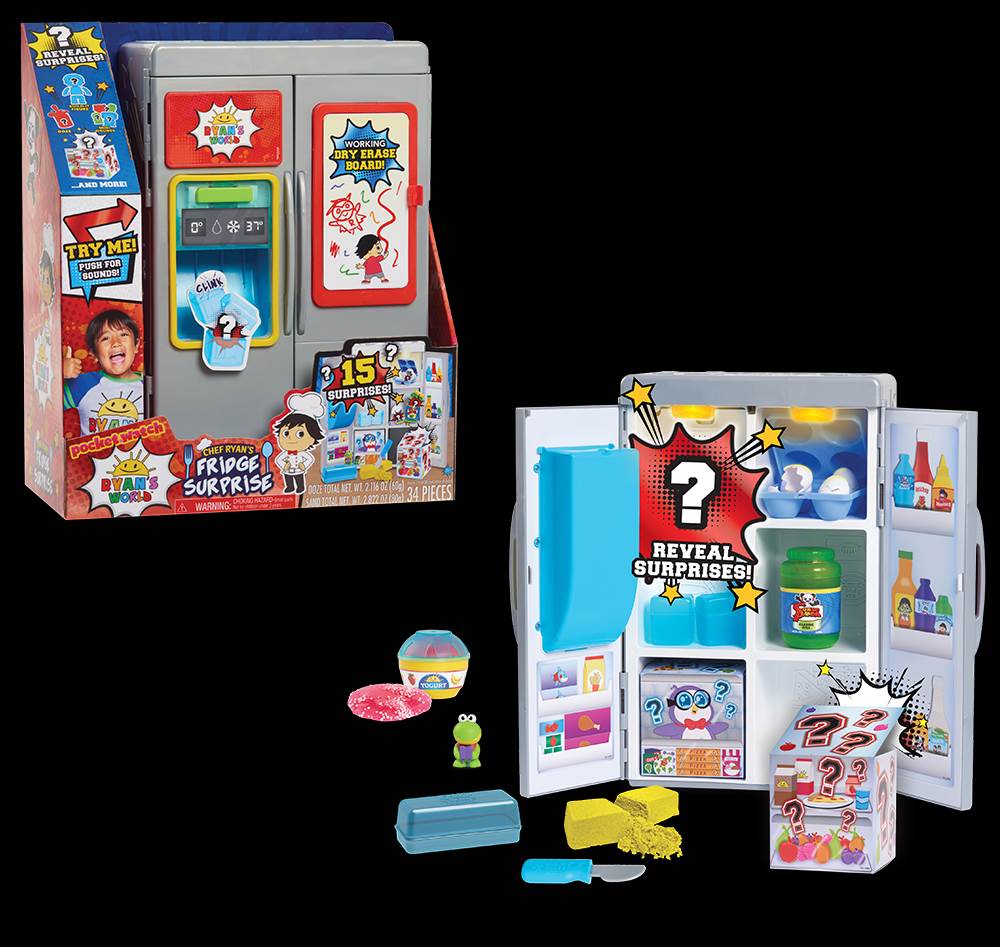 This 16-inch tall toy fridge contains 15 surprises, including mini figs, oozes and compounds, and a build-it Ryan fig. Lights, sounds, a working ice cube dispenser, and a working dry-erase board keep the fun going long after kids have finished finding and building all of the hidden treasures. A pack of stickers allow kids to decorate their fridge to make it one of a kind. Ages 3+, suggested retail price $49.99.

Be on the lookout for all of these amazing toys and more from Just Play, coming this Fall.

Click here to visit the Just Play store on Amazon.com.