The Mysterious Benedict Society panel at [email protected] began with a trailer for the show before diving into the complexities of filming in a pandemic and what the producers hoped to achieve with the series.

Holbrook started off the panel with praise for the show and how The Mysterious Benedict Society is family friendly but doesn’t speak down to kids. Phil Hay picked up on that discussion with how they wanted to create something different but sophisticated.

Tony Hale talked about how thrilled he was to have the challenge of playing twins. Hale also noted that the kids in the series are possessed with superpowers that are normal like creativity, intellect, and empathy. To Hale it was impossible not to see the parallels of the world in The Mysterious Benedict Society with real life.

The show is steeped in satirical and absurdist humor, but the joy the actors had on set was evident throughout the panel. Kristen Schaal talked about her experiences with the falcon named Blackjack and how she thought it was great to be the falcon wrangle. Meanwhile MaameYaa Boafo mentioned her fear of the falcon and how she wouldn’t be anywhere near the bird. 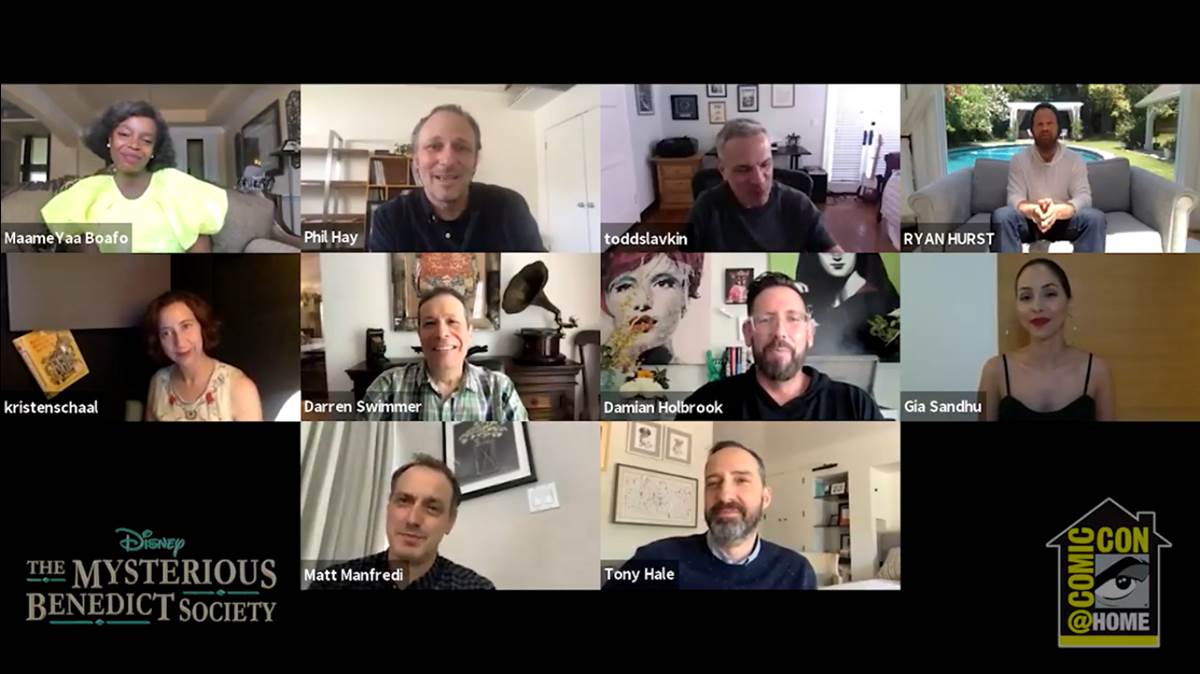 Ryan Hurst described how blessed he was to be part of something where the focus is empathy and truth. Working with the kids was a joy for the actor. For Gia Sandhu her character’s pivotal moment explaining how she tracked down Mr. Benedict required her weeks of advance practice to nail the monologue for the scene.

Holbrook talked about the uniqueness of the sets and costumes on the show. Phil Hay talked about how the book inspired the details of the set. This is a show of practical set design and not reliant on computer-generated effects. For Tony Hale, the environment and the set design inspired the actors in the creation of the characters.

Phil Hay described how the show design was reminiscent of a 1960’s European utopian vision. Hay also talked about how much support they received from author Trenton Lee Stewart. He encouraged the producers to go for it in the production, which includes some additions to the story Stewart created.

Matt Manfredi picked up on this note and described how the producers and show runners had such a love for the series that they didn’t approach how they would change what was in the books, but rather add to it. In the series we see added scenes with the adults when the kids are on the island.

As the panel wrapped up, Tony Hale took time to praise his younger costars. He talked about the talent and skill the kids brought to the set and described how impressed he was with them giving up five months of their lives, unable to return home (they had a parent with them on set). For half the day they would be in school, and then spend the other half of the day on set shooting all during a pandemic.

While laughs were had about all the impossible places that Ryan Hurst’s character Milligan gets stuck in, Hurst himself described Milligan as moderately indestructible. To Hurst, Milligan is much like Nana from Peter Pan.

The panel wrapped up with Damian Holbrook trying to get some clue about whether a second season would happen. Sadly, no confirmation or announcement was made. Viewers got a sneak peek at this week’s episode seven.

The first six episodes of The Mysterious Benedict Society is currently streaming on Disney+.