Eda reconnects with an old friend while she thinks her closest friends are ready to leave her in the latest episode of The Owl House. 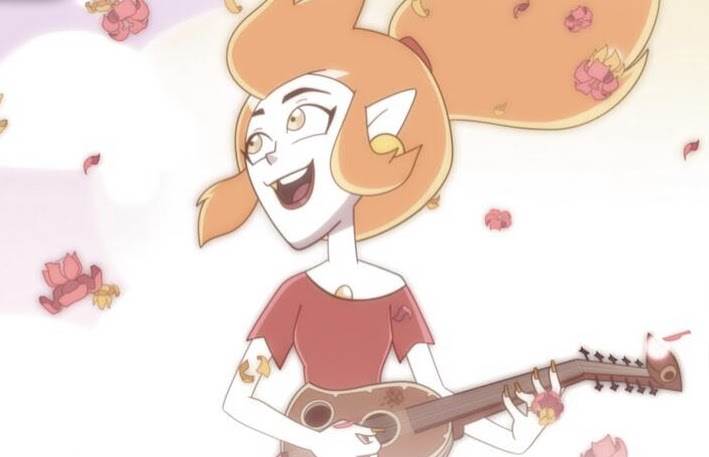 Eda is at home going over a shopping list realizing how much she’s changed for the better while watching Luz and King outside training for a big day. She’s also watching a live stream on Penstagram of a Raine Whispers accepting the position of head bard for Emperor Belos.

King also is talking about going back to his dad and hints that he might be leaving Eda to go find him. Luz is helping him win the Gland Prix so they can get King on camera to send a message to his dad wherever he might be. Eda thinks all of his attempts to talk to her will mean that he will say goodbye.

Knowing that Luz and King will inevitably leave her, Eda heads down to the local pub for some apple blood where she encounters a musical group (playing magical instruments like she did earlier in the episode) that saves the town from some of Emperor Belos’ guards. She helps the group escape and, clearly running from King who she thinks is trying to run from her, wants to join them. She also reveals that the leader of the group is her old friend, Raine Whispers, the new Bard Coven head in disguise. During a flashback we learn that they were close friends playing music, and Raine had learned of the Emperor's plans to force witches into covens and decided to conform and move through the ranks in efforts to learn more and secretly formed the Bards Against the Throne.

The group helps save wild witches from being caught by the Emperor and his guard, and now Eda is helping them. After stopping a raid, Raine and Eda play music together back at their hideout and Raine sees the effect this now powerless witch has on everything she touches, almost spreading her curse through music.

Eda joins Luz and King at the Gland Prix, and sits with other parents who are pointing out which kids are theirs when Rain calls saying they got a tip about another raid. She goes to help them, but as they arrive they realize it's a trap set by the head of the Abomination coven. Raine and Eda get away, and Raine tells Eda that Belos is planning some kind of major spell for the upcoming day of unity but he needs every head witch to do it. So he comes up with a plan to use Eda’s curse and music to get rid of these two coven heads chasing them in a way to stop them.

The two begin to play music, enchanting the whole area before Eda begins to play, diminishing magic throughout the area and canceling spells created by the coven heads chasing them. As she is playing, Raine realizes this will affect them too when the picture of Luz and King she keeps in her hair falls out and Raine realizes she does have something to lose. As they are telling her to go back, the Abomination Coven head traps them, with Eda escaping and Raine telling her to leave them trapped.

Back at the Gland Prix, Luz and King come in 5th place, thanks in part to King’s weak stomach thanks to flying. Eda helps with their video plan, streaming the video instead of being on the local news. The video spreads, and we see many viewers watching it, including someone who may or may not be related to King. We also learn that what King was trying to tell her the whole time was that he wanted to legally change his name to King Clawthorne since Eda was the one that raised him.

The video spreads, and even the Abomination coven head is subjected to it while tormenting Raine, who gets away but it stopped by one of the Blight’s abomination soldiers piloted by Kikimora. They are trapped and told he won’t be petrified, as he is needed alive and well for the Day of Unity, but is put to sleep until then. Once again, The Owl House has left us wondering what will be happening next.