I was 10-years-old when I played my first board game based on Disney’s Gargoyles, but it was quite a bit different than this brand-new one that was just released by Ravensburger, Gargoyles: Awakening. The game I played as a child came with a VHS copy of Gargoyles the Movie: The Heroes Awaken, but it was made of thin paper and you had to be in front of a TV because it required the VHS to be playing to experience it. Funnily enough, 25-years later, this new game is recommended for ages 10 and up. 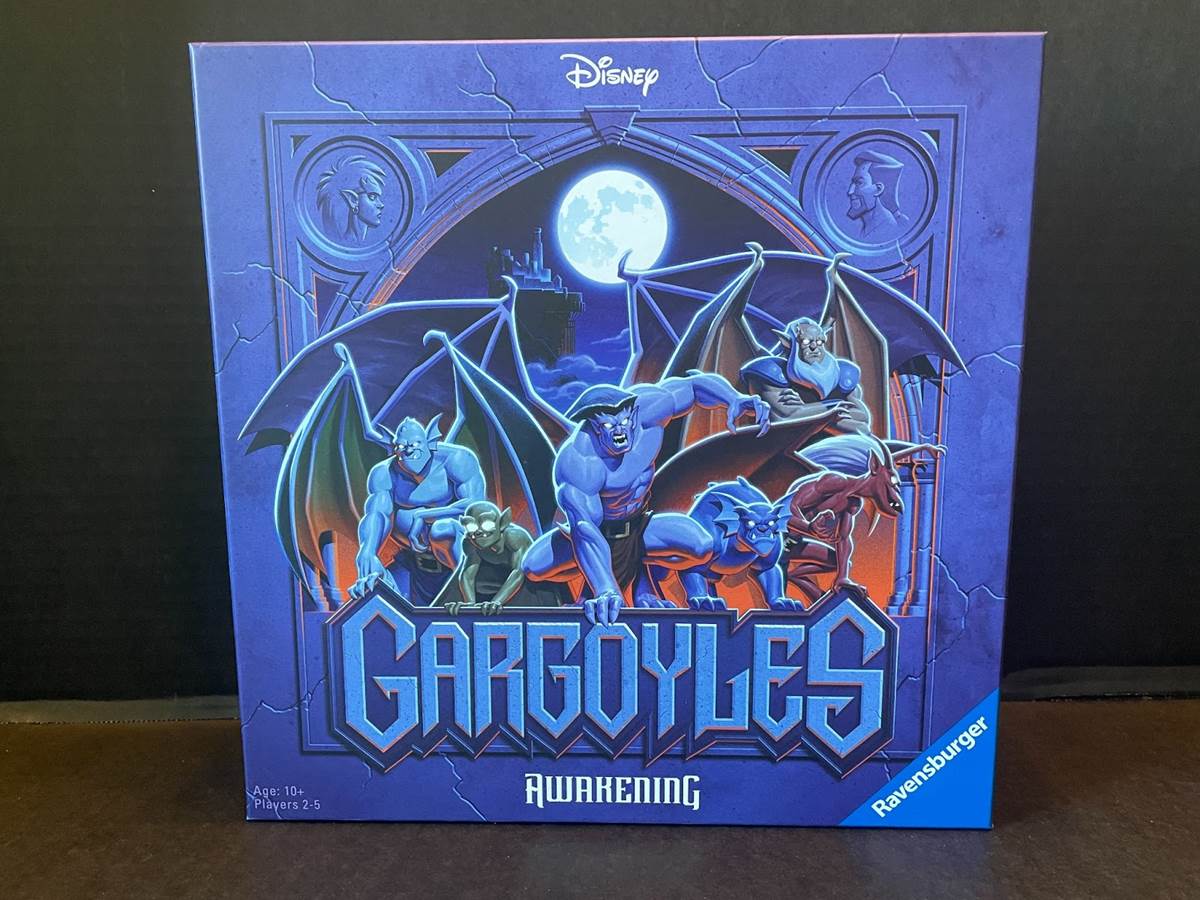 Inspired by the first season of the Disney Afternoon TV series, the packaging instantly welcomes back fans into 1990’s New York City. Some assembly is required, but when built, the board becomes New York City complete with the Eyrie Building and its rooftop castle. 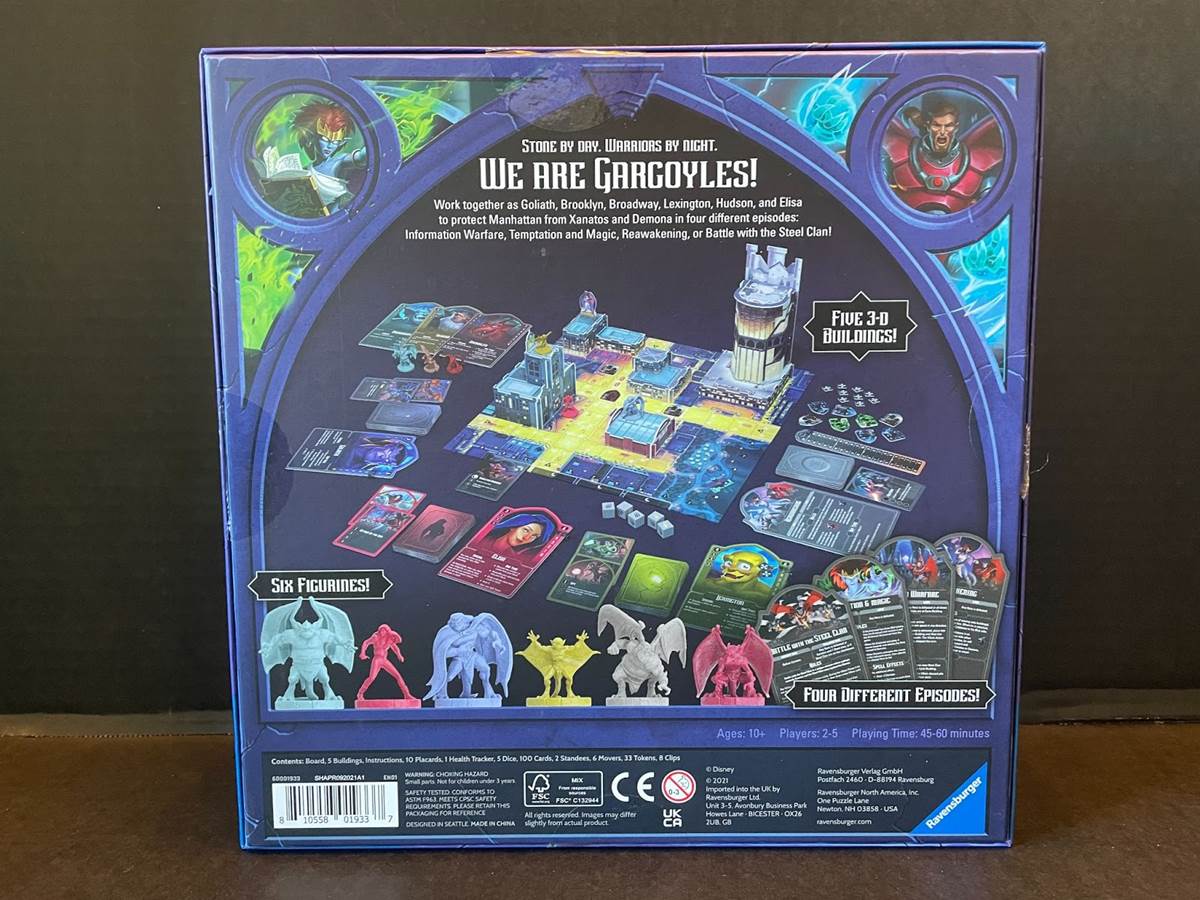 Playable by up to 5 players at a time, there are 5 heroes (Goliath, Brooklyn, Lexington, Broadway, Hudson and Elisa Maza) and two villains (Xanatos and Demona) and their minions. Each hero has their own deck of cards and a placard that is used to keep track of their health and special abilities. The basic premise of the game is simple: Traverse the board and work as a team to take down the villains or stop their evil plot. However, this is really 4 games in 1. Called “Episodes” and based on story arcs from the TV series, each one has a different objective and even a different setup. “Reawakening,” based on the season 1 finale, is recommend to start with because the premise is a little simpler. Once players have an easier understanding of how to play the game, they can move on to the more challenging scenarios. 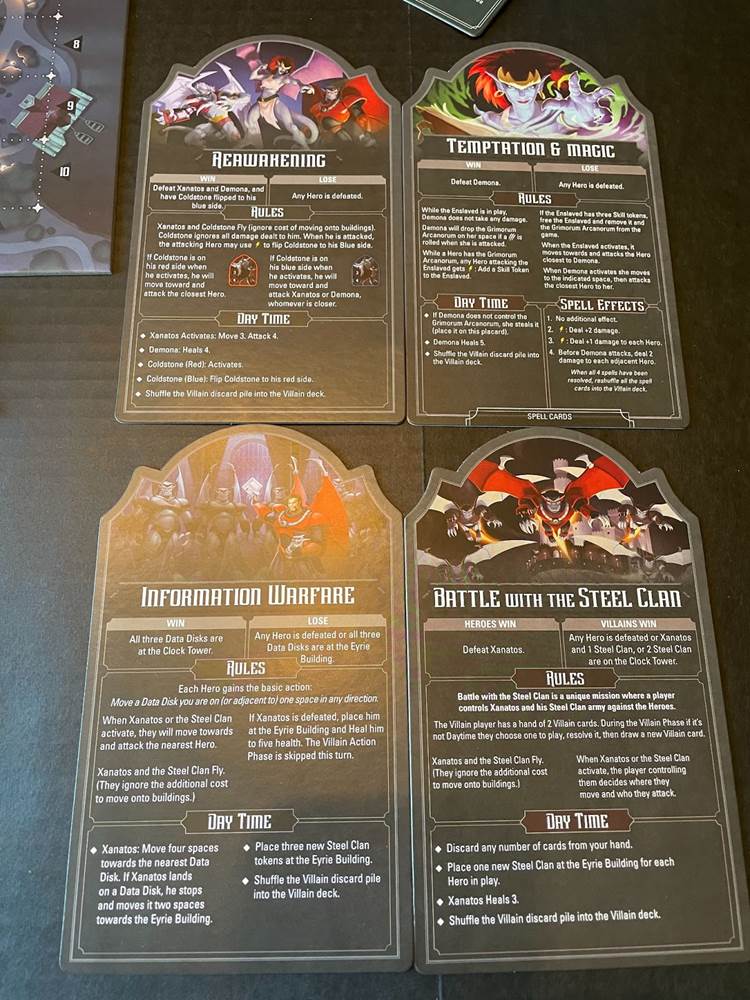 As with the TV series, the Gargoyles are active at night, but stone by day. The game starts with each hero taking a turn and performing the number of actions allowed on their placard, which also makes it easy to see how far they can move on a turn. When on top of buildings, heroes can also “Glide,” moving farther. Always holding no less than three cards in their hand, they can also use cards when the time is right. 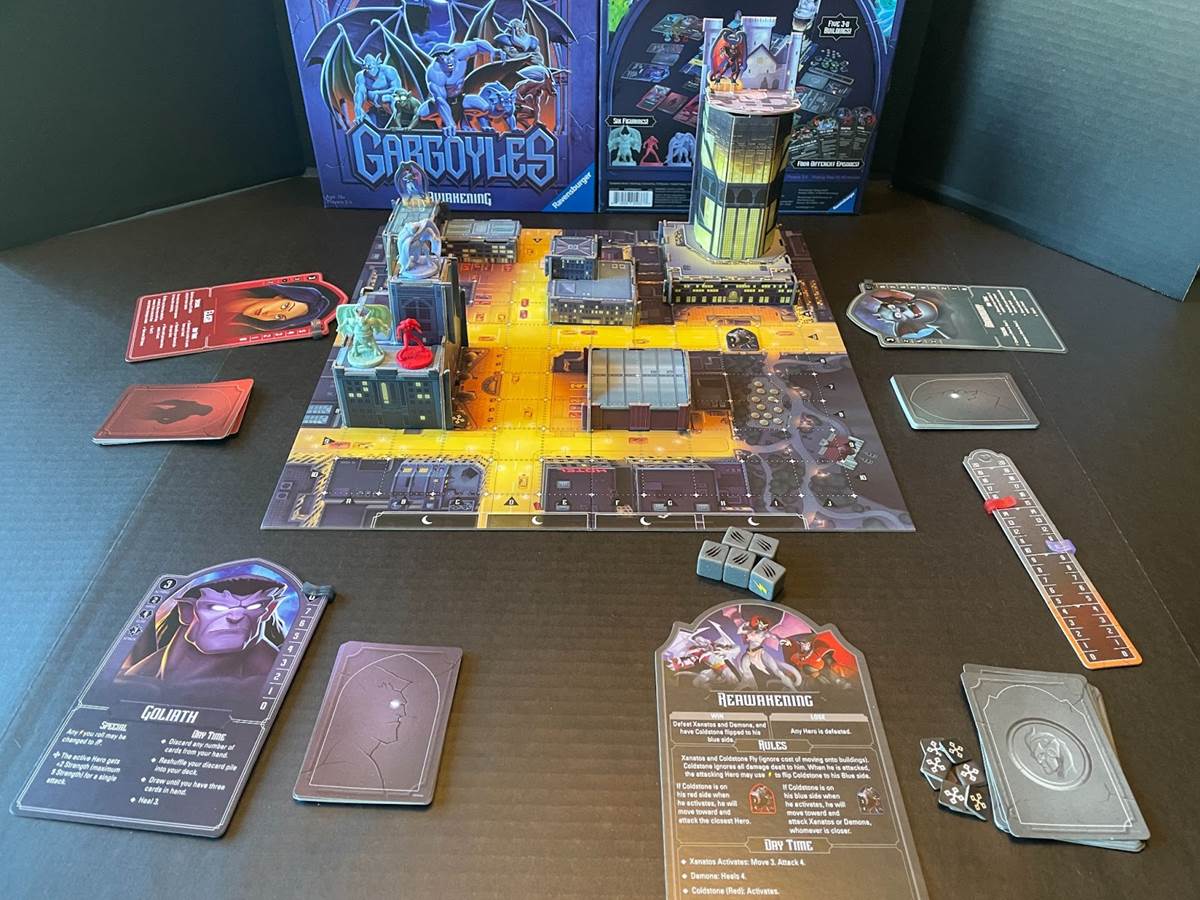 This is the kind of game where if one player wins, everyone wins, but if one player loses, the game is over. It’s advantageous for everyone to work as a team by either teaming up on a villain or dividing and conquering. 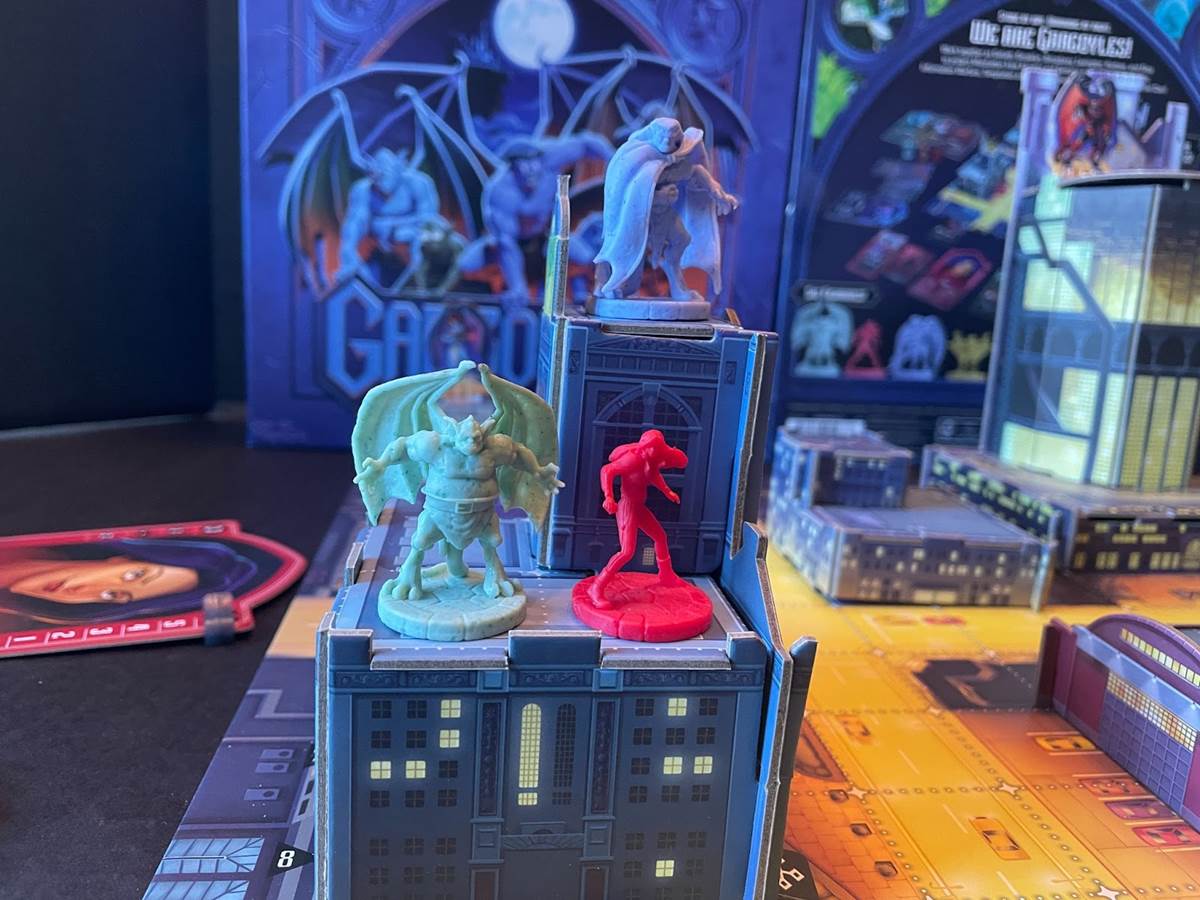 The harder episodes also introduce special items, like the Eye of Odin and the Grimorum Arcanorum. Part of the fun of the game is navigating through the board and climbing up and down buildings. 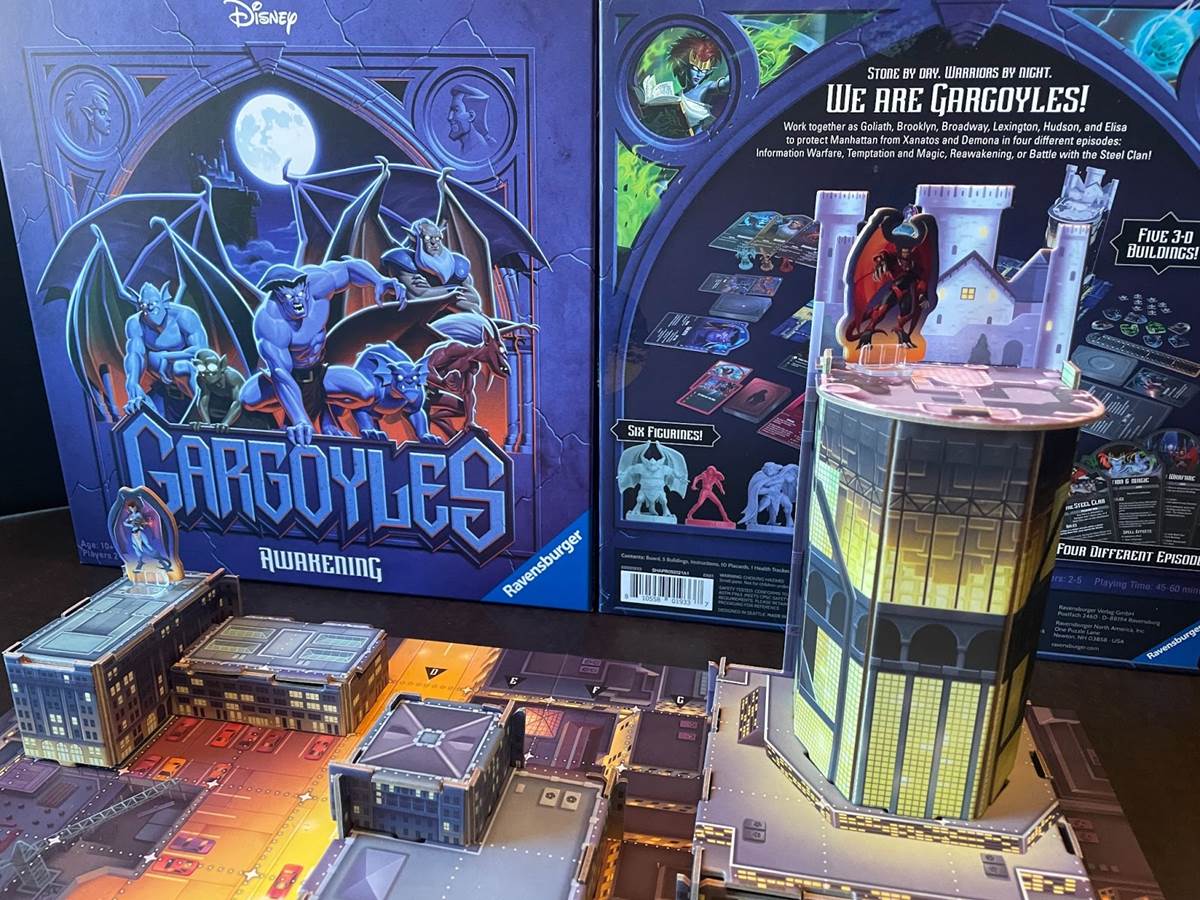 Each game lasts about 45-minutes to an hour and while the instructions sound tricky at first, playing through a few turns makes it easy to understand and get used to. 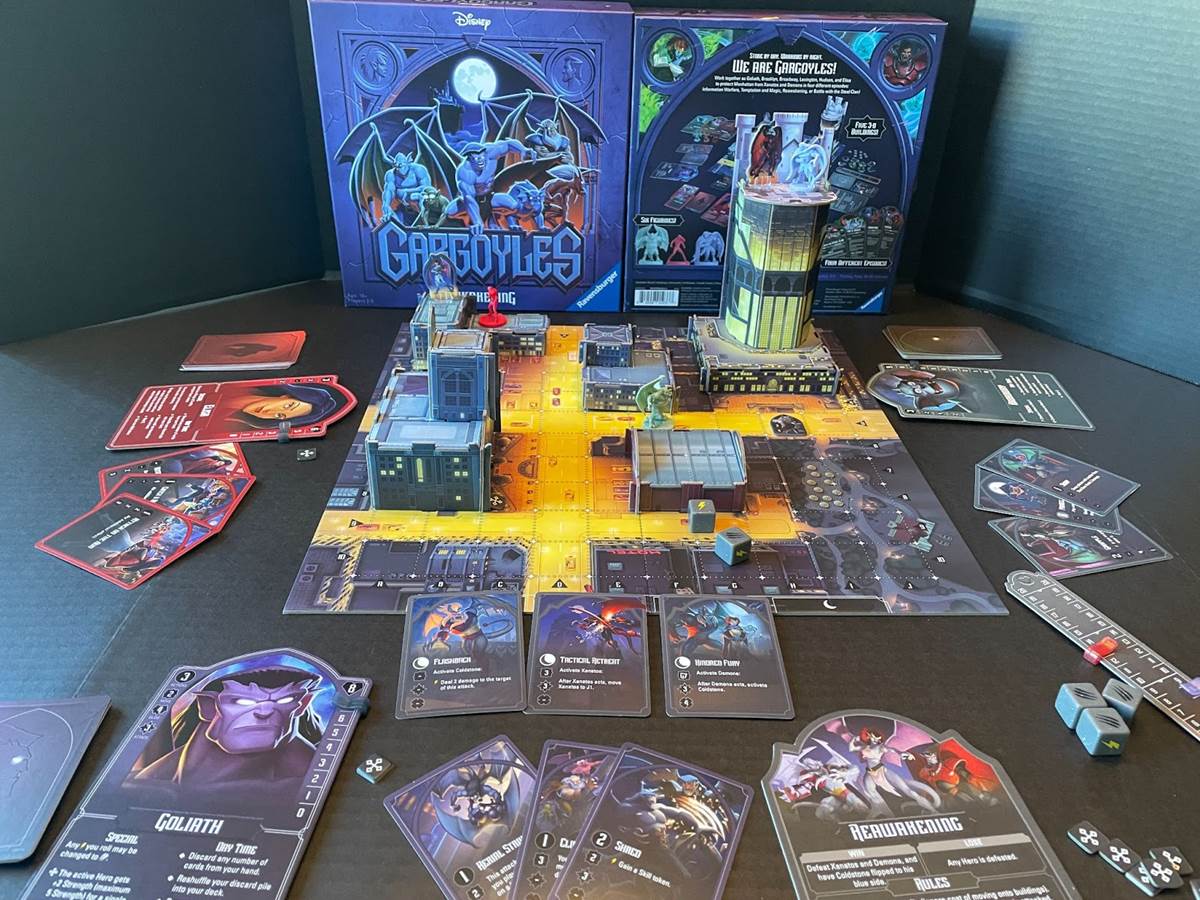 With Disney’s Gargoyles streaming on Disney+, parents who were fans of the show may find Gargoyles: Awakening to get their age-appropriate kids into the series in a fun and interactive way. But it’s also a lot of fun for the young at heart with fond memories of a TV series they grew up with. 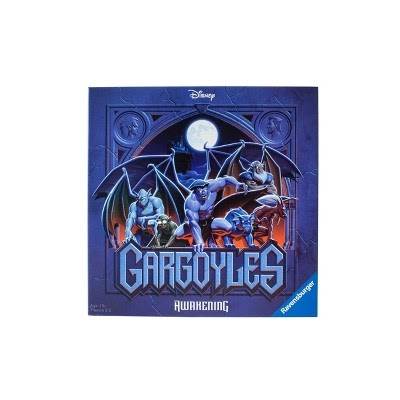