Back in Star Wars: War of the Bounty Hunters #2, the only interested party that hadn’t yet shown up to Crimson Dawn’s auction for the carbonite-frozen Han Solo was the bounty hunter pair of Beilert Valance and Dengar. And in today’s new tie-in issue Star Wars: Bounty Hunters #15, we get to see that duo’s efforts in making it to that gathering.

Though they both have different reasons for wanting to claim Solo for themselves (Valance is trying to help out his old Imperial Academy buddy who once saved his life, Dengar wants to use the bounty to rescue the woman he loves from the clutches of Jabba the Hutt), it’s been cool to see these two put their differences aside in an uneasy alliance to get the job done. 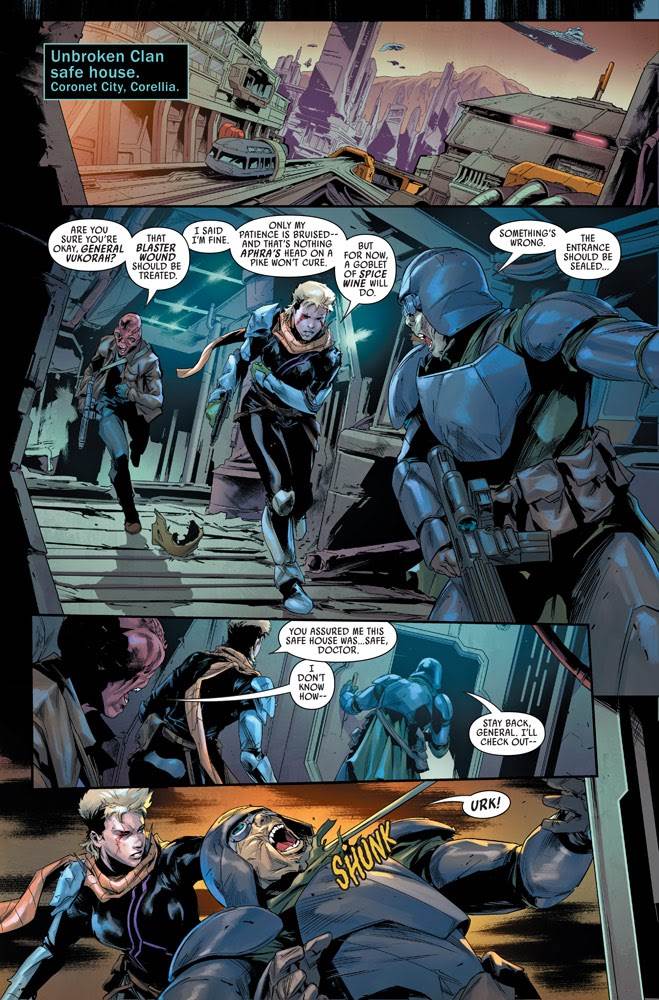 Regardless, Dengar and Beilert travel from the Smugglers’ Moon of Nar Shaddaa to the casino city of Canto Bight, where they cross over with characters from Star Wars: Doctor Aphra and attempt to discover where exactly the auction is being held, but not before having to go toe-to-toe again with the deadly Crimson Dawn assassin known as Deathstick. Meanwhile, we check in on the Unbroken Clan’s General Vukorah, who has returned to Corellia to find that same familiar purple-clad figure haunting her safe house. Then we see T’onga and Losha’s trip to Nar Kani to recruit a gladiator in their quest to track down and protect Cadeliah, the star-crossed heir to the Unbroken Clan and Mourner’s Wail Syndicate criminal organizations. They also swing by the Gand floating sanctuary, where Zuckuss is nursing his wounds– both physical and emotional– from his battle against 4-LOM as seen in today’s other War of the Bounty Hunters tie-in. It all seems to be building to something big, but I suspect we won’t know what for another couple months. 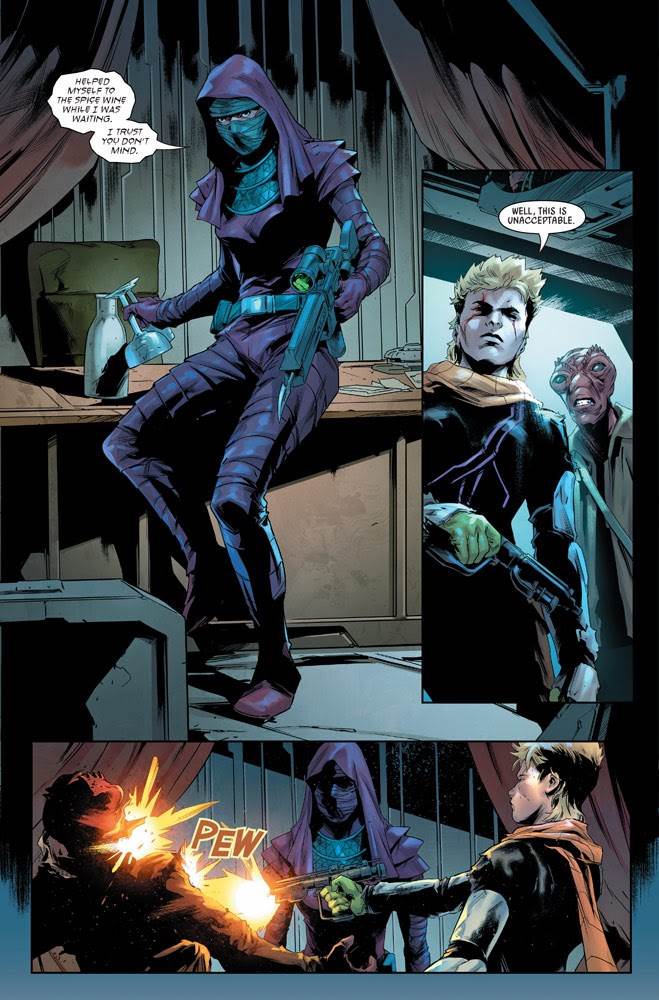 I think this was a nicely fast-paced issue of Bounty Hunters, and I appreciated all the planet-hopping as writer Ethan Sacks switched gears between the varying protagonists. I also enjoyed the “putting a crew together” aspect of T’onga and Losha’s mission, really liked the connection to the 4-LOM & Zuckuss one-shot, and I was amused to see another use of “Dank Farrik” pop up again in the current Star Wars comics. I do think the rivalry between Valance, Dengar and Deathstick is getting just a little repetitive, but I’m also curious to know what exactly went down between the latter two while Beilert was rushing back to the fight after crashing through the casino ceiling. It does seem like these characters will finally get to the fireworks factory of the Crimson Dawn auction in the next round of storytelling, so I’ll be looking forward to their inevitable confrontation with Boba Fett, as depicted on September’s cover.