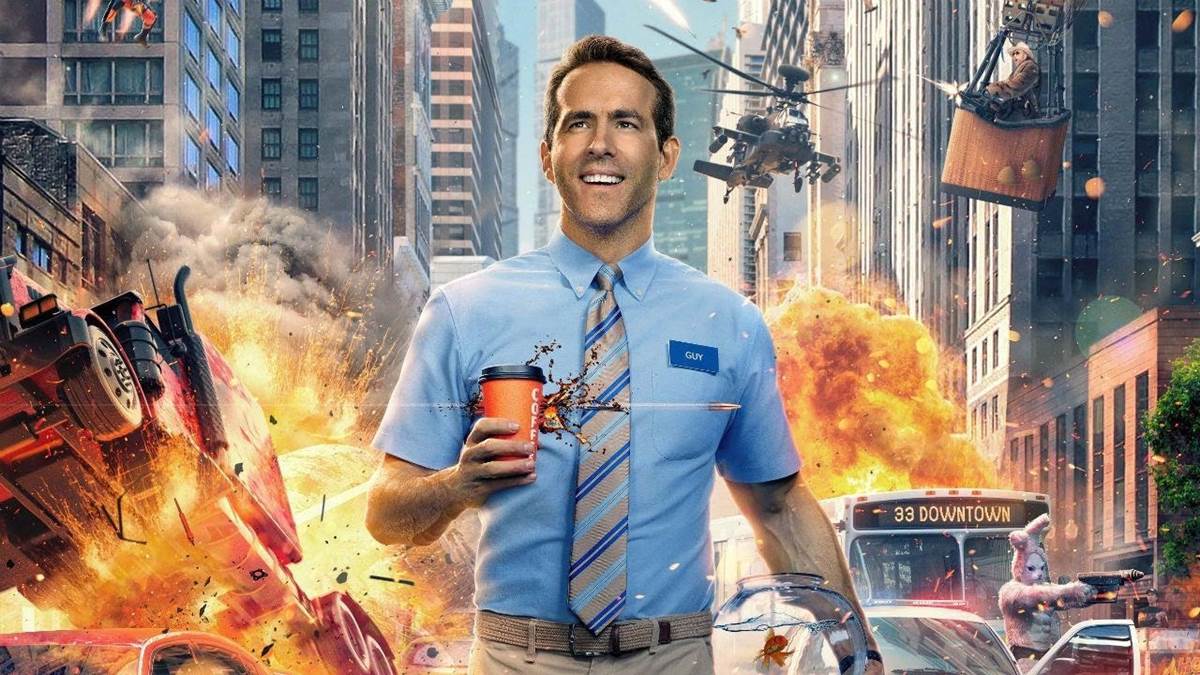 Have you ever felt like your life is an endless loop of repetitive, menial tasks– getting up in the morning, getting dressed, drinking coffee, enduring your workday, then going to bed and doing it all over again? Well so does Guy, the guileless protagonist of the new Ryan Reynolds-starring comedy/action film Free Guy (which was in development at Fox before Disney bought the company’s entertainment arm and renamed it 20th Century Studios). Except in Guy’s case, he happens to be right.

As depicted in the movie’s many trailers and TV spots– so I don’t feel like it’s too much of a spoiler to come out and say right at the top here– Guy is very quickly revealed to be a non-player character (AKA an NPC) in a Grand Theft Auto-style massively multiplayer online video game called Free City, where pretty much anything can and does happen on a daily basis. He works as a teller at a bank that gets robbed multiple times every few hours, and as he walks down the street explosions go off, cars crash into each other, and shopkeepers fly through plate glass windows without passersby even batting an eye (this part I felt to be a little inauthentic, as I’ve found in my gaming experience that NPCs are at least programmed to respond to extreme scenarios, even if they’re something they experience fairly consistently). 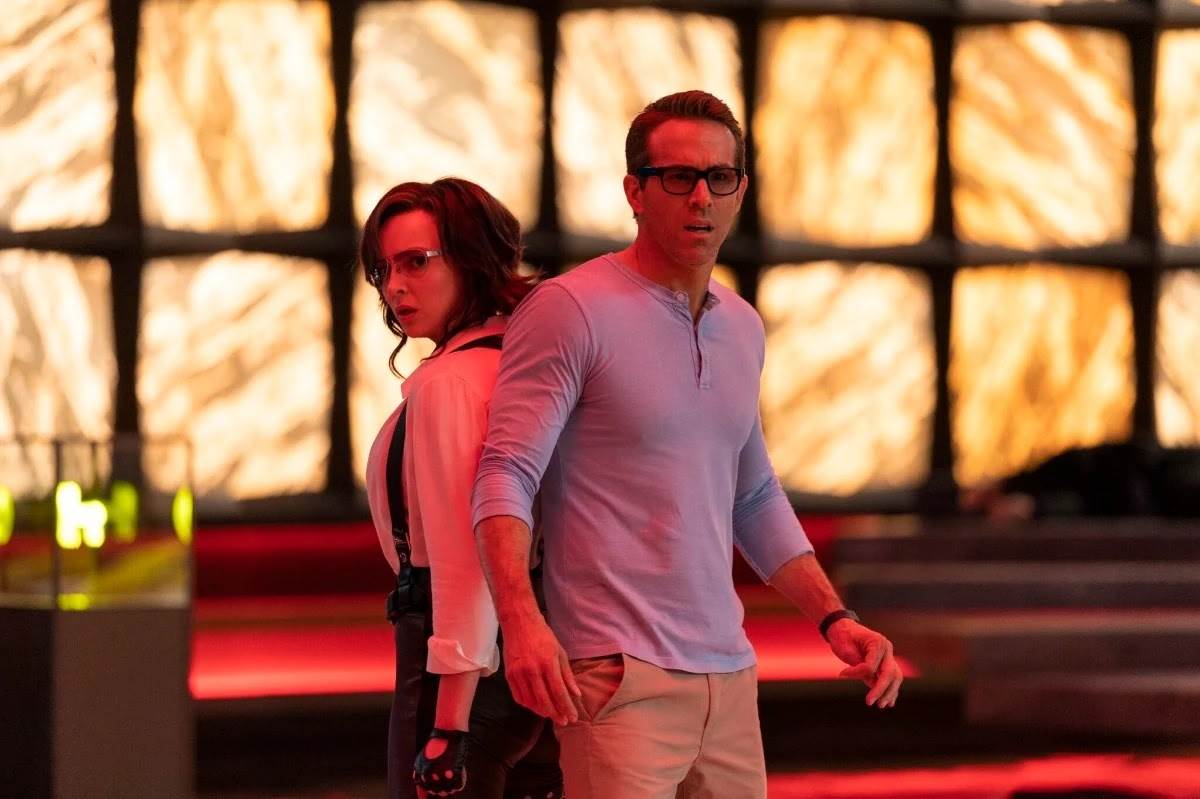 Guy’s existence is turned upside-down when he encounters the woman of his fantasies– a badass hacker type with the handle Molotov Girl played by Killing Eve’s Jodie Comer, who has ulterior motives for wanting to go off the game’s established map, as it were– though she inadvertently causes Guy to deviate from his preprogrammed routine along the way. In the movie’s “real world,” Molotov Girl is a programmer named Millie whose ex-creative partner Keys (Joe Keery, best known as Steve from Stranger Things) works for the company behind Free City and its irascible founder Antoine (the multitalented Taika Waititi, playing against his ordinarily meek New Zealander type). I won’t spoil too much of these three humans’ tempestuous history and why they’re at each other’s throats throughout most of the film, but suffice it to say that back in the video game Guy feels the need to level himself up by mastering dozens of laws-of-nature-breaking skills in order to impress his newfound dream girl. Eventually the pair team up to take on the virtual world and complete Millie’s secretive mission, but not before discovering the significance behind Guy’s burgeoning sentience. 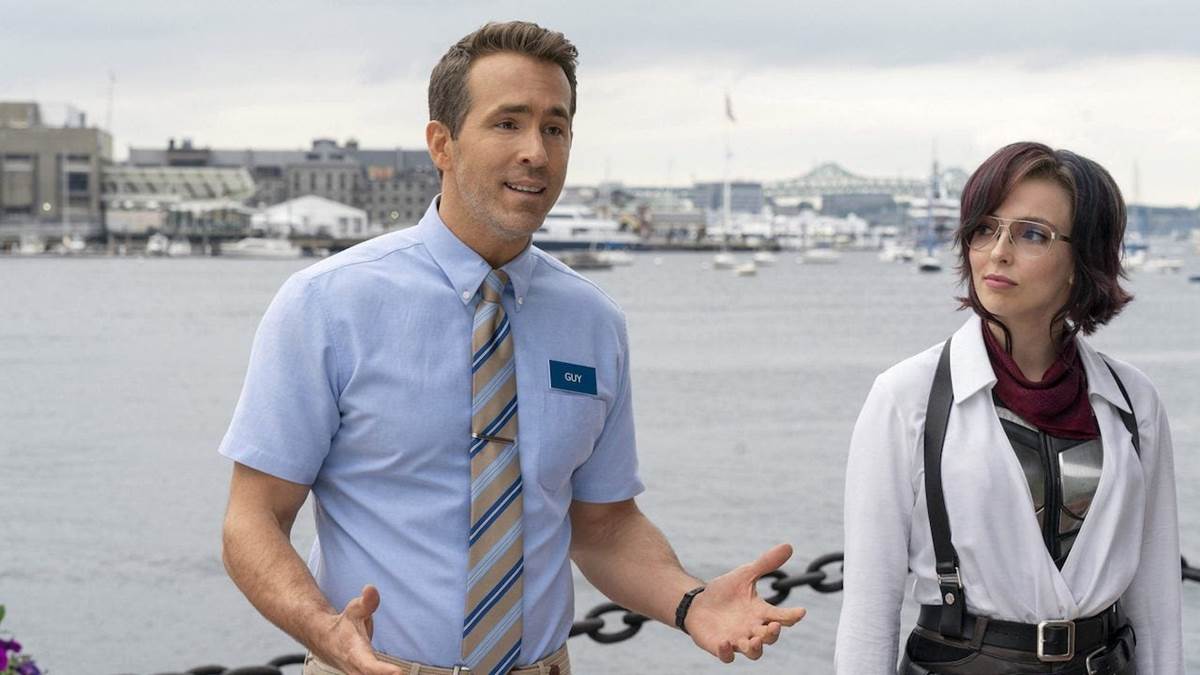 There’s a recurring theme in this movie positing that it’s always better to make something new than another warmed-over sequel, but despite that admirable notion, Free Guy doesn’t quite come across as being wholly original. Anyone who’s seen the existentialist 1998 Jim Carrey comedy The Truman Show is going to find a lot of familiarity here, but there are also sprinkles of Groundhog Day and even The LEGO Movie thrown in for good measure. Still, despite it being a tech-savvy remix of other recognizable ideas (I can think of a number of great movies that were cobbled together in the same way), Free Guy manages to be entertaining and clever enough on its own merits to coast by in a rapid-fire succession of impressively rendered effects-heavy action and intermittently laugh-out-loud one-liners interwoven through an often genuinely heartfelt emotional core. Reynolds does a sufficient job of differentiating his sweetly naive performance as Guy from the smart-mouthed mercenary Wade Wilson in the Deadpool franchise, and the supporting cast (additionally populated by  the charming Lil Rey Howery from Get Out and Mulan’s Utkarsh Ambudkar as Antoine’s boot-licking underling) fleshes out the film’s landscape with likeable characters. There are even a few surprising cameo appearances that will have audiences clapping with recognition, not to mention some last-minute borrowing of Disney-owned intellectual property that could be considered hypocritical treading on established IP. 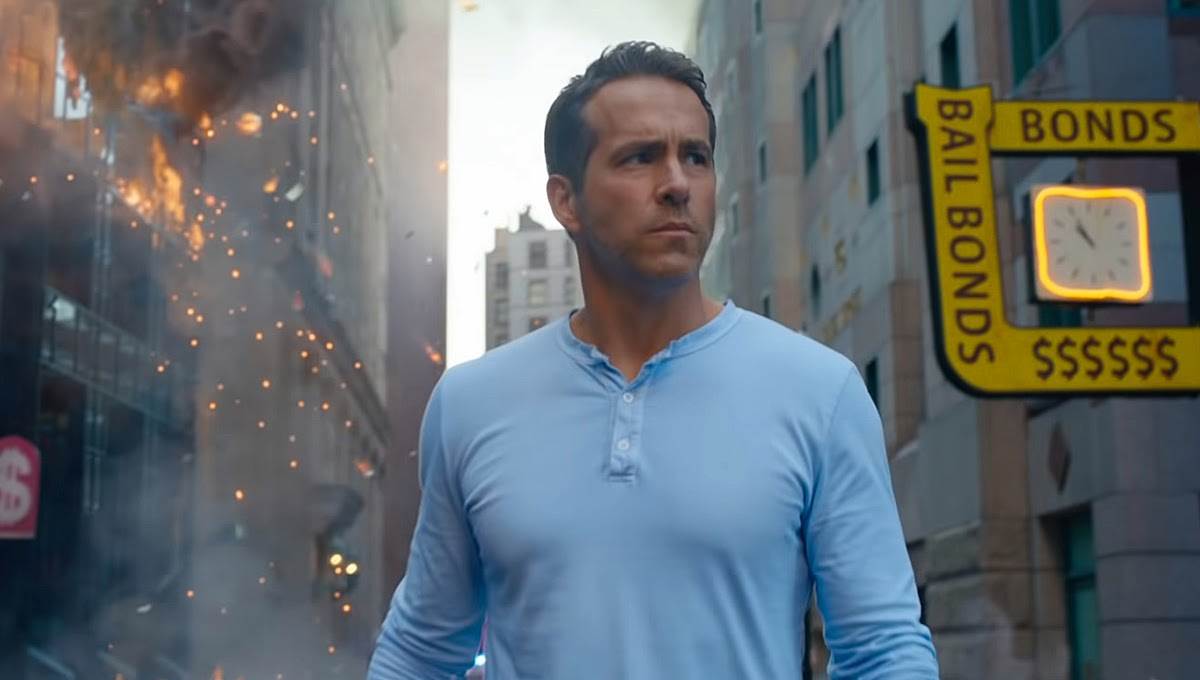 Speaking of rules, I think people with intimate knowledge regarding the video game industry are going to have some occasional nitpicks concerning the mechanics of how Free City actually works as a game in-universe, but the movie’s narrative is breezy and tongue-in-cheek in a way that the logistics of that don’t really matter in the long run. The bottom line is that Free Guy by and large accomplishes what it sets out to do– throw a popular comedic actor into a chaotic but good-natured story about self-discovery, crafted competently by Night at the Museum director Shawn Levy. It’s a mostly winning combination that makes skillful use of its capable cast and inventive behind-the-scenes talent, though the recipe may seem somewhat reminiscent.