Catherine and Peter return on Friday, November 19th in the second season of The Great on Hulu. The cast and creative team recently wrapped filming on the show’s sophomore season, reuniting at the Television Critics Association (TCA) Summer Press Tour to talk about what fans of the series can expect from the new batch of episodes. 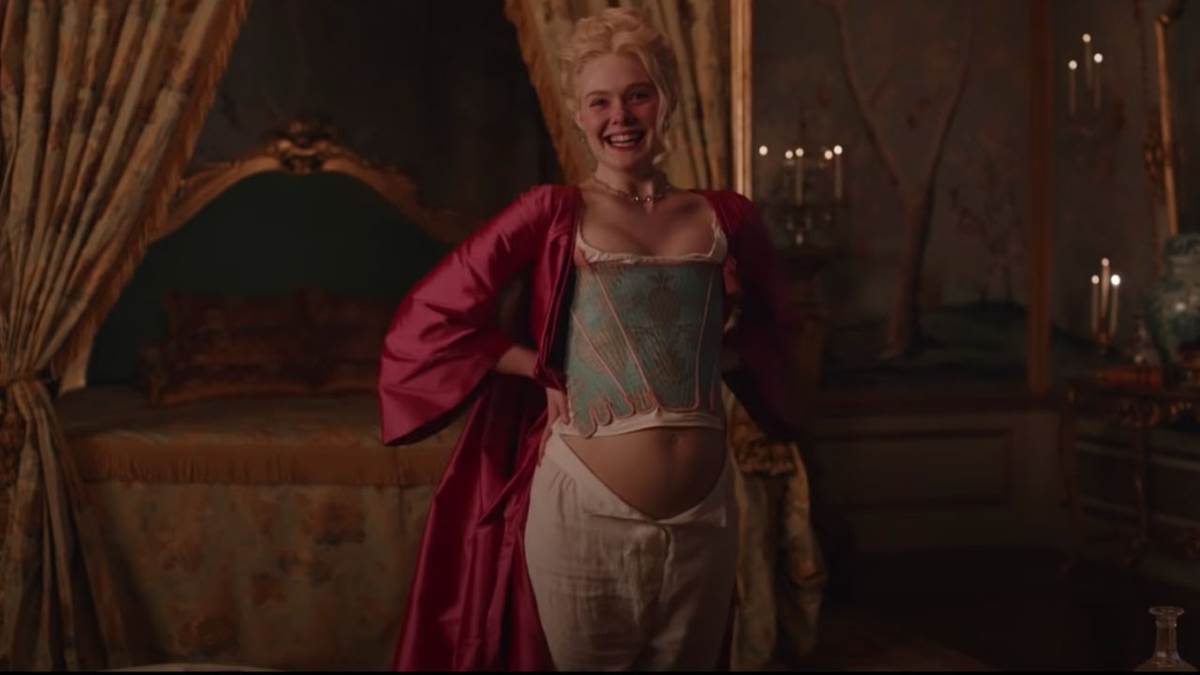 “I’m pregnant for a lot of the series, so we would have different stages of the [baby] bump,” star Elle Fanning shared about her character Catherine, who is now with child. “It was interesting working with our costume team and making the dresses that would work and show the bump in a certain way.” Several stages of pregnancy are depicted in the series, with various prosthetic baby bumps for the actress to wear. “It’s such a big part of the season. The season has a very parental theme running through it, so having Catherine grappling with the fact that she is going to become a mother soon, but then the baby is also kind of her protection because she knows… while Paul [Peter’s name for the yet-to-be-born child] is in there, she’s safe and Peter’s not going to kill her.”

Nicholas Hoult doesn’t wear a baby bump, but he nonetheless enjoyed the costumes he got to wear as Peter. “What Sharon [Long] designed were really fun costumes, my favorite being what Peter has designed for the baby shower that he throws.” Dressed in pastel shades of pink, blue and yellow, Nicholas shared that it’s something that fans should look forward to seeing.

“It’s sort of like last year, there's things that are true, but not told the way they happened,” series creator and executive producer Tony McNamara explained about the liberties the sitcom continues to take with historical facts. “We're always conscious of a few things that are true and a few elements of her life that we want to touch on, even if we don’t tell it as literally as the history was, I suppose.”

“There's a lot of what comes out of the characters themselves and how that ties into the themes of both the second season and the first,” executive producer Marian Macgowan added. “It probably is a little bit of a combination of the three things together if you think about it. It’s a bit of history, a bit of what's fun to do, and a bit of the characters themselves and the stories.”

One thing is guaranteed for season two, it’s so hilarious that the cast had a hard time getting through the scenes. “The amazing thing about the cast is everyone’s so surprising in their delivery,” Elle Fanning shared. “You can read the script and it’s laugh-out-loud funny when you’re reading the words, but then you get to know each character so deeply and each person understands who they are on a deeper level now as well.  So everyone’s taking a little bit more risks.  I felt like season two, we were really going for it and embarrassing ourselves and saying lines, just trying things which then inevitably is just funny. Sometimes it works and sometimes it doesn't, so we're always trying to just see what sticks and that's what's so great about the set and the environment that we create on the set. It’s very warm and loving and no judgment.”

As for whether or not there’s a long-term plan for the series, Tony McNamara is taking it one season at a time. “I’m sort of focused season-to-season,” he explained. “It’s easier than thinking about a big, whole picture. But I sometimes think we’ve got such great characters and situations, you could always keep finding new elements… We just wrapped this one, so we’re thinking about the next one. That’s all really.”

You can see Elle Fanning and Nicholas Hoult in season 2 of The Great starting November 19th, only on Hulu.