The latest episode of The Owl House takes us for a day back in the human world, but that doesn’t mean it will be without any magic! 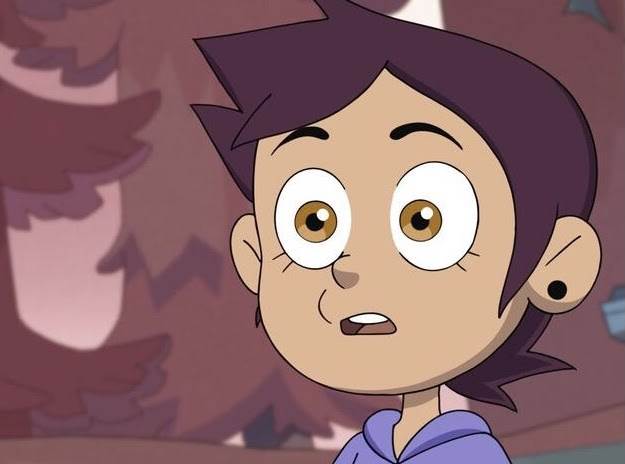 From the outset, this episode requires a bit of knowledge from the regular viewer. A casual viewer would still enjoy it but have a number of “wait… what?!” Moments and new viewers would be those friends just asking questions the whole time. “Who is this? What is that? What is that thing?”

Immediately we see the Human Realm with “Luz” and her mother as she is cleaning her room, throwing most everything away. Again, we know this is not Luz but some kind of impersonator we learned about last season and earlier this season. As she is cleaning, she closes a glass door and the real Luz is trapped in the reflection screaming “you!”

Wait, so now Luz knew about her doppelgänger already? What!?

It was an easy day for Wendie Malick and Alex Hirsch at the recording studio, as Eda and King/Hooty have a combined 6 lines this episode and they were all said in the opening of this episode as Luz is in the Boiling Isles and has seemingly successfully built her own portal door to make a return to the Human Realm. As she goes in she realizes it’s not quite what she remembers and ends up in an endless void of cubes. Don’t worry though, she is tied to a rope and at any moment Eda and the others can pull her out and back to the Boiling Isles.

As she screams Eda’s name, a cube appears and glows, prompting her to grab it and Luz is suddenly whisked into the reflection from glass on the Owl House, and is able to see Eda outside holding the rope. Luz then gets the idea to say her mother’s name and can now view her in the Human Realm even if she can’t quite get there herself. What she discovers alarms her though, as she discovers another version of her with her mother. Oh! So this was just before that cold open, got it!

At a certain point bouncing from one reflective surface to another, Luz learns that the other Luz can hear her and then we see the same thing we saw earlier, but now see the full discussion and we get to learn all about Luz’s doppelganger after a brief chase and getting caught in an abandoned house nearby. I know most of us thought this might have been some agent of Emperor Belos in some way but no, not even close. We learn that faux Luz is a basilisk named “Number 5” (or “V”) who was actually running from Belos and his guards because they were being hunted. When she was in the market and saw the human with the Owl Lady, she went through the open portal to make an escape and was able to hide out as Luz. Learning that V just needed a place to belong, Luz realizes they can help each other until she comes back that way her mom isn’t worried about her. But, as she panicked and part of her real self was revealed, V says she needs magic to be able to transform. Something rare in the human world.

While on the hunt for magic, we get subtle clues to the history of the town, with some hints of Philip Wittebane (the other human who made it into the Demon Realm).

Finding some teens who V mysteriously knew from summer camp (did she go to camp as Luz?) they explain their Hex cards and give V a scarily accurate reading before sending her to a nearby Historical Society to buy her own pack of the magical cards.

The historical society is oddly the most enticing part of the episode because it’s full of little nods to the larger story at play. The curator goes to retrieve a pack of the cards for V to buy and while she looks around, stumbles into an office where she learns that he is the one setting the traps around town to catch magical creatures after a chance meeting with the Owl Beast. V herself gets trapped in the office, and the Curator comes back knowing exactly what she is, but fun twist, he’s a crazed conspiracy theorist who’s out more for internet videos than much anything else.

Luz, who saw the whole thing, knows V is in trouble and she has to do something so again finds her mother, and realizes she must tell her everything.

Again, for the regular viewer, we know what she is saying to her mom. But for the casual or first time viewer, this whole little bit is literally just a transitional bit. We never see her tell her Mom anything. We see Mom pull up to the Historical Society but she thinks this is all an elaborate story, at other points even suggesting its LARPing or even a highly themed escape game. It’s not until she gets into the curator’s office and sees V trapped that she starts to process everything Luz said was real.

The curator starts Monologuing and explains a little bit about the history of Gravesfield, saying that two brothers were lured into a realm by a real witch. This portion of the episode is easily the most revealing and I could have used about 22 more minutes of this. He shows off a page in his book while explaining this (and yes, my nerd self had to freeze frame this) and you can see two figures, one of which looks like the Echo Mouse’s replays of Philip Wittebane, holding a staff and a paper glyph similar to Luz’s, and the other figure with a cardinal on his shoulder, very similar to the palisman that has attached himself to Hunter, the Golden Guard, who fans are theorizing is a demon realm clone of the Emperor or at least someone. We learned more about Hunter in a recent episode and it’s all starting to come together. The Curator goes on to explain that the brothers were never seen again.

More of this! I want more of THIS! But alas, we need to save V, and that’s exactly what Luz’s mom is able to do. Though, I wouldn’t be surprised if this isn’t the last we’ve seen of the Curator. As he now knows where the live demon is going and who she is with.

Back at home, Luz is able to reflect in the car headlights in the rain and say goodbye to her new friend and her mother. Luz’s mom is very scared about what’s going on now that she has processed everything, but Luz promises she will make a working portal and will be able to return. Proud of her daughter, Luz’s mom says the she has matured and Luz slips and says that staying in the Demon Realm was the best decision she ever made. Of course, it is now revealed that she CHOSE to stay there, and Luz’s mother gets upset that she did something wrong that pushed her away. As Luz is explaing that that’s not what was going on, Luz is getting pulled back and away from her Mother, promising to return. Eda and the others had pulled her out because her portal was closing. They all were excited to have her back, but Luz clearly isn’t happy with the way she left things with her mom.