Disney Channel recently debuted their 110th Disney Channel Original Movie, or “DCOM,” if you’re hip. With Spin capturing the hearts of millions of kids and families, plus two more films on the way before we close out 2021, Disney Branded Television had a virtual celebration of the legacy of DCOMs on Zoom (zoom zoom!) at the TCA Summer Press Tour. Being old enough to have been in the target age group when the first DCOM premiered (Under Wraps), it was a little mind-blowing to think about the fact that over 100 films later, it’s ready for a remake. 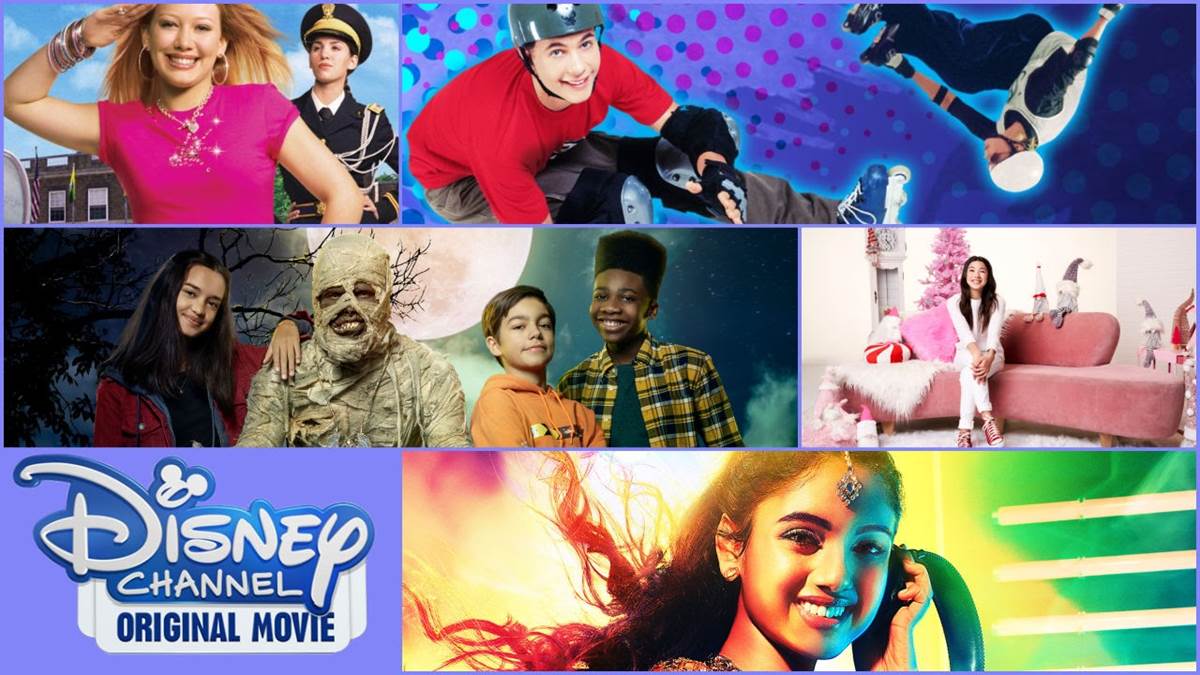 “I’m just super excited for kids to see Under Wraps and the story is about a group of three friends who discover a 4,000-year-old mummy,” Christian J. Simon revealed, recognizable from his work as Leo on Sydney to the Max. “They must find a way to return him into his coffin before midnight on Halloween.” While the essential plot is the same from 1997, Disney Channel has thrown in some fresh, new updates in the 2021 reimagining.

“When I was younger, me and my sister used to always love watching Disney, so this was a big thing for me, too,” explained Scarlett Estevez, who transitioned from adult-focused TV shows to kid-friendly ones a few years ago on Bunk’d. She stars in the upcoming holiday film, Christmas Again. “My whole family is Latina and Latino and they celebrate their culture in [the movie] by serving dishes, and we even sing a song in Spanish in the movie, too.”

With Christmas Again featuring a Cuban-American family, this upcoming DCOM carries over the culturally-specific identity that Disney Channel is bringing to a lot of their new and upcoming projects, including Spin. “I hope that viewers take away that Indian culture is very nuanced, and I think traditionally our portrayal of South Asian communities has been quite stereotypical, unfortunately,” Avantika said, who plays the lead character Rhea in the film. “There’s so much diversity across the country that it’s important to portray, anytime we’re portraying a South Asian family, we should portray it as nuanced, because I don’t think it’s possible to fit such a diverse, such a colorful country into one portrayal.” She added that in the film, Rhea’s parents are from different parts of India (North and South), allowing viewers in India and who celebrate Indian culture in their homes to resonate more deeply with those aspects of the film. “I think that effort and being so open to that kind of collaboration is a really big stride that Disney is making, and I’m super proud of the fact that we were able to portray that in the film.

Being that the oldest DCOM is about to celebrate its 24th anniversary, the stars of the first wave of DCOMs are now old enough to be parents, both in real life and on film. “[My children] are 4 1⁄2 and 2 1 / 2,” Christy Carlson Romano shared, legendary amongst Disney Channel fans from the early 2000’s for her work on Even Stevens, the DCOM Cadet Kelly, and as the voice of Kim Possible. “Our Disney+ avatar is Kim Possible,” she joked, explaining that what her kids are age-appropriate for at this time are merchandise that she has collected from her work with Disney Television Animation. “It’s a matter of whether it’s going to keep their attention and stuff.” All I can say is those kids are in for a treat when they’re ready to watch their mom boss Hilary Duff around.

“I've got a two-year-old and a six-month-old, so it's hard to capture their attention for extended time periods,” Brink star Erik Von Detten said, who also voiced Sid in Pixar’s Toy Story and played Anne Hathaway’s crush/Mandy Moore’s boyfriend Josh in The Princess Diaries. “They haven't had the opportunity really to watch Brink, but I did have my rollerblades out the other day and my two-year-old daughter did take an interest to those. She actually managed to get them on and everything. So I think she's going to be a solid Brink fan.” Sounds like a plot idea for a sequel if I’ve ever heard one.

With two DCOM legends joining the virtual party, both of whom are now parents, it seems like a no brainer that both should return to Disney Channel someday as parents, teachers, or any kind of adult figure in a future DCOM. “Christy and I did have the opportunity to work together on the live action Kim Possible movie,” Senior Vice President of original movies for Disney Branded Television Lauren Kisilevsky said when I asked about the possibility of that kind of future casting decisions. “We'll see where we get with our upcoming DCOMs. I love the idea of parent casting.”

Whether you’ve been watching DCOMs all your life or have kids who are just getting into them, you can celebrate the legacy of Disney Channel Original Movies this year with Spin, Under Wraps (2021), and Christmas Again. All three films are Disney Channel exclusives, but will also eventually make their way to Disney+, home of the entire DCOM library of films.