The stars and creators of Marvel’s Shang-Chi and the Legend of the Ten Rings came together today for a press conference to discuss what went into making this incredible new film, character inspirations and more. 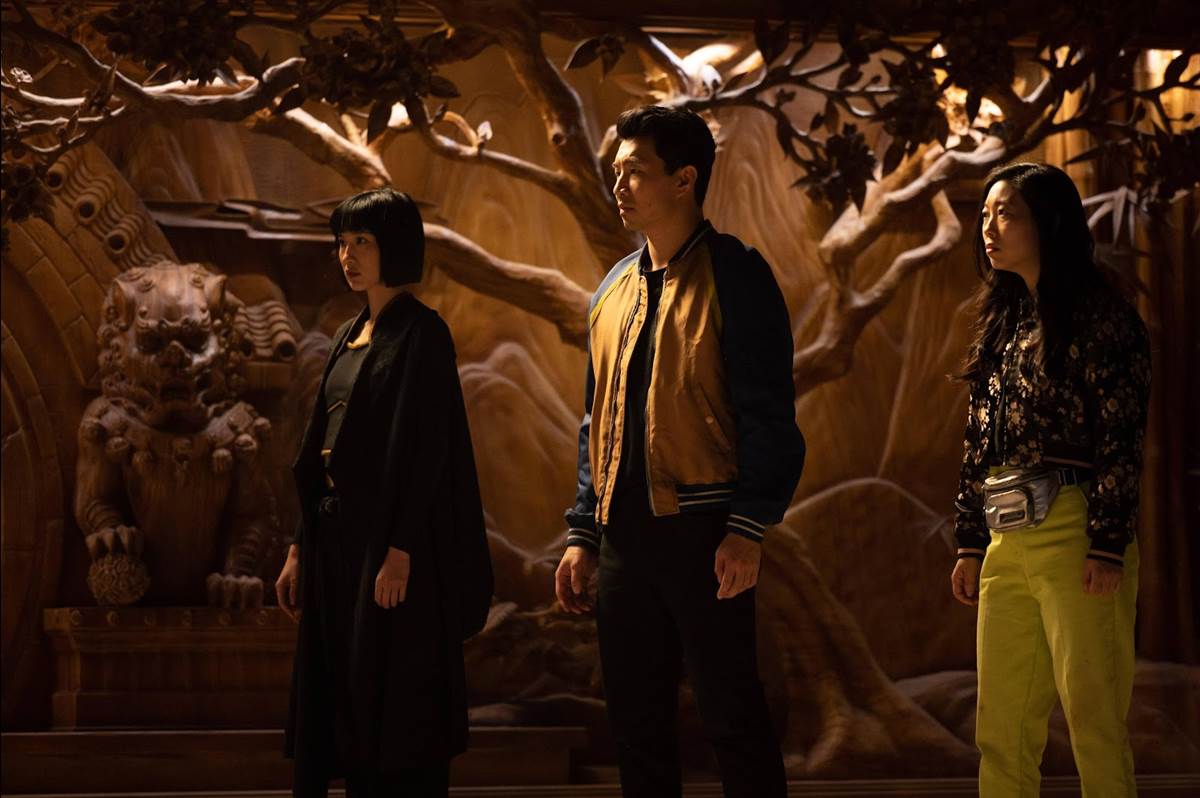 Kingsley talked a bit about the cultural impact of this movie and what it was like to work with a cast made up primarily of actors from another culture.

“As soon as I arrived on set, the fact that my colleagues were from a different culture was immaterial,” he said. “Completely immaterial and irrelevant. We are actors together. We live on empathy and transformation and this is our currency. All the rest is irrelevant. If we can demonstrate that energy I think it will be soothing and healing.”

Zhang discussed making the transition from stage acting to performing in such an action-heavy movie and joked about one particular instance that surprised her.

“When we were doing some stunts, it was just so different from stage acting,” she said. “I remember the makeup team doing the final touch on my fringe, making sure everything’s perfect and some people came to tell me ‘there will be some wind, a little bit of water, a little bit.’ And so I’m going ‘ok, ok.’ So I was ready, I’m in character and ‘three, two, one, action’ and the wind was like [whoosh]!”

Akwwafina touched on what it was like to handle some of those action sequences as well.

“I actually went to a race track and learned how to drift, which is really fun but probably not practical in any scenario like traffic,” she joked. “And yeah I learned how to shoot a bow and arrow.”

Liu was asked about what it was like to work with a cast of so many incredible actors.

“It was like impostor syndrome every single day,” he said. “It was such a treat and it was all I could do just not to mess it up. When I was first cast, I did my final screen test with [Awkwafina] and she did such a wonderful job of putting me at ease. My nerves were sky high. I was an actor from Toronto, I really had never allowed myself to imagine being a part of the MCU, it was the craziest dream that anyone could possibly dream. And Nora did such a great job of putting me at ease and just being in the moment with me and we had such a beautiful chemistry.”

Cretton was asked about the relationship between Shang-Chi and Katy in the film and whether or not they were ever planned to be respective love interests.

“I mean aren’t all friendships potential love interests?” he joked. “When one of our co-writers, Dave Callaham and I were creating this relationship, we actually have a lot of friends who are not the same gender as us and it is strictly platonic but also very intimate, caring and we haven’t seen a lot of that on screen and we’re really excited to create that relationship between Shang-Chi and Katy.” Liu and Feige were asked about the former’s infamous tweet where he asked for the role and whether or not that actually lead to him being cast. Liu deferred to Feige, looking for an answer himself.

“I did not see that,” Feige said, drawing a laugh from the group. “And unfortunately Simu, it was not your tweeting, it was your acting ability, your constant professionalism and the multiple reads and meetings that you did.”

He did go on to joke about not knowing if the casting director saw the tweet and Liu encouraged people to “speak it into the universe and it will find a way.”

Cretton poked some fun at the star of the film, pointing out that he did the infamous Black Widow pose in his first audition.

“He did actually the exact backflip that is that pose that’s made fun of in Black Widow,” he laughed. “He did a backflip into the Black Widow pose, hair flip up, looking straight into the camera as the closer to his audition.”

Cretton also talked a bit about the pressure of directing a major Marvel film, and getting advice from his friend, Black Panther director Ryan Coogler.

“The thing that Ryan said to me which really eased my mind was ‘the pressure is hard and it’ll be the hardest thing potentially that you have done up to this point but none of that pressure or none of those complications come from the people that you’re working with or for.’ And that’s what I found, this is a very special place to work.”

Finally, Kingsley talked a bit about reprising his role as Trevor from Iron Man 3.

“I did get very fond of Trevor. He has his vulnerabilities. He has his history and he has his issues. And I think that he found in himself perhaps moments of empathy and kindness,” he said. “I think also there’s a wisdom that he doesn't believe he has, but he does have. And I think, with his work in Shakespeare, he’s beginning to perhaps grow into a silhouette that’t larger than the one he thought he had.”

Marvel’s Shang-Chi and the Legend of the Ten Rings comes to theaters on September 3.