After years of watching your favorite characters like Captain America, Iron Man and Spider-Man, you may think you know everything the Marvel universe has to offer. However, the 80+ years of comics have given us far more than just these iconic heroes. It’s also given us all kinds of bizarre monsters and creatures from all kinds of wacky places.

Marvel Monsters: Creatures of the Marvel Universe Explored, by Kelly Knox, is the perfect guide to all of these strange characters. 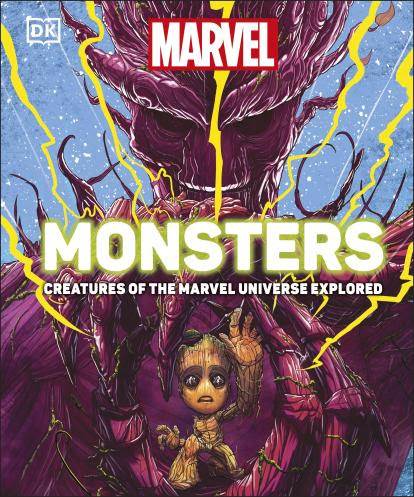 Marvel Monsters offers detailed pages on a wide variety of characters. From fan-favorites – like the Hulk, Groot and the Lizard – to relatively unknown ones – like Zzutak, Goom and the Green Thing – this book has them all. It’s the perfect informational tool for hardcore fans and casual fans alike.

The characters are divided into several groups for organizational purposes. Those groups include aquatic, amphibians and reptiles, mammals, aerial, artificially created, space and other dimensions and monster teams.

Each character gets at least a two-page spread with a brief summary of their history and a list of significant comic appearances, including their first. The book also gives us descriptions of each character, including their height, weight, origin and powers. There’s typically also an additional blurb explaining some of these character relationships with some of our favorite heroes.

The real highlight of this book though is the remarkable collection of comic book art. Each character gets a nearly-full page image pulled from their various comic appearances. The information on all of the characters is great but it’s this art that really puts this book over the top. Plus, the splash pages between groups of characters are truly incredible, especially the one featuring some of the Avengers taking on the Mindless Ones. 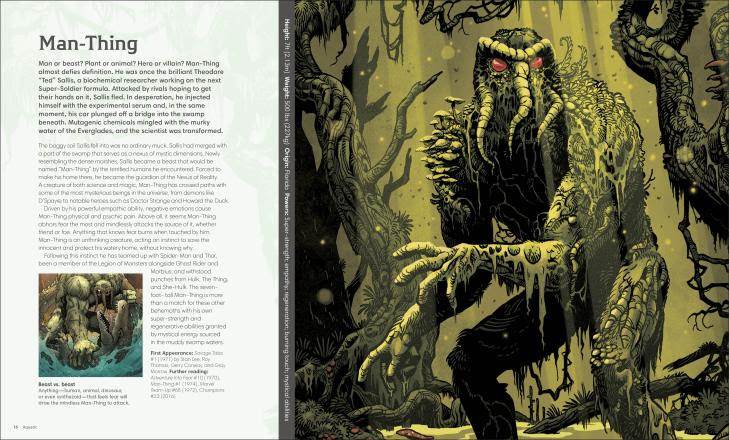 Additionally, some characters get an extra page breaking down their unique anatomy. Whether it’s the rentals of Monstro or the spiked tail of Fin Fang Foom, this book really provides information on every last detail of these bizarre characters. The only downside to Marvel Monsters is that it simply isn’t long enough. The Marvel universe is loaded with monsters and other creatures and the 200 pages of this book simply cannot contain them all. Doop and Zzzax are just a couple of omitted characters that come to mind. In other words, the only negative about this book is that there simply isn’t enough of it.

Overall though, Marvel Monsters is a great addition to the collection of any Marvel fan. Whether you’ve heard of every single character in this book or they’re all brand new to you, the information and the incredible artwork is enough to make this book worth a purchase. If nothing else, it’s a great collection of characters and directions to where you can find them in the long history of Marvel Comics.

Marvel Monsters: Creatures of the Marvel Universe Explored, from DK Children, is available now for $25.