“I used to live in a house on top of Lookout Mountain in Laurel Canyon,” Courtney Cox started about her personal ghost story at the TCA Summer Press Tour while discussing her upcoming series Shining Vale, a hybrid horror/comedy for Starz. “I wouldn’t know a ghost if literally one was sitting on my lap, I’m just not that kind of person. But my [acting teacher] used to come out and she’d say, ‘It’s weird. I have a feeling in this house, I keep feeling drafts…” And then I had another friend come out and they had a dream that they saw this woman in a white dress, and she came and sat down on the bed next to me, and I thought okay. So I didn’t still believe it, but one day I was at the door and the doorbell rang. It was a FedEx guy and he goes, ‘Are you aware that there is a spirit in this house?’ And I go, ‘No, why are you saying that?’ and they said, ‘Because they’re standing right behind you.’” Long story short, Courtney Cox doesn’t live there anymore. 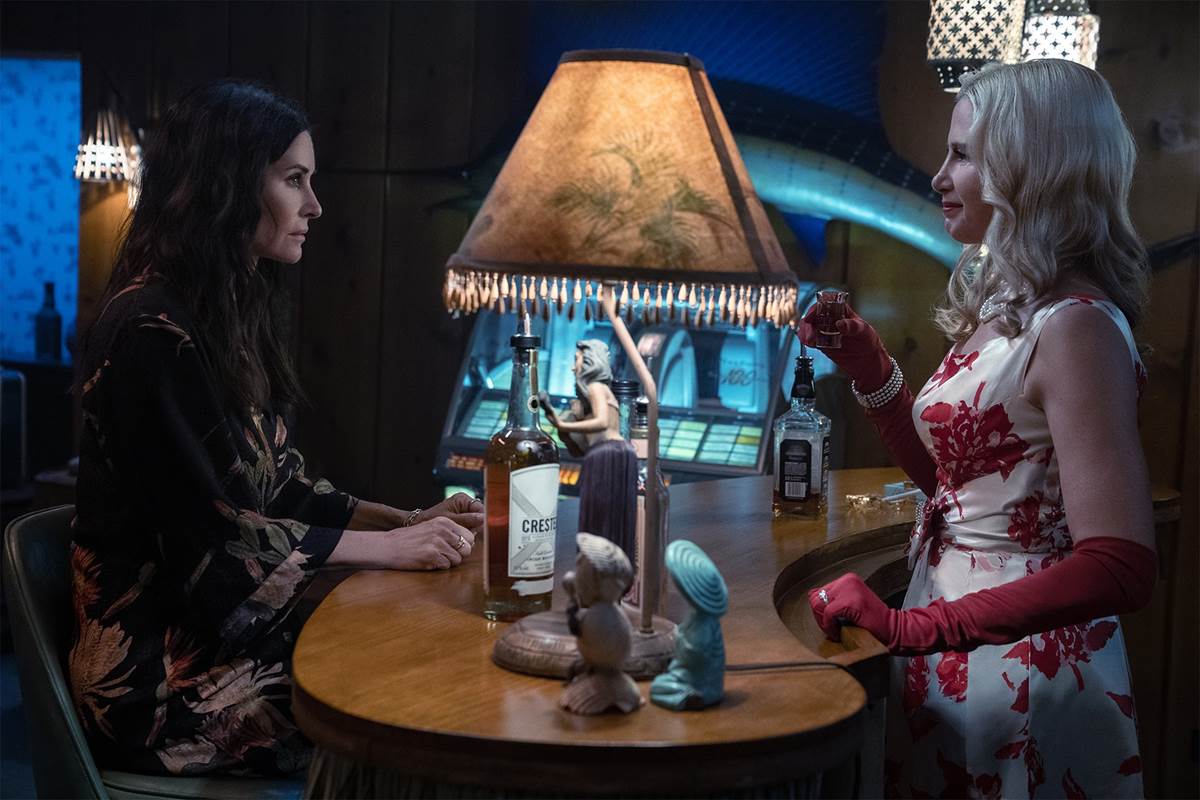 Scheduled to premiere in early 2022, Shining Vale tells the story of Pat (Courtney Cox), a writer who moves into a house in a small town with her dysfunctional family (including husband Terry, played by Greg Kinnear) where she begins to have symptoms of possession. “We're big horror fans as well as comedy fans,” executive producer Sharon Horgan explained. “It was just as important that it be scary as it be funny, you know, the balance of that… We didn't want the horror to bring any laughs. When the horror kicks in, we wanted it to be properly scary. So it's a really obnoxious thing to say that we're trying to create a new genre but actually, we did, and we achieved it.”

Mira Sorvino agreed, describing each script as “Laugh-out-loud funny.” Sorvino plays Rosemary, a character she dropped hints about. “I am only visible to Courteney,” she dropped the first clue. “I may or may not have existed in the 50s in the form of an unhappy housewife who dreams of the stage or the screen… I may be good or I may be naughty. And I try and enlist Courteney’s character on a series of somewhat self-oriented adventures so that I can live through her a little bit. But I think I’ve already said too much.”

Jeff Astrof wrote the pilot and didn’t necessarily have an actress in mind for the lead role. As luck would have it, the script ended up in the hands of Courtney Cox, who worked with him 25-years-ago on a little show called Friends. “Courteney is like you've never seen her before,” Jeff Astor promised. “To have these actors do this and bring it to life in such cool, crazy ways, it's really, really fun.”

Shining Vale also brings Courtney Cox back to the studio where Friends filmed for 10 seasons. “We’re shooting on the Warner Bros. lot, I think we should point out,” Greg Kinnear volunteered. “We shot the first episode in South Pasadena where we found this amazing house and then somehow they managed to create this whole universe here on the lot.” The cast and creative team also describe the show as having a cinematic quality to it. “It’s a great ensemble, it’s a great dynamic, and the idea of mixing the horror with the comedy has been really fun to find that balance.”

“We were on Stage 5, that's where the attic is in the show,” Courtney Cox shared about being back in the same soundstage she spent the first season of Friends in before it expanded into Stage 24. “There was one bathroom that we all had to share, including the crew, so we didn't stay on that stage very long.” As for the dressing room she currently has, she believes it may have been a hangout space for her and her five costars. “It may have been the room that we all played poker in, that's what I think it was.”

The cast was taking a break from filming the season finale when the interview session occurred and Cox confirmed that none of her Friends cast have cameos this season, but she didn’t rule it out for the future. “Lisa [Kudrow] has worked with Greg and Mira, which would be one reason to get her on board,” she shared. Two of her friends have already seen the show, too. “I showed Lisa and Jennifer [Aniston] and they were so scared, they couldn’t watch… [Lisa’s] petrified of everything. I don’t know if you saw the reunion, she was scared of a spider.”

And for horror buffs, Shining Vale offers lots of genre-specific easter eggs. Even the title is a bit of a reference to The Shining, which also informed Pat’s profession as a writer. “We had the curtains, which are close enough but not close enough to sue, based on The Overlook Hotel carpet,” Jeff Astrof revealed. “The kitchen is Rosemary's Baby colors.  We have wallpaper from The Shining… Sharon and I set out very, very ambitiously to create kind of a new genre of something that's really, really scary and really, really funny. To that end, I think it's more psychological. I think It's more in the realm of Rosemary's Baby or The Shining. There's a reference to Texas Chainsaw Massacre, only because Terry does some woodworking and we see the set looks like no place that you'd ever want to leave your kids, but it's not gory. There are a lot of jump scares, but it's more of a thriller.”

Prepare to be thrilled in 2022 when Shining Vale premieres only on Starz.