TV Recap – Zombies Infest the MCU in Latest Episode of “Marvel’s What If…?”

Marvel’s What If…? continues to give us something new each and every week. We’ve seen a war film, a space romp, a murder mystery and a heartbreaking horror story. This week though, the Disney+ original animated series jumped right into a very specific subgenre within the realm of horror: zombies! 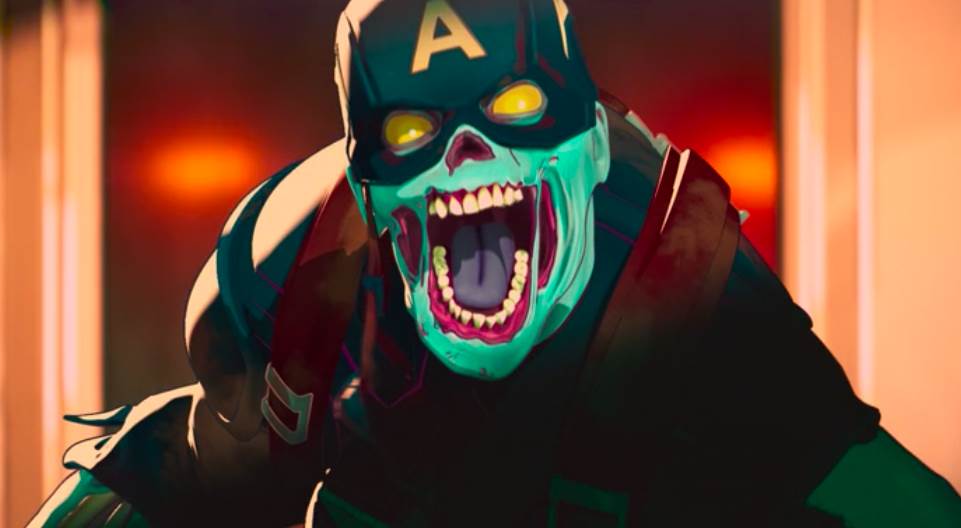 The episode opens with Bruce Banner being sent to Earth to warn the Avengers of the imminent arrival of Thanos, just like we saw in Avengers: Infinity War. Only this time, no one is around to heed his warning. He finds the city deserted when Ebony Maw and Cull Obsidian arrive. At the last moment, he is saved by Tony, Doctor Strange and Wong, but it doesn’t take him long to realize something is wrong.

Once the Avengers dispatch of the two children of Thanos, they immediately begin eating them. When Bruce realizes what’s happening, they come after their old friend as well. You might think handling zombies would be no problem for the Hulk, but on top of the green guy still not wanting to come out, these are also not your typical zombies. It appears the zombies have retained the powers of the heroes they once were, making them super zombies.

Bruce is saved first by the Cloak of Levitation, which holds off the zombies momentarily. Eventually, an army of ants, led by the Wasp, handle the zombies for good. Spider-Man then scoops up Bruce as he swings by, reassuring him that he doesn’t plan to eat him.

The Watcher finally explains what has happened in this universe. While lost in the quantum realm, Jan Van Dyne contracted some kind of virus that turned her into a zombie. She passed that along to Hank Pym and, when they both returned, they passed it along to others. The Avengers attempted to stop the spread but once they were taken too, the world had its first super zombies, causing the virus to spread even more quickly. 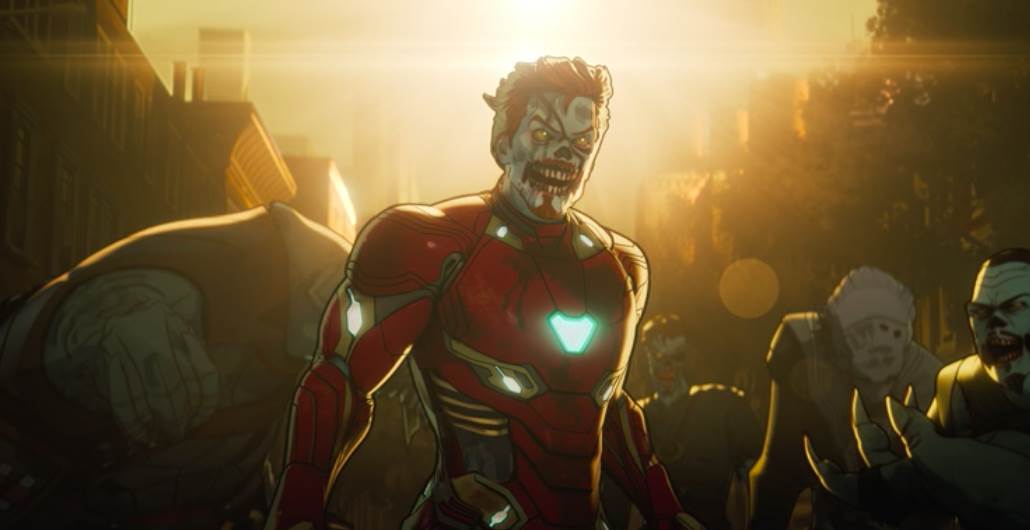 A playful Peter Parker original video starts playing, introducing the remaining survivors and laying out the rules for how to survive the zombie apocalypse. The remaining team includes Happy Hogan, Kurt, the Winter Soldier and Sharon Carter. Okoye interrupts the video and introduces herself to Bruce. Of course, Hope is a member of this team of survivors as well.

Okoye explains that they’ve received a beacon explaining that someone may have found a cure for the virus. They piece together that it is coming from Camp Lehigh in New Jersey and plan to head to the former S.H.I.E.L.D. base.

The team arrives at Grand Central Station, planning to take a train to New Jersey. They split up, with one team trying to get a train up and running while the others guard the perimeter. Happy and Sharon are attacked by what turns out to be zombie Hawkeye, while zombie Falcon comes after Okoye and Bucky. Happy is taken quickly and Sharon is pinned down by an arrow. Sharon takes out Happy while Okoye eliminates Falcon, but that still leaves the team surrounded by a large group of normal zombies. It’s also worth mentioning that the team seems largely desensitized to the deaths of their former friends.

Wasp and the Cloak hold off the zombies while the others try to get on the train in time. Peter, who gave the train a boost with a web slingshot, gets on at the last possible moment, thanks to the cloak, and the team is on their way to New Jersey. Okoye apologizes to Peter for making the team split up, even after he warned them against it, citing every horror movie ever.

On the train, Sharon is attacked by zombie Captain America before Bucky comes running to her aid. He’s too late to save her, but just in time for a showdown with his old friend. Hope rushes in and deals with the now zombie Sharon, while Bucky takes out Cap and claims the shield for himself. Hope destroys Sharon from the inside but Bruce notices a cut on her arm, which means she is certainly now infected. 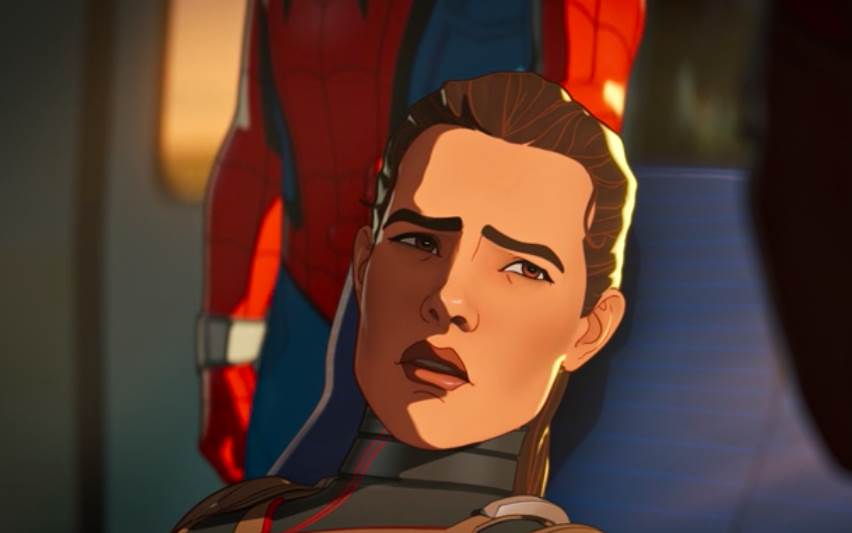 Hope tries to convince the team to eliminate her before she becomes a threat but Okoye refuses because they could be close to finding a cure. In a brilliant character moment, Peter tries to sell Hope on the idea of, well, hope. When she questions how he manages to stay so upbeat, he goes into the list of people he’s lost and explains they would want them to keep going. It’s an emotional moment and a perfect summary of who Peter Parker is.

Kurt arrives to let the team know that the train is out of fuel and they are now stuck. They can walk the rest of the way but he points out the massive horde of zombies they will ne ed to get through. They establish that they won’t make it through them, so Hope decides to sacrifice herself by growing and carrying them through the zombies to the gates of Camp Lehigh. She tells Peter to smile before she falls into the zombies and is lost.

The remaining team notices the zombies won’t cross the fence into the camp. Kurt warns the team of Baba Yaga before Vision surprises them.

Vision takes them to a lab and explains that he has been working on a cure for the zombie virus. He proves that he was successful by introducing them to the surprisingly living Scott Lang, who is now just a head in a jar. The team plans to use Vision’s cure on the rest of the world, but he seems hesitant and only admits that the cure would work “theoretically.” Still, they plan to broadcast a signal from the mind stone from Wakanda, spreading the cure around the globe.

Bucky goes to look for a vehicle but Vision warns him that he won’t find what he’s looking for. Bruce discovers that they are not the first ones to respond to Vision’s signal and Peter questions where the other survivors are. As Bucky searches, he finds zombie Wanda in some kind of tank. He shoots at her before T’Challa, who is not a zombie but it laying on a table with a missing leg, warns him not to anger her. T’Challa explains to the whole team that this is Vision’s trap. He has been luring survivors in to feed to Wanda.

Vision explains that Wanda could not be cured because of her powers and that his only option was to contain her and her hunger. When Okoye asks why he didn’t eliminate her, he tells them he couldn’t. Okoye tries to attack Vision but is interrupted when Wanda enters the room. She quickly claims Kurt before going after the others. Vision helps the others to escape and collapses the building but now before Wanda also takes Okoye.

Vision explains that he can’t leave Wanda behind but want to help them, so he rips the Mind Stone out of his own head, killing himself. The removal of the stone is a signal for the other zombies to enter. Bruce picks up the stone as Wanda emerges from the rubble of the toppled building. Bucky holds her off while the others make a run for it. Wanda sees what has happened to Vision and angrily attacks Bucky. 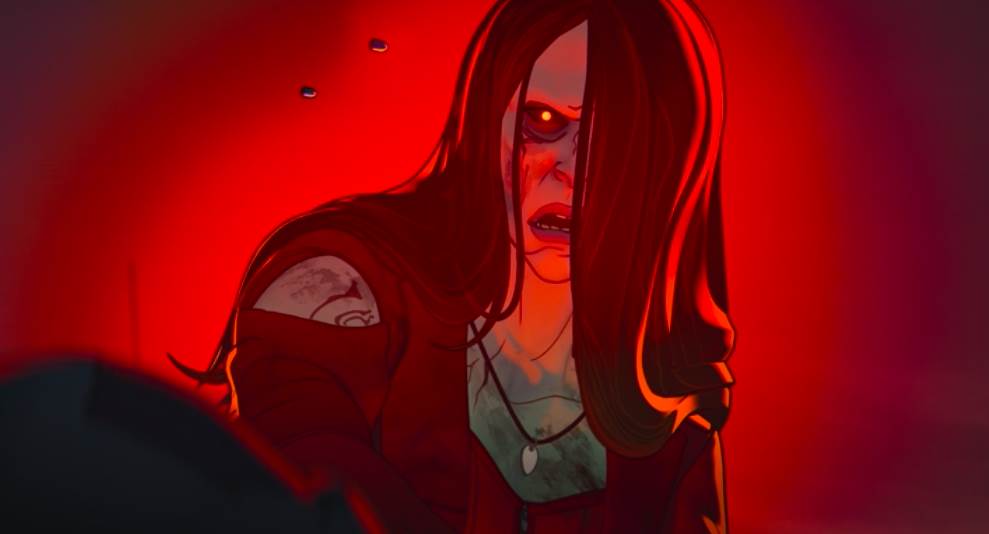 The team makes it to a Quadjet, but Bruce also decides to stay behind to buy them time. The Hulk arrives just in time to put up a fight with Wanda while Peter, T’Challa and Scott make their escape with the Mind Stone in tow. Before they get away though, Hope grabs a hold of them. After a struggle, they manage to get away from her. Peter has to explain to Scott that Hope gave her life for them to get the cure.

As the team celebrates their victory, the Watcher explains that humans will “give all to save their planet.” But, he also explains that their plan could bring an end to the universe as we See a zombie Thanos waiting for them in Wakanda, with the other five Infinity Stones already in his gauntlet.

This is the strongest episode of Marvel’s What If…? Yet. In fact, of all of the Marvel Cinematic Universe projects, this feels the most like a comic book in terms of storytelling and character development. There are several great character moments, including that one with Spider-Man which will go down as one of Peter Parker’s best on-screen moments in any medium. It’s also so wildly different from anything we’ve seen before and just a lot of fun to watch.