Was Tim Kono working to take down a black market jewelry dealer? Did he expect that he might be murdered? What else does tattoo artist Tavo know? You’re about to find out in our recap of the 6th episode of Only Murders in the Building on Hulu, titled “To Protect and Serve.” 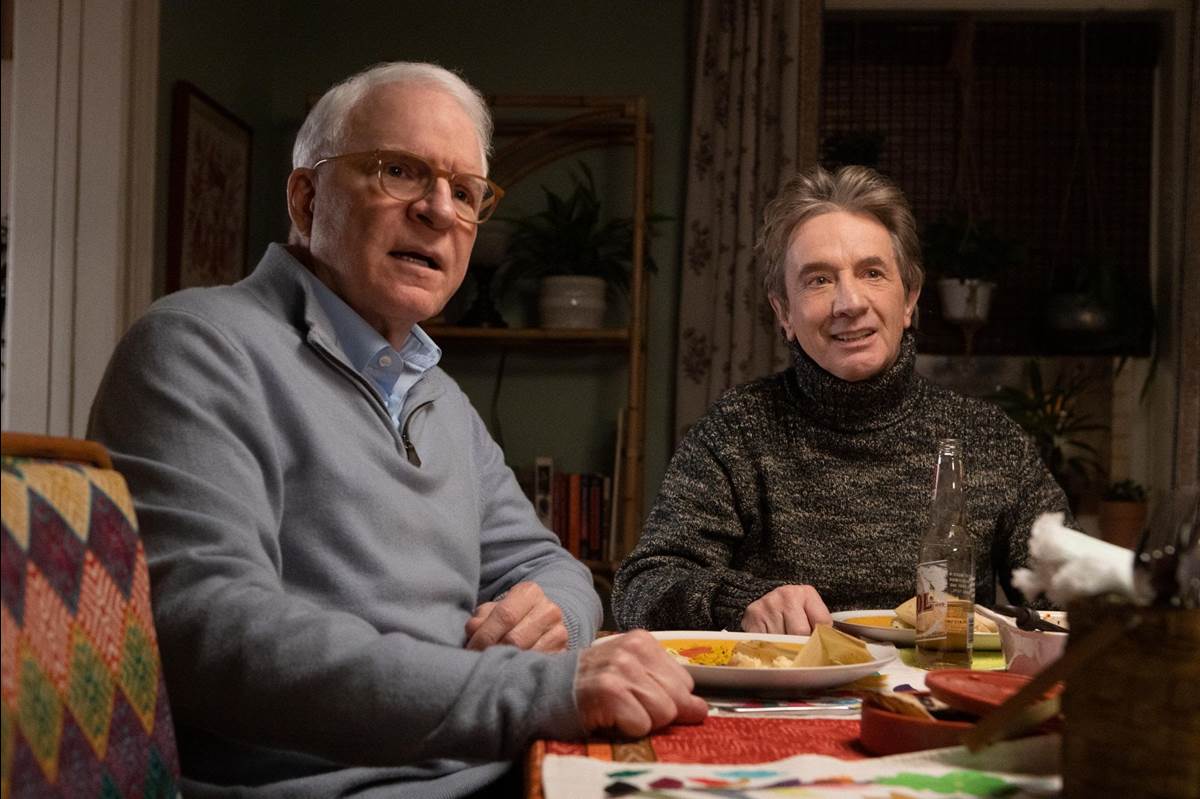 Detective Williams (Da'Vine Joy Randolph) serves as the narrator of this episode, last seen in episode one as the officer who stopped Charles, Oliver and Mabel when they took the service elevator to the 7th floor of The Arconia and discovered that Tim Kono had been murdered. She’s married and her wife (Alysha Deslorieux) is pregnant, decorating the nursery while listening to the podcast “Only Murders in the Building. The wife gives Detective Williams a hard time because she smelled smoke on her breath, but the detective gets agitated when she overhears the podcast talking about a case she closed. When her wife implies that Detective Williams made a mistake on the case, she gets upset and leaves.

Charles (Steve Martin), Oliver (Martin Short), Mabel (Selena Gomez) and Oscar (Aaron Dominguez) are staring at the jewels on the pool table in the tattoo parlor, which Mabel found in Tim Kono’s apartment. Tavo (Esteban Benito) tells them that Tim bought them from someone named Angel and that there was a specific piece he had been looking for. Mabel asks him to text her a picture of it. Tim had primarily been working with a dealer named Cutter and he had an appointment to meet them today. Their meeting is interrupted by a woman who walks into the tattoo parlor upset because her daughter is in her neighborhood of Bayport and didn’t call her.

Cut to Mabel’s childhood home where her mother, Sylvia (Mandy Gonzalez), has invited them all to dinner. Sylvia is upset that Mabel is stuck in the past and still focused on her friends from The Arconia, but over dinner, she learns that Tim Kono was murdered and that Mabel is involved in a podcast with her two older friends. Mabel is upset with her mom for treating her like she’s still a child. Coming clean to Charles and Oliver, Mabel explains about Zoe’s death and how Oscar was blamed for it.

At the office, Detective Williams pulls out Tim Kono’s file and discovers two things: The toxicology report was never submitted and the cell phone she collected from the apartment was never sent to I.T. When she goes home, we learn that Detective Williams met her wife when she had to pull her over. She’s anxious about becoming a mother and worries that she won’t be good at it. They also disagree on the baby’s name, with Williams’ wife preferring Kareem (after Kareem Abdul-Jabbar), but Williams wants to name the baby Keith. When her wife asks about the Tim Kono case again, Williams tells her about the unsubmitted toxicology report and the cell phone that didn’t make it to I.T. She tells her to reopen the case, but Detective Williams tells her that there must have been a reason they weren’t submitted and she would become a target if she did.

Charles and Oliver assist Sylvia with cleaning up dishes and she tells them she blames herself for letting Mabel spend summers with her aunt in The Arconia while she worked. She asks them to stop the podcast and get out of her daughter’s life, but Mabel interrupts. She says goodbye to Charles and Oliver at the door, saying what feels like a final farewell. “It’s been the most alive I’ve felt in a decade,” Charles tells Mabel as Oliver agrees.

Back at The Arconia, Charles and Oliver sit down to bottles of Gut Milk, which they have come to like (it’s 13% alcohol). Charles decides that they can’t continue the podcast without Mabel because it would be exploiting her life. Oliver gets a text from Teddy Dimas’ the podcast sponsor, saying he needs to speak to them right away. Oliver asks Charles to go with him for support, thinking the sponsor is upset.

Oscar explores Mabel’s bedroom, where she made a paper tree of life as a teenager and has a cardboard cutout of Detective Stabler from Law & Order: Special Victim’s Unit. “I know it’s nothing compared to what you went through, but I had it pretty hard after what happened,” she tells him. Oscar finds a stack of old photo albums and when Mabel pulls one with embarrassing childhood pictures away, it reveals one marked “Hardy Boys.” When Oscar opens it, the polaroid photo of Mabel, Oscar, Zoe and Tim from the night Zoe died falls out. Picking it up, Mabel is in disbelief as she pulls up the photo Tavo sent her of the piece of jewelry Tim Kono was tracking down: a ring with a big green stone that Zoe wore that night. Oscar remembers that Zoe didn’t have the ring on when she died and he gets agitated, asking to change the subject. “All I wanted to do today was just be with you,” he tells her. “I’ve thought about this moment a lot. I’ve thought about you a lot.” Mabel reciprocates the feelings and they lean in for a kiss.

Teddy Dimas (Nathan Lane) puts a clip on from tonight’s episode of The Tonight Show with Jimmy Fallon with guest star Cinda Canning (Tina Fey), who jokes about how everyone has a true-crime podcast now, including Brazzos. The two laugh over the fact that the lead suspect in the case is Sting, but when she lists the show’s title, Jimmy rolls over laughing: “Dima’s Chicken Wraps Presents: Only Murders in the Building.” Jimmy responds that he loves Dima’s Chicken Wraps.

Turning off the TV, Teddy tells Charles and Oscar that Jimmy Fallon is big in Greece and his whole family is going to see this. He’s hard to read and they think he’s angry, but he’s beyond thrilled at how jealous they will all be, congratulating Oliver. He wants to write another check for $50,000 to sponsor the next three episodes. Charles tells them they lost their partner and can’t continue the show, but Teddy leads them to a mantle and points out a framed coin. He tells the story of his “γιαγιά,” his grandmother who survived the Greek and Armenian holocaust and was allowed to keep just two coins from her family’s life savings, one to invest in her future and the other for luck, which has been passed down through generations. Teddy elaborates about his estranged relationship with his father, who didn’t want him to have the coin. When Charles asks if he changed his mind, Teddy tells them he may have dug his grave to retrieve it, laughing like that might have been a joke, but it’s unclear. He tells them that his γιαγιά taught him to make investments in people who have been loyal and asks them to do him the honor of accepting the check and continuing the show.

After Oscar leaves, Mabel’s mom asks if he was a good kisser, inferring that based on the way he was looking at her during dinner. She tells her mom that Charles and Oscar are the first friends she’s had in a long time. “I have to see this through, I have to figure this out.” Mabel’s mom recalls that as a child, Mabel would never wait through a story, but always had to skip to the end to find out what happened.

Detective Williams returns to her office, sitting at her desk listening to the podcast. We see her pull Tim Kono’s cellphone out and put it in a bubble mailer. She addresses it to Mabel.

Back in Charles’ apartment, Oliver is having a hard time bringing himself to tear apart Teddy’s check when Charles notices something. The company on the check is not “Dima’s Chicken Wraps,” but the company he uses to invest in other businesses: Angel, Inc. “Oh, no, Teddy is not the Angel that Tim was trying to take down,” Oliver defends his producing partner. Mabel bursts in with tamales from her mom and expired hummus for Oliver, apologizing for lying and confessing that she has trust issues. “I want to do this podcast,” she announces. “I have to finish this with you guys.” She pulls out a bubble mailer that was waiting for her at the front desk and reveals that Tim Kono’s cell phone was inside, but she doesn’t know the password. Walking over to the suspect board, Charles pins up a photo of Teddy Dimas in the top spot. “Our prime sponsor is now our prime suspect,” he says. Oliver thinks it’s going to make a great last line of a future podcast episode.

Only Murders in the Building will be back on Tuesday, September 28th, with episode 7: “The Boy from 6B.”