Shattered Midnight is the second book in the innovative four-book fantasy series The Mirror. The story takes place long after the events of the first book (Broken Wish by Julie Dao) and places readers right in the middle of the roarin’ 1920s in New Orleans. Intrigue and dangerous gangsters energize this heartfelt tale of love, lessons, and the unprecedented places that magic can take you… 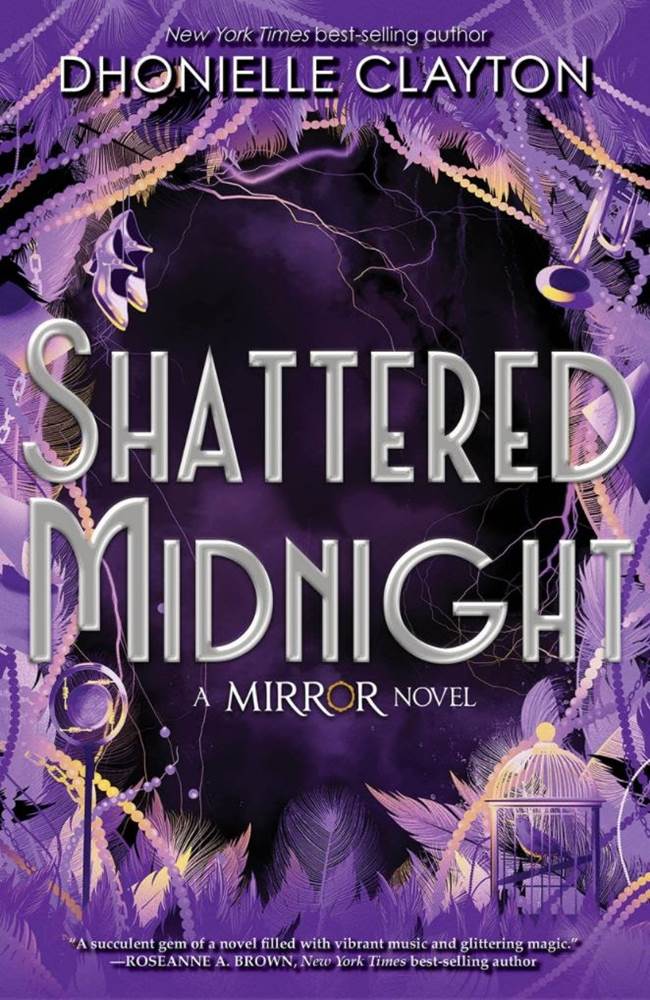 What is Shattered Midnight about?

Zora Broussard has arrived in New Orleans with not much more than a bag of clothes, a beautiful voice, and a pair of enchanted red shoes. Running from a tragic accident caused by her magic, Zora wants nothing more than to blend in, as well as to avoid her overbearing aunt and mean-spirited cousins. Music becomes Zora’s only means of escape, yet she wonders if she should give it all up to remove the powers that make her a target, especially as a Black woman in the South.

But when Zora gets the chance to perform in a prominent jazz club, she meets a sweet white pianist named Phillip with magic of his own, including a strange mirror that foretells their future together. Falling into a forbidden love, Zora and Phillip must keep their relationship a secret. And soon the two discover the complicated connection between their respective families, a connection that could lead to catastrophe for them both. In the era of segregation and speakeasies, Zora must change her destiny and fight for the one she loves . . . or risk losing everything.

There is a lot to love about New Orleans but author Dhonielle Clayton takes it to a whole new level in this story. Beautifully written with engrossing characters, Clayton transports readers to another time and place. Yet, despite some differences between 1920s Nawlins and the present, many of the same lessons and challenges remain. Readers learn a lot from Zora about sacrifice, the pursuit of purpose, embracing one’s talents, confronting terrors of the past and the importance of pursuing a path forward, despite how tumultuous and controversial one’s choices may seem at the time.

Zora has no interest in preparing for the upcoming debutante season, much to the chagrin of her insistent Aunt Celine. At night she secretly performs under the stage name “Sweet Willow.”. For Zora, music is a calling, a passion, a talent… and also a conduit for magic. (Her grandmother, Mathilda, who fans of the series have already been introduced to in book one, Broken Wish, is responsible for passing this powerful magic down to Zora.) Zora is intent on banishing her magic to protect those around her.

These and many other examples throughout illustrate the conflict – both internal and external – that Zora faces and the difficult choices she must make. Prejudice, promises, secrets and strength are key ingredients to the tale and are consistently executed in an engaging, original and significant way. Readers will be inspired to challenge themselves and hopefully to learn from the trials and tribulations encountered in this enchanting book.

Dhonielle Clayton is a New York Times Bestselling author of The Belles series, the coauthor of the Tiny Pretty Things duology which debuts as a Netflix original series soon, and the author of the forthcoming MG fantasy series The Marvellers. She hails from the Washington, D.C. suburbs on the Maryland side. She taught secondary school for several years, and is a former elementary and middle school librarian. She is COO of the non-profit We Need Diverse Books, and co-founder of CAKE Literary, a creative kitchen whipping up decadent―and decidedly diverse―literary confections for middle grade, young adult, and women’s fiction readers. She’s an avid traveler, and always on the hunt for magic and mischief.