It’s week two in the ballroom, which is arguably the most important week of the competition. We receive the first elimination, along with the narratives around contestants starting to coalesce. Was their first dance a fluke or is improvement already visible? Just after one dance, I already am confident in my favorites and ready to see some get the axe. After a ridiculous skit and my new crush Ezra flawlessly dancing in the ballroom, we’re onto the dancing! 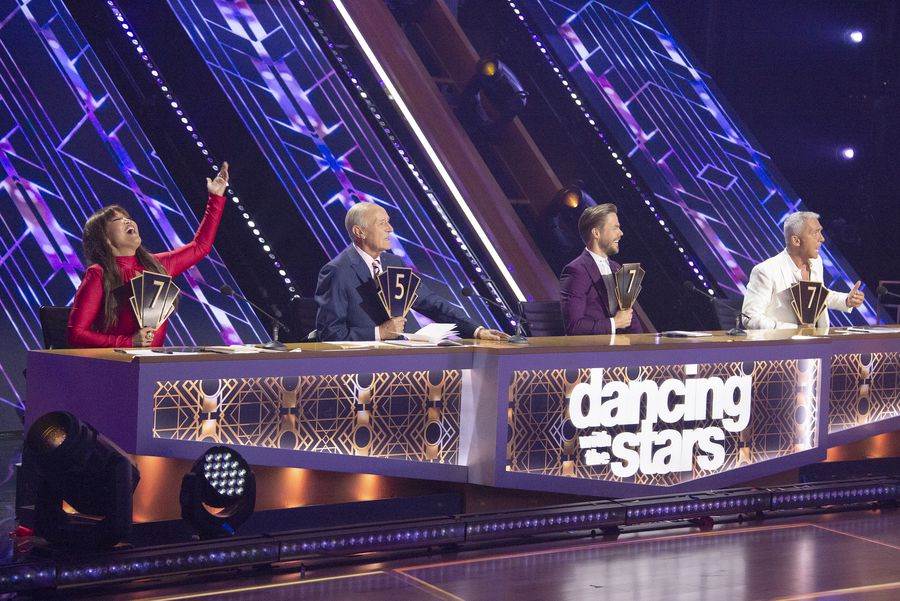 Matt James & Lindsay – Samba – Matt tried to get me on his side, through a Dua Lipa song and being shirtless. Yet, he did not. The man is stiffer than a freshly starched shirt. He was just…a bag of nothing. Len was livid over Matt’s hips, Derek wanted a lot more bounce in his movements, and Carrie Ann Inaba saw her first lift of the season. It’s not DWTS without a Carrie-Ann-Lift-Call-Out! Judges Scores: 5 – 5 – 6 – 6

Olivia Jade & Val – Viennese Waltz – Olivia’s initial video package just has Val getting his make-up done? This show never ceases to be a parody of itself and that’s why I love it oh so much. Their dance, however? A pure delight! The only truly visible problem I saw was her arm extensions, which were a tad wonky, but her flow was wonderful! She is one of the few frontrunners with no dance experience prior to this, but you can’t tell. Len commended not only the dance, but also Val’s choreography, which is always a true compliment from Mr. Goodman. Judges Scores: 7 – 6 – 7 – 7 (Reader, I found these a bit low?)

Kenya Moore & Brandon – Cha Cha – A Cha Cha? To Donna Summer? With Kenya in pink? That is powerful stuff. Also powerful? Her fun routine! A classic dance that felt very old school DWTS. Not a lot of gimmicks, just solid dancing and an amazing attitude. She messed up a solid chunk at the beginning, however she saved herself by the end. Then Kenya went and quoted Molly Shannon’s Sally O’Malley?! She is my everything. Len commented on her gear in the rear. I plead the fifth. Judges Scores: 6 – 6 – 6 – 6

The Miz & Witney – Tango – It remains hard for me to watch The Miz outside of the MTV reality show circuit, but alas, this is my job. The required power needed for the tango was present, but so was a constipation face at the beginning of his dance. Luckily, it quickly turned into a face of excitement and passion. I thought this was a vast improvement over last week. Carrie Ann loved his lines, while Len said his finesse was less than to be desired. Judges Scores: 7 – 5 – 7 – 7

Brian Austin Green & Sharna – Rumba – This couple not only went on a date as an ad for the immersive Van Gogh exhibit, but their entire discussion on this show has quickly become about their romance. It’s already on my nerves. Len hated it. It was buckets of posing, in his eyes. He is just as stiff and boring as Matt James, to be honest. It’s a shame, as I love Sharna so so much. But alas, the romance supersedes the dancing with this couple.

Christine Chiu & Pasha – Salsa – Christine’s DWTS connections are strong, being a consistent audience member back from the beginning. It’s so fun to see her live out her dreams in such a bizarre way. Her passion for the show is evident in her dancing, as both of her dances have been excellent and unexpected. The judges, once again, bring up her potential. Bruno and Carrie Ann both love their passion, but want consistency. I am falling in love with Christine, y’all. Judges Scores: 6 – 6 – 6 – 6

Jimmie Allen & Emma – Rumba – I am so over singers dancing to their own songs on this show. I am well aware that this is not the contestant’s doing, yet if I was in their position, it would be excruciatingly awkward to dance to my own voice. Especially with the dance this week being so sexy, it’s bizarrely cringey. Regardless, he did a really nice job! You could see he was actively working to have beautiful flow and extensions, which Bruno complimented him on. Carrie Ann got choked up, while Len enjoyed his upper body movements. Judges Scores: 7 – 6 – 7 – 7

Amanda Kloots & Alan – Foxtrot – With song choice, choreography, and clothing…this was a dance made for Len Goodman. It was a classic ballroom number in every sense. Its simplicity also resulted in a tremendous performance, with gorgeous extensions, passion, and smoothness. Len wanted it to go on a bit longer, which is the only true positive critique he’s given all night. Judges Scores: 8 – 8 – 8 – 8

JoJo Siwa & Jenna – Cha Cha – They are dancing to “Rain On Me,” making this the gayest moment on television this year. Phenomenal. The dance was equally phenomenal, with Len stating this was his favorite latin dance of the year. Derek asks Jojo to simmer down some of her energy and control it, which seems to be the general thought of the panel. JoJo loves Jenna, I love JoJo, it’s amazing all around! Judges Scores: 8 – 8 – 7 – 8

Iman Shumpert & Daniella – Rumba – He is trying to come back from Len’s brutal score of a FOUR. While the video package just made me want to have Teyana Taylor on the show, the dance itself was fine. The actual content was nice and Iman’s work on his lines was wonderful. While it may not be the best skill wise, his energy and enjoyment is unmatched among the male cast. Bruno commends him, but suggests more work on the feet. Judges Scores: 7 – 6 – 6 – 6

Martin Kove & Britt – Cha Cha – He openly stated that he watched back last week’s dance and called it “dreadful.” The openness was sweet. However, this week showed no improvement. The judges were trying to skirt around blatantly saying “This was garbage.” It was…cute. You know that when the judges give low scores and the audience doesn’t boo that the dance was bad. Judges Scores: 4 – 3 – 4 – 4

Melora Hardin & Artem – Rumba – A dance? To Celine? Maybe I spoke too soon…this dance might be gayer than JoJo’s. While the hips needed a bit more WD-40, her extensions were as close to perfect as possible. Another entry tonight of a simple dance that allows the pair to fully complete their mission. I adored this number and Melora Hardin in light blue! Len came for Melora’s hips and Artem’s choreography, furthering his mission to hate everyone tonight. Judges Scores: 7 – 6 – 7 – 7

Cody Rigsby & Cheryl – Salsa – So…Cheryl has COVID. That’s a yikes, y’all. Cody is negative, but he was in close contact with her, so they are both in quarantine. We were allowed to watch their pre-taped rehearsal for scoring. Both of them are able to virtually enter the ballroom for critiques…but tell me how even the rehearsal was my favorite dance of the night? I’m not joking? Clearly, he was marking it due to it being a rehearsal, but it was still so fun! Cody Rigsby, please marry me! Judges Scores: 6 – 6 – 6 – 6 (I guarantee you that if they performed it in the ballroom, it would be one of the highest scored dances of the week.)

Mel C & Gleb – Foxtrot – She said “Liverpool” about fifty times during the pre-dance video, but because it’s Mel C, I can’t even be snarky. I will accept no Spice Girl slander in my recaps! Easy to deny snark, since her dance was truly exceptional. Just as Derek said, her frame and extensions were so gosh darn CLEAN. Just an ethereal performance overall. I loved, loved, LOVED. Len came in with two separate Beatles puns during his critiques, which was pretty impressive. Judges Scores: 7 – SEHven – 8 – 8 (That was underscored tbh…)

Suni Lee & Sasha – Cha Cha – Suni explains how gymnastics makes athletes suppress their emotions…further proving that gymnastics is a toxic environment for all! Suni reminds me of Meryl Davis’ DWTS career. Suni’s almost technically perfect from the jump, but the emotions are hard to find when she dances. It was an improvement from last week, so I’m happy progress is being made. Suni is such a great dancer from the jump, so I’m looking forward to more from her. Judges Scores: 7 – SEHven – 7 – 7

The bottom two are revealed to be Martin Kove and Christine Chiu. Christine being in the bottom two is actually ridiculous, worrying me about their future in the competition. Luckily, Christine is saved, while Martin Kove is our first eliminated contestant of the season. He seems disappointed, but like he expected it. Next week is BRITNEY NIGHT, so expect a lot of freaking out in my recap. Until next week, BA BA DA BA BA BA BA, BA BA DA BA BA!