Fact from Fiction: How the Legend of Malverde was Adapted into Telemundo’s First Period Drama

“This is the first period piece we've produced,” explained Karen Barroeta about Malverde: El Santo Patrón. Karen is the executive vice president of Telemundo Global Studios and also serves as an executive producer on the series. “It was a big challenge for us, but we are happy with the results,” she added during a presentation about the show at the TCA Summer Press Tour. 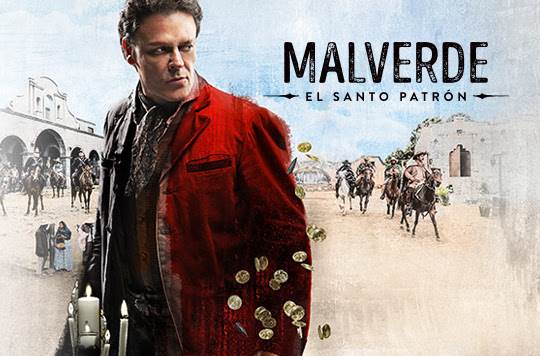 “The most mysterious thing about Malverde is that we really don't know a thousand percent with certainty if he was completely a real character in life,” actress Isabella Castillo explained about the legends that inspired the series. “It's this mysticism that fills Malverde with something that people really never get a hold of. We have an amazing team who obviously did their research, a huge group of actors who also did their research. There are characters that are literally based in real-life stories, and there are some characters like mine.” Isabella plays La China Navajas, an amalgamation of women from the Mexican revolution.

“You always have to dramatize history because, if not, it will be a documentary,” Mark Tacher added, who portrays Vicente del Rio. “We are not here to tell you a documentary of the life of Malverde, but we will put you in the life and in the eyes of Malverde. We are not going to indoctrinate how he thought or where was his house in Mexico. No, we are going to bring you to one century ago, pre-Revolutionary Mexico in the 1900s, and you will see how Malverde lived, how he loved, how he punished the guys that were pushing all of his Native Mexican family away to leave opportunities behind. You are going to see this Robin Hood also to bring this love to the people. That's why I think it's going to be also appealing for men and women.”

Speaking of the show’s appeal, an important key to success for Malverde: El Santo Patrón was about capturing the most important components of the legends. “We did a lot of research into what Malverde meant for people,” Karen Barroeta shared. “We did bring a lot of fiction to it to make sure we had a story to tell, but it was based on what he meant for people and how he lost his parents and how he became a legend.” For all the mythology surrounding the tales of Malverde, the series also folds in real historical moments and characters. “We have Porfirio Díaz that was the president back then, we have Pancho Villa that was in the revolution. We brought a lot of reality in terms of the historical personas and characters that were real at that time. We incorporated it because we know that Malverde was fighting for justice. He was trying to help his people. I think it's somehow very tied to how he was in reality. But, in TV, we like to make magic, and we brought some additional resources, elements, and characters, to make it more entertaining.”

Malverde: El Santo Patrón premieres Tuesday, September 28 at 10pm/9c on Telemundo. Episodes will stream on Peacock a day after broadcast.