If you’re an AEW fan, odds are you’ll already be tuned in to TNT on Wednesday, September 29th, for AEW: Dynamite. Immediately afterward, AEW’s Executive Vice President Cody Rhose and Chief Brand Officer Brandi Rhodes invite viewers into their homes with the premiere of the new reality series Rhodes to the Top. The real-life couple stopped by the TCA Summer Press Tour to discuss the series and what fans can expect. 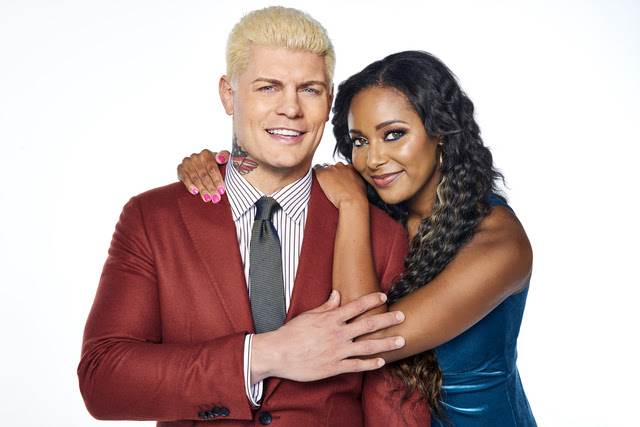 “It’s unprecedented in terms of the access that people have backstage,” Cody Rhodes shared about what separates Rhodes to the Top from other reality series’ about wrestling stars. “What does it really look like in the back of a wrestling show? One of the things I’m really proud of is we come off as such punk rock and this challenger brand and this alternative, and it almost sometimes comes off as disorganized. But when you see AEW, how it really functions, you'll see, wow, it’s incredibly organized and streamlined, and it’s a family environment and a winning environment.”

Speaking of family environments, filming began while Brandi was pregnant with the couple’s first daughter. “I was able to make myself comfortable because no one wants to fight the pregnant lady,” Brandi Rhodes joked about what can sometimes be an uncomfortable experience for reality TV stars, letting a film crew be present for all aspects of your life. “The reality is, is when you do a reality TV show, you should be willing to be real. If you're not, I don't understand what the goal is. I just went into this with complete transparency as you will see.  And especially around things related to the pregnancy… we, as a couple, definitely didn't aim to hide things or didn't aim to change perception on who we actually are. I know who I am. I know that some things about me may rub people the wrong way, but that's who I am.”

For Cody, the series comes at a crossroads in his life and career. “I have been doing this since I was 15,” the wrestling star shared. ”I want to make sure that I can pick this little girl up, and that's gonna be the road we're going on moving forward, and you'll see with Rhodes to the Top, physically, do I have to do as much wrestling at AEW? Tony Khan has cultivated a great roster. They may not need me anymore in terms of actually wrestling or they may still need me or I might think they need me. That's truly the crossroads I'm at is she's the most important thing in my life, and how do I maintain that without being a broken-down old man?”

To find out, you’ll have to watch Rhodes to the Top on TNT beginning September 29th on TNT.