The very first episode of The Ghost and Molly McGee has debuted, and is setting up a great relationship between Scratch (the ghost) and Molly, and their world in the small town of Brighton, introducing new rules and stakes that I’m sure we’ll see throughout the series. 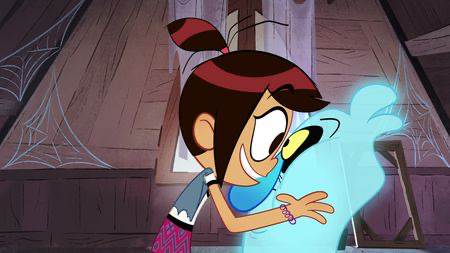 Right off the bat, we see a ghost (not the one we’ll get to know in this series) get sent into some kind of vortex of terror, which seems to be death for ghosts as they didn’t keep happiness levels low in the town they were responsible for. This all happens before a ghost council, which then summons another ghost for review, Scratch. This is that star ghost of the series, and despite an unspecified distaste for this particular ghost (which I’m sure we’ll learn more about as the series progresses) the council is impressed by his ability to keep his town of Brighton in such a state of misery and his happiness numbers low. 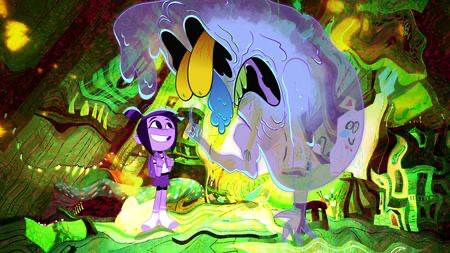 Enter Molly McGee, a young girl who is moving to Brighton with her family, another in a long line of locations that she has been moved to because of her dad’s work. She is moving with her dad, mom, and brother Daryl (who seems to be some kind of troublemaker) along with her Grandma Nin via phone. Molly seems to find the positive in every situation, which is a good thing, because they just pulled up to a rather formidable looking home which we know belongs to Scratch.

Molly immediately heads up to the attic of her new home and claims it as her own when she comes across Scratch, who tries to scare her away. There is no response other than happiness and glee, and Molly considers him a new friend. Scratch finally erupts into a terrifying version of himself, changing the environment around him and curses her saying “Wherever you go and whatever you do Molly Mcgee, I’ll be there haunting you!” All this does is now solidify to Molly that he is now a BEST friend. Wherever she goes and whatever she does? That’s the job of a bestie!

Scratch tries leaving the house to get away from her for a bit when Molly yells out “Come back Scratch!” and he immediately gets locked, almost like a tractor beam, and pulled back to Molly. That’s when he realizes something is wrong and seeks out the ghost council, who is occupied in the ghost world at the coolest nightclub, “Haughty Haunts.” As the council is leaving, they find Scratch at the door begging for help for “his friend” who might have messed up a curse. The council immediately says that the curse sounds more like a curse on the ghost than the human, but another council member points out an important clause…”if you refuse to leave.” Meaning he has to figure out some way to get her to leave, and since Molly is just a child, he should probably try and scare the parents away.

So he tries, and it seemingly works, until Molly hears the noise downstairs and interrupts the terror saying that this is her new best friend just playing around. Her mom and dad realize there is no real threat then, and instead try and get money back from the realtor for not disclosing the presence of a ghost. The family has fully accepted that Scratch will be with them in their home, and Grandma Nin even gives Molly advice that in their culture, they build homes within a home for ghosts, so Molly sets up a dollhouse for Scratch to live in, complete with open floor plan! The adventures of Scratch and Molly are all set up to begin, but wait… the happiness in Brighton has just increased. That can’t be good, right? 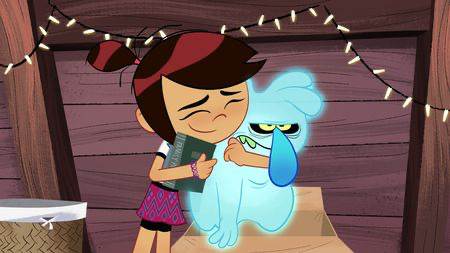 It’s Molly and Daryl’s first day at their new school, and Scratch sees the opportunity to make Molly an outcast that way she has no desire to remain in town and will leave, breaking the curse he inadvertently placed upon himself.

As she introduces herself to her classmates, Scratch flings some goo as she’s addressing the class, and sends Molly into an impromptu dance routine. He thinks this is going to embarrass her beyond belief, but the class erupts into applause.

Some of that applause comes from popular student and social influencer, Andrea Davenport. It should be noted that “Andrea” is pronounced AWN-dreea, and not ANN-Dreea. A lesson that Molly didn’t get, thus ruining her reputation almost instantly as now Andrea sets out to make her life at school miserable. This has happened before to another student, Libby, who Molly encounters. While this sets up Andrea’s intent, I suspect we’ll also see more of Libby as the series progresses.

Scratch is enjoying the torture that Molly has brought upon herself, even using this as a moment to get her to leave the school and town behind. Molly suggests that the day isn’t even over yet, and Scratch grows frustrated, entering his more frightening state when Andrea walks in and gets startled to the point where she faints. Molly scrambles and Scratch helps her wheel Andrea in a cart towards the nurse’s office (even though they only have band-aids there). 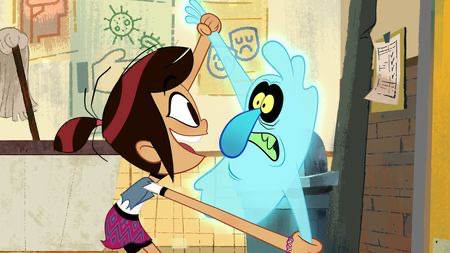 Scratch tugs on a rope nearby to reveal he wheeled Molly along with Andrea’s lifeless body right into the center of a school assembly. When the audience sees them, they obviously are shocked and gasp, and one student shouts “Molly McGee is the Worst of the Worst!” causing Scratch to have a flashback to when the bouncer outside of the ghostly nightclub flung him away calling him “The Worst of the Worst.”

In a fit of sympathy, Scratch possesses the body of Andrea and speaks for her and seemingly redeems Molly, saying that this girl is not the worst, and that she was over the whole Ann-drea/Awn-drea thing. Turns out Scratch was redeeming Libby, with the crowd cheering for the girl who has been outcasted for years. He also added that Molly McGee isn’t that bad either, and the school loved her once again. Scratch leaves Andrea’s body, and the school is already mispronouncing her name and has no idea what is going on.

Molly realizes that Scratch did something special for her and calls him out for it, saying that maybe he considers her a friend too. 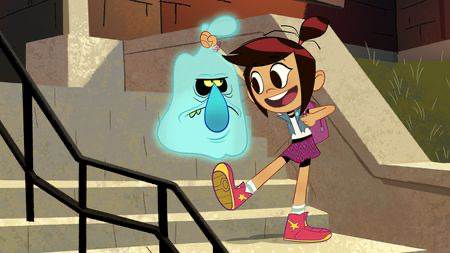 This episode of The Ghost and Molly McGee is now available on the Disney Channel and the DisneyNOW App.