It’s the era of sepia tone and it’s closing time at the Springfield Meatball Factory where a young Abe Simpson (Dan Castellaneta) receives his first paycheck and is angered at losing money to FICA. Along with his friends, Jasper Beardsley and Old Jewish Man (both also in their early adult years), the three brag about how they can make the money back by betting on an animal fight. Cut to the present where all three senior citizens are in a line at the Springfield Post Office to get their social security checks. They all disperse throughout the town, with Mole Man spending his money on bingo, Jasper getting new tennis balls put on his walker, and other residents hitting up the “Large-Print Book Warehouse and Buick LaCrosse Dealership” or “Crate and Burial.” But Abe Simpson goes to Salvador’s Deli where he plays cribbage and wins.

That night, Abe is asleep in his recliner with his feet in a bath and a book (“What to Expect When You’re Expiring”) propped on his face. His flip phone rings (“Geezer Bug” brand) and he wakes up to answer it. “Grandfather, you gotta help me,” shouts a voice that sounds a lot like Bart. Grandpa asks if it’s Bart and the voice says “Yes.” A deeper voice enters the call, telling Abe that his grandson has been apprehended for shoplifting and graffiti and that he has 90-minutes to send money or he will be sent to juvenile detention. Abe rushes into “Best Wester Union Motel & Money Transfer” and approaches the counter: “I need to wire some money to an overseas account to bail my grandson out of an unnamed jail.” We see a line of senior citizens responding to similar scams.

On his way home in a taxi, Abe sees his grandson Bart (Nancy Cartwright) and gets out to give him hugs and kisses. “No grandson of mine is gonna go to jail,” Grandpa says. “Jail? Are you off your meds or on new meds,” Bart asks. Abe learns that he has been scammed and has a flashback to another call where he gave away his social security number and the name of his first pet (Homer). “I’ve been hornswoggled,” Abe exclaims.

Homer (also Dan Castellaneta) is at home watching a channel of nothing but punts called “Punt Zone” (announced by Scott Hanson) when Bart brings Grandpa home and tells the family about the scammer. Lisa (Yeardley Smith) offers to microwave grandpa’s slippers, a service he says he doesn’t deserve. Cheering up his old man, Homer says he would’ve fallen for the same scam if a call said Bart was in jail, but when he learns that Abe had $10,000 and sent it to the scammers, he’s furious. Homer asks his father where he got so much money. “It’s 20 years of my cribbage winnings saved up in a cigar box,” Grandpa shares. “I was gonna leave it to you and now it’s all gone.” Homer visualizes his father as a human-shaped pile of money, which goes up in flames and turns to ashes. Homer is furious, giving his father a rant that ends with “I hope you live forever!”

That night, Homer has a nightmare inspired by Knive’s Out in which he sits around an elegant home library while a man reads the last will and testament of Abraham Jebediah Simpson II. All of the descendants have Homer’s face and when they learn the $10,000 is gone, they look ready to commit murder. Marge (Julie Kavner)  is awoken by Homer’s bad dream and asks “How can you miss money you never knew you had?” Homer has been imagining a variety of ways in which his life could be improved by the money, including having the family’s toaster expanded to include more than 2 slots and replacing Santa’s Little Helper with a more expensive breed, an Afghan Hound.

It’s Back to School Night at Springfield Elementary (the sign reads “Meet the single parent of your kid’s bully”) and Principal Skinner (Harry Shearer) announces that the school is asking each family for a $50 donation to purchase a fundraising thermometer. Homer balks at being asked for money, ranting to the class of parents about how his father was swindled out of his inheritance. Marge gets mad at Homer and he leaves in a huff, spinning the globe by the door in defiance on his way out. Skinner approaches Marge and tells her that his mother was scammed and that she found solace in a support group called S.C.A.M.S. (Support & Care for Adults Manipulated by Scams). “This could be just what we need,” Marge says, taking the card, which Skinner takes back because he does not receive many business cards.

A sign outside the Springfield Community Center announces that there’s a S.C.A.M.S. meeting tonight (“Free T-shirt if you email 10 of your friends this link FEO402PQW0C.com/4M,” reads the sign). Abe is upset about being brought to group therapy, but Marge encourages him to give it a try. Homer sniggers, thinking it’s his punishment, but Marge pushes him into a room marked “Scam-Fams: Supporting Families of the Grifted.”

Abe sits in a group that includes Agnes Skinner (Tress MacNeille), Kent Brockman (Harry Shearer), Mr. Burns (also Harry Shearer) and Moe Szyslak (Hank Azaria). The therapist encourages the group to forgive themselves. Inside Homer’s group, he is joined by the likes of Rainier Wolfcastle (Harry Shearer) and Waylon Smithers (again, Harry Shearer). The therapist gives them a list of things not to say, but Homer writes them down as things he should say. Homer rushes to the other room and yells phrases of blame at his father, who says he’s learned not to feel ashamed. The group chants “Shaming is blaming” at Homer and he gets mad, leaving in a huff and spinning the globe by the door on his way out. 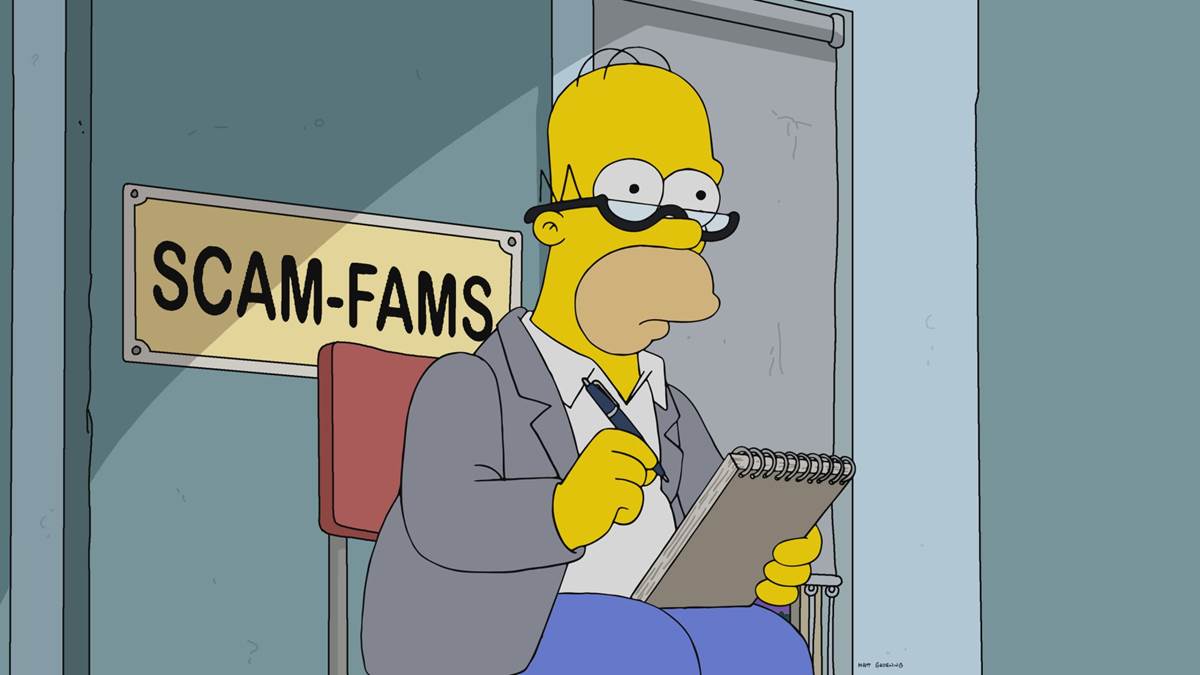 Back home, Marge scolds Homer for talking to Grandpa like that and Homer brags that he could never get scammed so easily. Bart and Lisa both share their experience with scams and Marge says she’s optimistic that people are mostly good, but Homer disagrees. The doorbell rings and Homer has received a delivery of boxes from Cutlife Knives, which Homer says is “The future of cutlery.” He brings them to the garage, which is full of identical boxes. Lisa tells him it’s a pyramid scheme. “Scheme? No way. They didn’t even want to let me join, but luckily at the last minute a space opened up.” Lisa holds up her phone with a news story about the company’s founder being arrested after Homer draws a chart about how the system works, creating a pyramid. In dismay, Homer pushes the boxes of knives to the driveway, but Marge stops him right before he sets them on fire. Marge convinces her husband to apologize to his father.

At the Springfield Retirement Castle, Homer apologizes to his father with the whole family around him. Abe’s phone rings and he responds “Yes, this is the grandparent of a boy or girl. Yes, put him or her on. (gasp) Lisa’s in jail!” Lisa encourages him to keep the other person on the line, recording the call while Grandpa prattles on his usual nonsense. Later, Lisa uses the 3-hours of recorded audio to pinpoint the exact location of the call, an office building between Raging Coasters and the Shelbyville Baptist Church. Bart is excited that they’re going to get the money back, but Marge tells him it’s not about the money but about showing someone the error of their ways. Home chimes in, saying “It is about the money” as he goes over to brush the dog, who he again sees as an Afghan Hound. 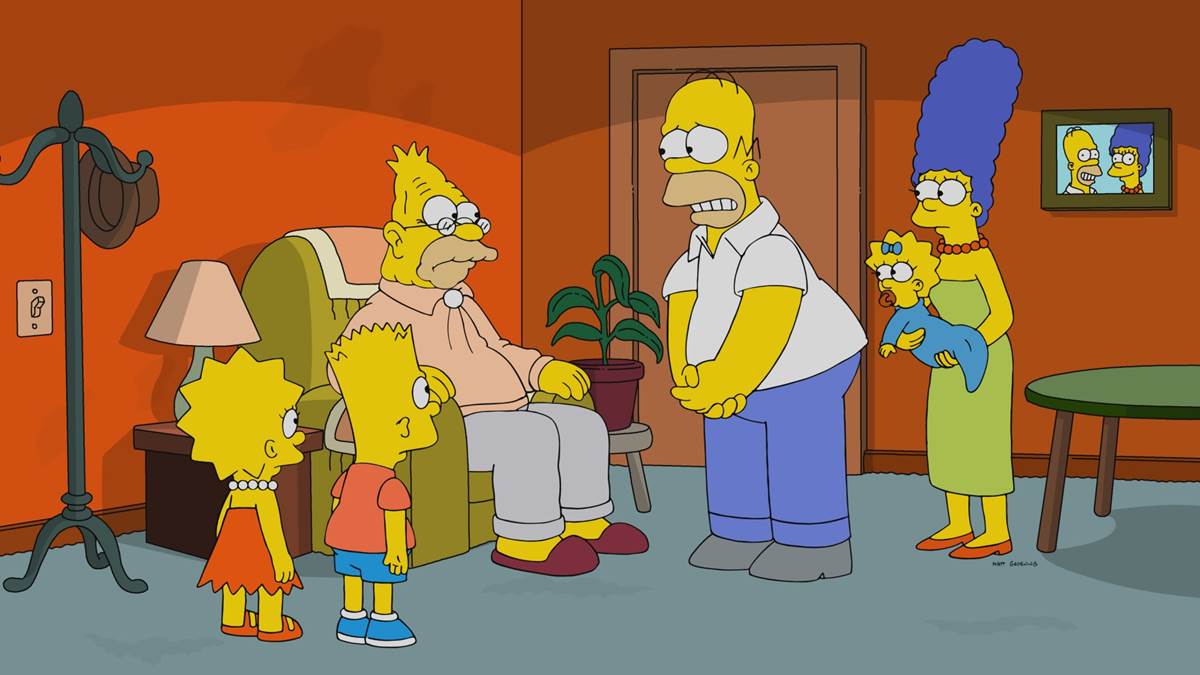 The Simpsons family arrives at building 1300 in Business Loop C, entering to find a security guard at a desk. Homer opens his jacket to reveal his knives strapped to his waist, saying “My friends can get us in.” We then see Homer go to work as a salesman, convincing the guard to join his Cutlife team and quit his security job. Rushing into the office, we see a floor of cubicles and Moe is hard at work scamming people. Lisa announces that they’ve called the authorities. Moments later, Chief Wiggum (Hank Azaria) rushes in huffing and puffing, yelling “Alright scam bags, you know the drill. You don’t gotta go home but you can’t grift here.” Marge is shocked that none of the scammers are being arrested and Wiggum tells her that no matter what, more scammers will take their place. As the employees exit, one grumbles about how they were only paid in gift cards and we hear a voice that sounds just like Bart from one of them. Lisa asks her mom if she can find the good in this situation and Marge snaps, kicking over a filing cabinet. The drawers fly open and gift cards spill out. “Justice wasn’t served, but dinner is,” Homer announces.

The family has indulged in $500 worth of food at “‘Zerz: America’s All-Appetizer Restaurant.” Marge is the only one who didn’t partake, but Homer guilt trips her into it by offering up a fried beak. The whole family chants “Eat the beak” (even Lisa, who is a vegetarian) and Marge buckles. But as soon as she takes a bite, their server turns into Loki, the god of mischief (not the Marvel character, voiced by Alan Cumming). “I am known by many names and take many forms,” he says, pointing to a booth of characters that include Jesus Christ, the African folklore spider Anansi, Sun Wukong the Chinese Monkey King, and Bill Cypher (voiced by Gravity Falls creator Alex Hirsch), who says “Buy crypto, suckers!” Marge asks Loki what he wants and he says he came to take away Marge’s unwavering hope. His business done, he prepares to take his leave. “Now to go add more blockout dates to Disneyland annual passes.” Loki transforms into Mickey Mouse and as he walks out the door, he says “Suckers” in a squeaky voice. On the drive home, Marge refills the family car at a gas station where a woman approaches Superintendant Chalmers (Hank Azaria) saying she left her purse at home and needs $20 for gas, which she promises to mail back to him. “I’m sorry, but that is an obvious scam,” he says. “Go find another sucker.” Marge believes this is a test of her faith in humanity and she pulls out $20 for the woman, writing down her address. “I trust that you’ll mail me the money,” she says. One week later, Marge sifts through the mail and receives a letter that’s not a bill. Inside is a $20 bill and a note that reads “Thank you for your trust.” The whole family seems to be uplifted.

Outside the window, we see that Abe Simpson is the one who sent it, the other woman was indeed running a scam. “Well, I’m out $20, but I gave them something to believe in,” he says as he walks away, adding “Suckers.”

The Simpsons will return on Sunday, October 10th at 8/7c on FOX for “Treehouse Of Horror XXXII,” with special guest star Tree Rollins. Segments include a parody of Bong Joon-ho’s Parasite and what can only be described as “Bambi’s revenge.” We will, of course, provide an in-depth recap.