We’re only into the third episode of season 30 and I’m not sure this week’s theme is possible to beat because… IT’S BRITNEY NIGHT and I get to take over the DWTS recap from here on out. Isn’t she lucky? That Laughing Place blogger. That’s how the song goes, right? Anyways, this week’s ep opens up with the Stars delivering completely unscripted Britney references and a grand entrance from Tyra serving the iconic “Baby One More Time” School Girl get-up. Tonight’s episode is dedicated in celebration of the living-legend Britney Spears because like Tyra said, “Miss Spears, we love you!” So without further adieu, let’s get into it! 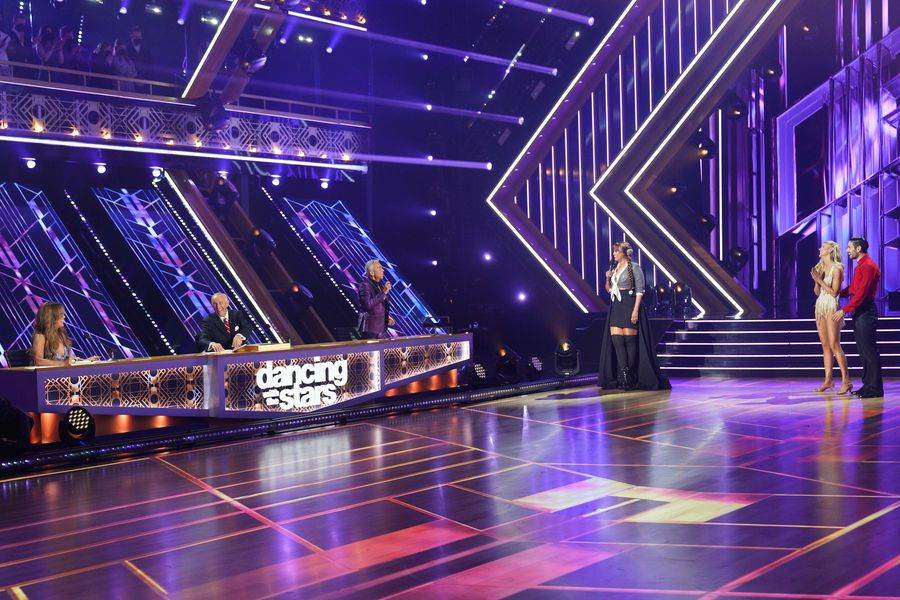 Note: Due to a potential COVID exposure, although completely vaccinated and testing negative, Derek Hough did not attend tonight’s show out of an abundance of caution. That being said, the judges’ scores below only represent those of the original three; Carrie Ann Inaba, Len Goodman, and Bruno Tonioli.

Amanda Kloots & Alan – Cha-Cha – Amanda’s ”a put-on-a-show kind of girl” so of course, she nailed this “Circus” number. With her first Latin American dance under her belt, Amanda should feel really proud of this clean performance. Although I gotta be honest, like Len, I found myself a bit bored with this number and I really think she’s in need of a challenge. Hey, Alan! Throw in some flips or something. With her Broadway background, she should have no problem taking these notes and rising to the challenge next week. Judges Scores: 8 – 8 – 8

Iman Shumpert & Daniella – Tango – I may not know sports (beyond ballroom), but Iman should know Britney. End of story. While his posture could still use some work, Len commended him for putting his heart into it. Pro-tip: When you have a pro-athlete as your partner, choreograph him sliding you around on the floor for two counts of eight. It helps. I lived watching Iman saunter around in his suede purple blazer and it seems like the judges were on the same page. Judges Score: 7 – 6 – 6

Christine Chiu & Pasha – Paso Doble – After a week in the bottom two, Christine knows she needs to be “Stronger.” From the start, this pair’s chair work alone tells me that she’s making it happen. With the intense paso doble, Christine’s movement is full of passion and empowerment. The judges were definitely glad she remained in the competition because their feedback was all really positive. Christine fully embraced the theme of the week as she expressed, “Just like Britney, you rise above and keep moving forward,” which is now officially my mantra for the week. Judges Scores:  7 – 7 – 7

JoJo Siwa & Jenna – Argentine Tango – So I think it’s safe to say JoJo and Jenna are getting the first pick of songs and… maybe even outfits? This duo dominates “Hit Me Baby One More Time” with a fiery tango. Perhaps more than any other number before, we’re reminded just how STRONG JoJo is. The series of lifts into the final Britney beat brought me to my feet. Bruno mentioned, JoJo may have missed a step, but does it matter? JoJo and Jenna are still the frontrunners for me. Judges Scores:  8 – 8 – 8

Kenya Moore & Brandon – Tango – While the yellow costumes were tough to watch, Former Miss USA, Kenya Moore glided across the DWTS stage in this “Womanizer” number. From the start, Kenya seemed more confident in her abilities and it made a difference in her overall performance. I noticed there was a bit of stability missing from this routine and Len noted their hold wasn’t tight enough at times, but it was a clear improvement from last week. Even so, I couldn’t help but get distracted thinking about my newest crush, Brandon! Judges Scores: 7 – 7 – 7

Brian Austin Green & Sharna – Tango – Let Sharna Say “Tango” Over and Over Again Challenge! It’s raining, it’s pouring, and boy oh boy, I found this number boring. Every week I will be shocked they are still together because Brian just lacks the steps and that would frustrate me beyond belief! But anyways, so happy for them! Carrie Ann was too nice if you ask me, but Len called it a “spirited effort” which tells you everything you need to know. Judges Scores: 7 – 6 – 6

Melora Hardin & Artem – Cha-Cha – I need someone to deliver a hug to Melora so she never cries on this show again. Despite feeling a bit “Crazy” in rehearsals, Melora was such a joy to watch and brought it to the ballroom. I was really impressed by this number and her fluid hip movement. I really hope Artem and Melora can make their rehearsal space a bit more comfortable for one another so we can avoid any more tears from Melora in the future. Let her dance and let her be happy! Judges Scores: 8 – 7 – 8

Melanie C & Gleb – Tango – Melanie & Gleb danced to “Toxic,” so they already won! Backed up by two other “flight attendancers,” Mel started off strong with that food cart. Shortly after, Gleb strutted out in a sky-like suit which, I must admit, made me chuckle. Out of all the expressions tonight, Mel is giving some versatility and selling the tension. This flight attendant/sky tango was a bit of a trip, but as Bruno said, it was a “very impressive cockpit.”  Judges Scores: 7 – 7 – 8

Jimmie Allen & Emma – Salsa – I shouldn’t be surprised that “Outrageous” would be my favorite stage look tonight, but I am still surprised that I loved this number as much as I did. Carrie Ann, went iiiiin on this critique and dragged Jimmie for shaky lifts and Len said nothing much more positive. Thankfully, Bruno declared “the other judges must be watching a different show” and validated my enjoyment. Be nice to Jimmie, ya’ll! That was fun. Judges Score: 6 – 6 – 8

Olivia Jade & Val – Tango – Can we just admit we’re all some of Britney’s biggest fans? I don’t think Olivia Jade or anyone else is special for saying that, but I digress! We have to give credit where credit is due… Olivia is good and delivered quite the elegant tango. Bruno noted that this is a transformative moment for Olivia and I cannot argue with that after this solid performance. Happy birthday, Olivia! Judges Scores: 8 – 8 – 8

Cody Rigsby & Cheryl – Jazz – After both testing positive for COVID-19 within the last two weeks, the pair made history as they performed live and remotely from their individual homes. Luckily, as a Peloton instructor, Cody is used to virtually performing to his fave Britney, so I had the utmost faith he’d rise to the occasion. Cody and Cheryl brought Fosse/Britney to the Zoom stage and they did the best they could with the difficult assignment. As Carrie Ann mentioned, the videos really couldn’t be representative of the ballroom stage, but the judges must continue to critique them at the same standard. True, but they do have COVID, so I think we could have given them a bit of a break. Judges Scores: 6 – 6 – 6 (Tough in my opinion!)

Suni Lee & Sasha – Foxtrot – I feel like I’ve been waiting a lifetime for Suni this week. I need her earlier in the lineup. Looking like an absolute star, Suni Lee gets saucy. Accompanied by an interesting version of “Slave 4 U,” Suni Lee looks a little bit timid with this foxtrot. Before I could form any more opinions Bruno commented, “a little moisture makes you glow,” and I got a bit confused about what show I was watching. Judges Scores: 7 – 7- 7

Matt James & Lindsay – Tango – There’s something beautiful about watching a commercial featuring Matt James’ ex-girlfriend prior to his performance. Although he dedicates the dance to his mom and puts his shirt back on, the entire stage was covered in shirtless pictures of himself. Weird choice, but okay. Matt couldn’t wipe his concentration face off, but his improvement shows he’s got both of his eyes on the prize. (Get it? Because he kisses with eyes open? No? I’ll see myself out.) Judges Scores: 7 – 6 – 7

The Miz & Witney – Salsa – Have I ever wanted to see a WWE star dance to a Britney song, Tyra? Not really. But, we got The Miz salsaing to “Oops!… I Did It Again” anyway! All jokes aside, I liked seeing The Miz step up his footwork game this week and Witney looked amazing in the red-latex look! Bruno loved his open shirt, Carrie Ann said he was fun, but tight, and Len  saluted his improvement! Judges Scores: 7 – 7 – 8

The bottom two are revealed to be Kenya and Brandon and Christine and Pasha. I’m not too thrilled with either of these pairs in the bottom, but I guess that’s what makes this show so tricky. Someone has to go! And this week, it was unfortunately Christine and Pasha – to both me and Len’s dismay. For the time ever, next week will be a special two-night Disney event! On Monday, the couples will celebrate Disney Heroes, while Tuesday will, naturally, be all about Disney Villains. Oh, boy! This is music to my Ear-idescent 50th ears! See you real soon!