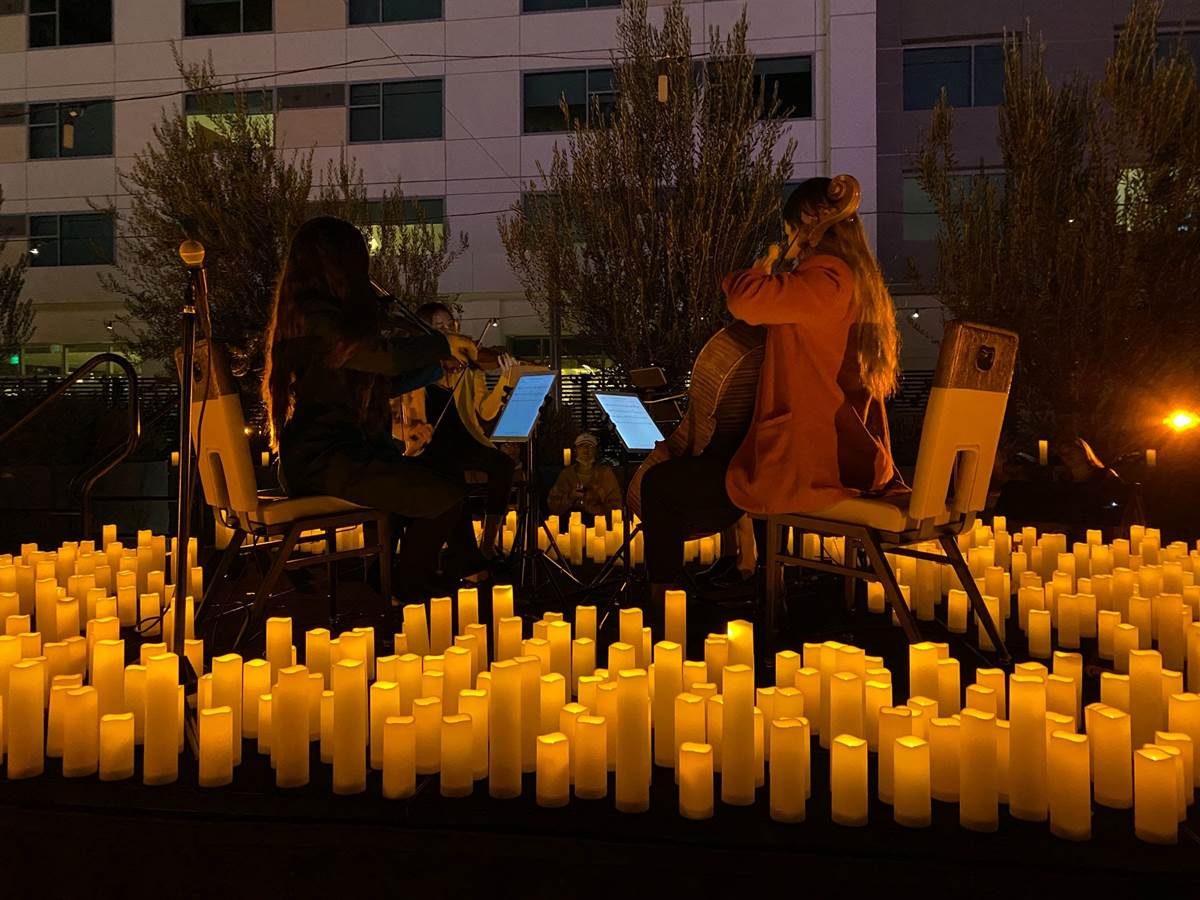 For several years now, the Los Angeles-based Orchid Quartet has been steadily growing a reputation as one of the must-see acts performing accessible string music around the world. And lately they’ve been bringing their sizable talents to the perimeter of the Happiest Place On Earth via a regular “Songs from Magical Movie Soundtracks” concert on the open-air patio of Anaheim’s JW Marriott hotel, just around the corner from the Disneyland Resort.

I had the pleasure of attending the “Magical Movie Soundtracks” performance this Tuesday, and I was left ready to recommend fellow pop-culture-loving friends check out this Disney-themed show, not to mention Orchid Quartet’s other upcoming Candlelight Concerts.

“When You Wish Upon a Star” performed by @OrchidQuartet at #Candlelight Concert in Anaheim. pic.twitter.com/VXveVOIYWf

Bathed in the glow of over a thousand candles spread out on the stage and floor around them, the four incredibly talented members of Orchid Quartet opened their “Songs from Magical Movie Soundtracks” set with “When You Wish Upon a Star” from Walt Disney’s animated classic Pinocchio, then launched into tunes from Cinderella, The Little Mermaid, Frozen, Beauty and the Beast, and the treasured love ballad “A Whole New World” from Aladdin.

Though the first half of their set was dedicated to the music of Walt Disney Animation Studios, after that the Orchid Quarter brought down the house with a Pixar medley (consisting of melodies from Inside Out, Toy Story, Monsters Inc., Up, The Incredibles, and Coco) followed by Hans Zimmer and Klaus Badelt’s rousing theme from the Pirates of the Caribbean film franchise, then Ludwig Göransson’s Oscar-winning main title score from Marvel Studios’ mega-hit movie Black Panther. But speaking of Göransson, as a Star Wars fanatic what I was most thrilled to hear from the group was their rendition of The Mandalorian’s end-credits theme. They also closed out the show with a performance of John Williams’s original Star Wars work, but having heard that live so many times before, it was The Mandalorian that really stood out for me. Overall, I would absolutely recommend this hour-long concert to fans of Disney, Pixar, Marvel, and Star Wars music.

Watch "The Mandalorian" theme performed by Orchid Quarter at Candlelight Concert in Anaheim:

For more information on Fever’s Candlelight Concert series and to purchase tickets to upcoming shows, be sure to visit the official FeverUp website, and for other future Orchid Quartet concerts, check out the group’s official website.