While Anne is helping get the Plantars more accustomed to life and the dangers of Earth, Sasha and Grimes take up residence in Wartwood in the latest episode of Amphibia. 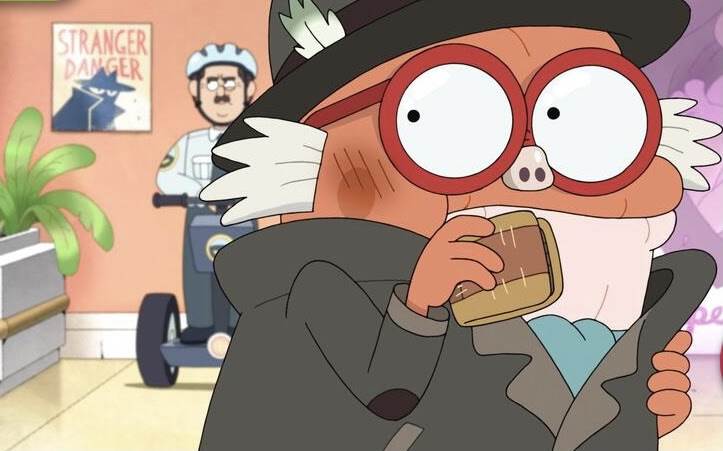 Hop ‘Til You Drop

Anne is heading out to the mailbox, and the Plantars want to join her even though it’s just a short walk away. But in that short time, Polly gets in a fight with other kids, Sprig almost goes head first into a woodchipper, and Hop Pop almost gets suckered into a timeshare scam.

After she saves everyone from their trouble, she goes back inside and vents to her mom and dad who say her plight sounds just like parenting.

Anne decides to take a trial-by-fire approach to getting the Plantars acclimated to the human world and takes them to the most dangerous place she can think of…the shopping mall. There, she gives each of the Plantars a challenge to complete, and if they don’t they can never leave the house again…EVER. Polly must head to the “Create-A-Carnivore” plush building store and successfully build a toy with other children without getting into a fight. Sprig, who loves exploring the different textures and materials of Earth, must go through an art gallery without touching anything, and Hop Pop must go down Kiosk Alley without getting suckered into taking anything for free.

Everything seems to be going smoothly until a classmate of Anne’s finds her and starts catching her up on the gossip that she missed while she was “visiting family in Alaska.” While her back is turned, Sprig manages to destroy an art piece full of cranks and knobs and is sent barrelling through the mall, Polly reaches her breaking point and starts a fight with a bunch of babies who destroyed her plush creation, and Hop Pop goes diving into a chlorinated-fountain to round up all the free coppers (coins) in it after being pursued by mall security.

Anne breaks free of her classmate’s gossip, and rounds up Sprig and Polly and redisguises them so they can get out of the way, and set the mall security guard on the angry baby moms, allowing a newly-green (thanks to the chlorine of the fountain) Hop Pop to get away.

The Plantars apologize to Anne, but Anne turns around and apologizes to them, saying that she shouldn’t have thrown them in the deep end like she dealt with in Amphibia. The Plantars start laughing and we see quick clips of moments where they were looking out for Anne without her even knowing it to make sure she is protected and safe.

For the first time this season, we go back to Amphibia and see the last moments of Season 2, when Anne was zapped back to Earth, Marcy was almost killed (still currently in a rejuvenation tank), and Sasha and Grimes went into hiding. This portion of the episode focuses solely on these two, as they head back to Wartwood to lay low and take up residence in the newly abandoned home of the Plantars. Grimes takes up residence in Hop Pop’s room, but Sasha, overwhelmed with guilt, can’t even enter the home and decides to stay in the barn.

When the two arrived in Wartwood, they told the townspeople that Anne had sent them there to protect them from King Andrias and his army, so the next morning, local townsfolk kept stopping by bringing gifts and food to thank them for staying in town and working with Anne, definitely not helping the guilt that Sasha is feeling.

Thinking it's another neighbor, one of the King’s robots arrives on scene tracking the two, and calls out for reinforcements before Sasha and Grime are able to destroy it. The two must now move on, as a robot army will arrive and surely destroy Wartwood, and Grimes tells her whatever she is dealing with, she needs to face it, and move on. Grimes decides to leave and join Beatrix, and Sasha can catch up when she’s ready.

Sasha musters up the courage to go inside the house and finds Anne’s room, where she reads an entry in her journal saying how happy she is that she started trusting Sasha again, and the three girls were back together ready to go home.

Sasha sheds tears all over the journal and heads into town and tells the locals that she wasn’t sent by Anne, because Anne was sent somewhere through the music box. The locals are all shocked, but that could also be because of the robot militia that has arrived on scene. Sasha attempts to take it down, but is overwhelmed and just as we think all is lost, Grimes arrives and helps, saying Beatrix may have a lot of things, but she doesn’t have Sasha, and begins to fight alongside her. As more of the robot army comes forward, the pair realizes it's 30 against 2 when the townspeople start fighting alongside them as well.

Grimes is surprised by the skill of the townspeople, even remarking that they are better than any soldier he’s ever seen. They take out the robot army, and Sasha asks why they helped, even though she lied. They group came together and explained that she told the truth even though she didn’t have to, and was ready to protect them all on her own on behalf of Anne.

It looks like, at least for now, Sasha and Grimes are in Wartwood to stay.

The latest episode of Amphibia is now available on Disney Channel and the DisneyNOW app. You can also catch up on the previous seasons on Disney+.