The Plantars are welcomed to the Boonchuy house as family…complete with all the chores and responsibilities that come with the title in this week’s episode of Amphibia. 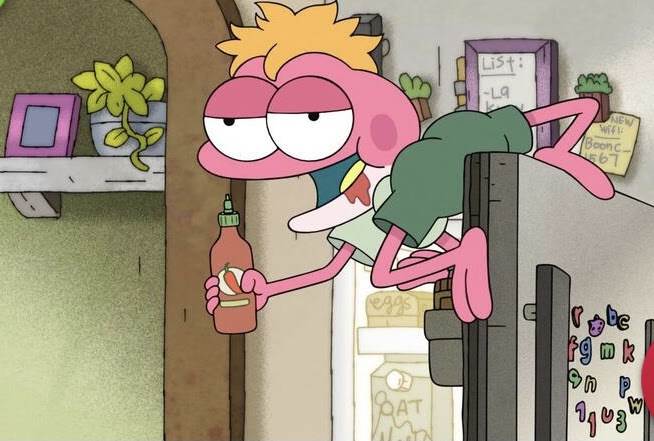 Sprig is walking around the Boonchuy’s house, treating it like he owns the place while Hop Pop and Polly still recognize that they are guests in their new home. Hop Pop and Polly remind Sprig that they aren’t part of Anne’s family, and that’s where this episode takes flight. Now, Sprig wants to help out around the house with chores and sees the opportunity to pitch in when the family heads to work at the restaurant, where he is sent to a corner to sip Thai tea.

While there, Anne introduces Sprig to Ned, the family’s most loyal customer of their restaurant, Thai Go. Turns out, Ned has started a new food truck and wants to partner with Mrs. Boonchuy and bring her great recipes to all of Los Angeles with his new truck that he keeps parked outside, “Thai on the Go.”

Mrs. Boonchuy points out to Anne that the title and placement of his truck right outside actually hurts the business since people and potential customers are confused.

Sprig sees this is an opportunity to help business, and tries to concoct a scheme to get Ned to move his truck, starting by ordering food and ripping his coat/disguise off saying that Ned’s food turned him pink. Of course, LA residents and acting-wannabes think this is a good thing, and rush the truck to order what Sprig ate.

Anne tells Sprig to stay out of it, but he writes a fake note saying Mrs. Boonchuy wants to talk business and gets him to leave the truck where Sprig attempts to sabotage the vehicle. Anne catches him mid-act and the two begin fighting in the middle of the truck, accidentally knocking it into gear and taking off through the streets of Los Angeles…which are about as hilly as the streets of San Francisco according to Amphibia.

Ned goes to talk to Mrs. Boonchuy per the note when she realizes that the tiny frog wrote it. By the time Anne and Sprig get the truck to stop via conveniently placed skate park, Ned and Mrs. Boonchuy arrive on scene, where Sprig takes full responsibility because he wanted to help and be part of the family.

Mrs. Boonchuy apologizes and says that she shouldn’t have made him feel like an outsider, and then starts yelling at him for putting himself and Anne in danger (among other things) and it’s official, Sprig is now part of the family.

Ned starts crying saying the same thing and echoing the sentiment that he too feels like an outsider, and Mrs. Boonchuy offers him a job running deliveries in lieu of getting the family recipes.

Mrs. Boonchuy is taking Anne to the dentist (since she has been gone for so long and likely wasn’t brushing) but this also conflicts with an appointment at the vet that Anne had set up for her cat, Domino. Mr. Boonchuy can’t take the cat, so the Plantars, feeling like freeloaders, offer to help by taking Domino to the vet.

So, the Plantars try and round up the cat and get her into a travel case, which proves to be more difficult than they originally thought. The group puts on their disguises and ventures forth to take her to the vet with the help of a few tools from the Boonchuys, like a cell phone. They watch the local humans take the bus and follow the same actions they observe and climb aboard, but when the bus takes off, Hop Pop tries to latch on to something by shooting his tongue but ends up essentially licking everyone on board, getting the group kicked off the bus.

Their quest continues and they finally end up at the vet's office, full of suspecting animals barking and hissing at them while they are disguised. Sprig also notices someone’s pet frog and has a brief moment of connection with his brethren.

Domino is seen, but the Vet himself is bombarded with questions from the Plantars about back pain and frogs and their abilities, puzzling the doctor. As they leave, Domino unlatches her travel carrier and sneaks away, inevitably causing the frog family to panic to a point where Sprig (much to Hop Pop’s chagrin) calls Mr. Boonchuy and tells him they lost the cat.

Clearly this has happened before, because “Mr. B” knows that Domino loves shawarma and will likely be found at whatever the closest shawarma stand is. Sure enough, that’s where they find her, to the delight of all the customers inside, where the owner of the restaurant says aloud that the cat is a customer magnet and he’s never getting rid of her. The family sees a smoke detector inside the restaurant (which they had a run-in with at the house earlier in the day) and Hop Pop replicates the high pitched alarm, evacuating the restaurant. Polly rolls around, pretending to be a ball of yarn to entice the cat back into her travel carrier, and as the fire department approaches, so does Mr. Boonchuy, who says he’ll drop the group back at home on his way to the restaurant.

Hop Pop feels bad that he has to go out of his way again for the Plantars, calling himself a freeloader. Mr. Boonchuy stops the scooter and says that he took in his daughter when she was most in need, and kept her safe and fed for five months. He will never be a freeloader.

They get back home and Anne and her Mom show back up, with Anne clearly under the influence of some pretty strong dentist medication. This episode seems like a fun little romp with the Plantars in the Human world of Earth until Anne says one very highly-medicated line, saying that Domino is the alpha and omega, the key to connecting dimensions and other worlds. Considering that every episode so far this season references Anne trying to find another way back to Amphibia other than the music box in some way, this could be the revelation.

This episode of Amphibia is now available on Disney Channel and the DisneyNOW App. You can also catch up with the past seasons on Disney+.