The world's smartest and bravest twin brothers are back for another hilarious and death-defying adventure in The Fowl Twins Get What They Deserve. Author Eoin Colfer dazzles fans with humor, adventure, ghosts, clones, and a supernatural battle royal that will entertain all readers. It’s time for Myles and Beckett Fowl to deal with their arch enemy Lord Teddy Bleedham-Drye once and for all. The younger brothers of Artemis Fowl have proven on multiple occasions that they don’t need their older brother to have a wild adventure. 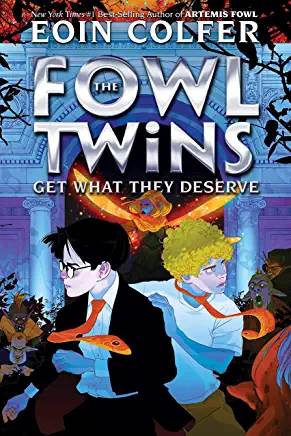 While Myles Fowl is world renown for his intelligence, his brother Beckett is the warrior of the group who can talk to animals, be incredibly smart when he chooses to be, as well as act silly. Following on the heels of the Artemis Fowl saga, Eoin Colfer has done the impossible by revisiting a familiar world, but somehow made the world anew for readers. The scenery is familiar, and the name rings a bell, but everything about The Fowl Twins stands on their own.

In The Fowl Twins Get What They Deserve readers are once again placed in a familiar world with a whole new outlook. Much like Myles’ unexpected communication with ghosts, readers are gifted with two characters that are far from a copy of their genius older brother. Add in fairy ambassador Specialist Lazuli Heitz of the LEPrecon Force, and readers won’t see a retread of well-travelled roads.

Lord Teddy Bleedham-Drye, Duke of Scilly, has had it with the Fowl Twins, in particular Myles Fowl. Myles has thwarted Lord Teddy multiple times in the previous two books, and now the murderous Duke is out for revenge. Colfer should be given an award for devising one of the funniest villain names in literature.

In this third book in the series, we see a relentless and aggrieved Lord Teddy pursue the Fowl Twins with the plan of eliminating the threat they pose to his ability to live forever. Concocting a fiendish plan using multiple clones of himself, Lord Teddy is on the cusp of winning, but falls victim to being of lesser intelligence to the Fowl boys.

The LEPrecon ambassador, Specialist Lazuli Heitz is an interesting character because in many ways she is the opposite of what we would expect from the fairy people. Placed into the role of special envoy between the Fowl Twins and the fairy people, Lazuli is less of a LEP officer trained to restrain the Fowl’s from instigating any devious schemes, and more like a sister to the wayward brilliant brothers.

It wouldn’t be a Fowl story if there wasn’t supernatural wonder, some fairy magic, and impossible modes of travel. Colfer winds the story tight with beyond real fantastical battles, and a grotesque plan to remove a brain from one’s body and transfer the essence of a person to another body.

While our heroes no doubt reign supreme as the last page is turned in the book, Colfer has not only continued the joy of the previous books he enables his characters to grow in their maturity. The relationship between Myles and Beckett is close, but throughout ‘The Fowl Twins’ series readers have been able to laugh along at the bickering banter of two boys as they both chart very different paths in life. Though they may veer in different directions, their love for each other is supreme, and the touching moments of brotherhood near the concluding battle not only show two brothers who love each other, but also two brilliant though different minds. For all the unreal situations that the Fowl’s get themselves into, the brotherly moments ground this fantastical story.

Readers of Colfer’s previous Fowl books will no doubt guess how the story will resolve, but the joy of The Fowl Twins Get What They Deserve is not in being shocked with rapid changes in narrative, it’s the fun of escaping into an adventure that no human would be able to have, except through the lyrical tale of the talented Mr. Eoin Colfer.

Reading is meant to be an escape, something we should all do for fun. This middle grade novel is not only an excellent addition to a library of Fowl tales but stands out because this is a grand adventure that all readers will enjoy. Sometimes books are meant to be a joy, not a life changing moment. The thrill of reading is alive and well with The Fowl Twins Get What They Deserve.

As the title suggests, Myles and Beckett Fowl certainly get what they deserve, and readers young and old will rejoice as they are lost in the schemes of the Fowl Twins. How do the boys escape from harm and defeat Lord Teddy? For that answer you will need to read this book.

The Fowl Twins Get What They Deserve wraps up the story of Myles and Beckett while leaving room for more adventures should Colfer wish to come back to the magical world once more.

The Fowl Twins Get What They Deserve gets four golden fairy wings out of four, for making this reader laugh, and lament for the days of being a kid when magic was around every corner.