Anne and the Plantars keep inching closer to finding a way back to their home in this week’s Amphibia, but that pesky robot keeps getting in the way! 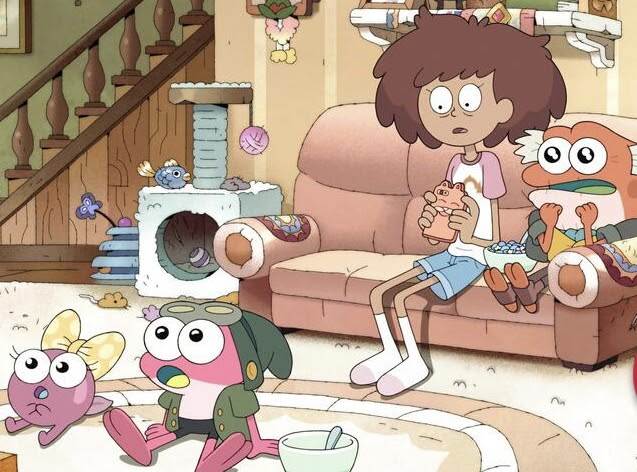 Fight at the Museum

Anne has been staying up all night the last few nights researching different ways to get back to Amphibia, when Hop Pop suggests she take a break. The Plantars seem to be enjoying their time on Earth, binging different shows and learning more about the people of this new world. Mrs. Boonchuy tells Anne that she should be doing reports to catch up on the school work she missed, and sends the group to the museum for the day.

While they are at the museum, they come across a piece of pottery that features frogs and symbols, but more importantly, the calamity/music box. As they are discussing the piece, trying to figure out a way to get a closer look at it, the museum’s curator, Dr. Jan (guest star Anika Noni Rose) pops up to talk about frogs. While ranting, she also mentions that she often thinks about fringe things like UFOs, alternate dimensions, and alien beings, as well as a background studying bipedal frogs, thinking there’s more to them than meets the eye.

Hop Pop suggests just asking her to see the pottery to look closer at it, but Anne is hesitant to trust anybody else with their secret, even if they seem to know all about it already. So what do they do? They plan a heist!

Elsewhere in the city, the robot that King Andrias sent to take out Anne and the Plantars has been tapping into cell phone and security camera networks to track the group. When they break into the museum and Sprig is on the footage taking out the cameras, the robot sees this happening and now knows exactly where they are.

Hop Pop distracts some security guards as a “fabulous cat” and gets them into a coffee shop to buy time, while Polly gets through a series of security alarms and laser traps fairly easily. Of course, things get more challenging than they have been when the robot comes crashing through the roof to take on the group setting off all the alarms. The gang works together against the robot, inevitably collapsing a giant fossil on top of it when Dr. Jan and the guards come in. Dr. Jan recognizes the Plantars for what they are immediately, bipedal frogs likely from another dimension, and ushers the guards away, calling the whole situation a misunderstanding.

She then tells Anne that if she wanted help, why didn’t she just ask for it? The group explains everything, filling Dr. Jan in on the whole story while they examine the pottery. Anne even suggests taking it under a blacklight looking for code on it, when Dr. Jan suggests a deal: That if she goes home and gets some sleep, she’ll help her figure out how to get everyone back to Amphibia.

Later on in her office alone, Dr. Jan is studying the pottery when she says aloud, “I Wonder,” and turns off the lights and takes a blacklight to the pottery, discovering a code just like Anne suggested.

Dr. Jan wants to see Anne to discuss what she has found on the pottery, but Anne and the Plantars can’t get to see her right away because Mrs. Boonchuy has intercepted the group to attend the Thai Temple festival. Mrs. Boonchuy insists that Anne goes because the community, which their family is very involved in, has not seen Anne since she has returned and strikes a deal. If Anne can stay for a full hour, then she can run off to meet Dr. Jan.

The group goes to the festival, and Anne’s mom makes her hand out samples of food while she returns all kinds of dishware to the different families in the community. Anne is struggling though, and wants to go see Dr. Jan.

Meanwhile, the Plantars have found ways to keep themselves occupied. Polly is in Thai language lessons and stunning everyone with how fluent she has become from watching Thai Rom Coms with Mrs. Boonchuy. Sprig has managed to find himself on the soccer court with his jumping and kicking skills, and Hop Pop has taken to the dramatic arts of Thai theater.

The robot is still in the city, but while he decides to recover and recharge, he sends out a fleet of drones to find and attack Anne, who has now bribed someone who looks like her to pass out samples so she can go find Dr. Jan. While she is making her escape, she actually runs into her mom with more flatware, who is disappointed she couldn’t last a full hour at the Thai Temple. Mom goes on to explain that all these dishes she’s returning are from concerned families in the community who made them food and meals and shared their concern for Anne while she was missing.

As Anne is concluding her day at the festival, staying longer than she expected and realizing how tight the community actually is, the drones find her and the Plantars, and attack. The entire community (who in fairness, think they are cameras from the school newspaper paparazzi) attack and bring down the drones when we realize that the fight was so intense that the disguises that the Plantars wear were completely knocked off.

The Planters are now fully revealed to the Thai Temple community, but nobody seems to care who or what they are since they are friends of the Boonchuys.

Dr. Jan arrives on scene after a day of waiting for Anne to share her findings, and thanks to Marcy’s journal that Anne has in her possession, they were able to translate the message Dr. Jan found: “Seek the Mother of Olms she will guide you to your destiny”

Too bad nobody knows what that means.

This episode of Amphibia is now available on Disney Channel and the DisneyNOW App. You can also catch up with earlier seasons of the series, now streaming on Disney+.