Rick Riordan’s first entry into science fiction is a stunning achievement. Daughter of the Deep will be the book that middle graders will look back on and say this is the book that got me excited about science fiction. Riordan is a huge fan of Jules Verne and his books 20,000 Leagues Under the Sea and The Mysterious Island. His latest epic Daughter of the Deep is impossible to put down and will send readers in search of the classic tales by Jules Verne. Set in the modern day, the connection to Verne and his masterful world, including Captain Nemo and the submarine Nautilus, will play a decisive role in the survival of protagonist Ana Dakkar. 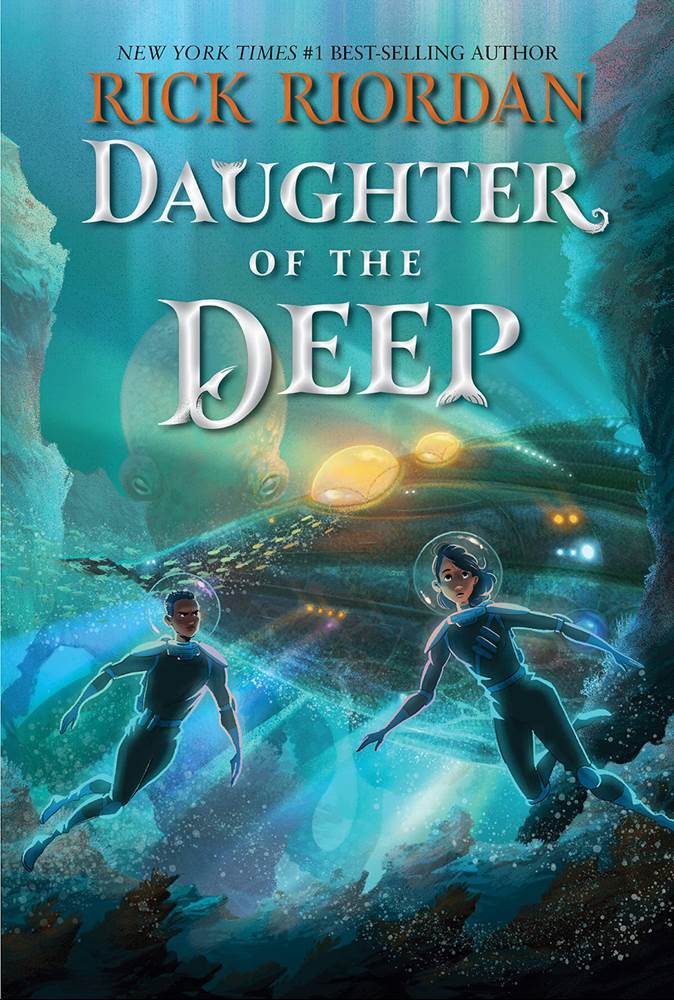 Ana Dakkar is a freshman at the prestigious private school Harding-Pencroft (HP) Academy. Billed as one of the best private schools, renowned for training future marine scientists and future naval combat officers, HP is the perfect place for Ana. The future will be a world of opportunities for Ana if she can avoid failing out before graduation. Orphaned with her older brother Dev since the mysterious death of her parents, Ana hopes to learn the secrets of HP, which her brother as a senior student is privy to. Leaving the school for their freshmen class sea trials, everything Ana has known comes crumbling down.

With only a single teacher, Professor Hewett, the students board the yacht, and fear their rivals from the Land Institute have become a hostile force, and not just crosstown rivals at high school sports. Afraid of the future and fearing an attack from the Land Institute, Professor Hewett has no choice but to tell Ana of her family lineage. The fifteen-year-old is shocked to learn that it is not just a coincidence that her last name is the same as a famed Jules Verne character. As the fast-paced story unfolds, the fiction of Verne’s works proves to be more real than Ana or her classmates could believe. Thrust into the position of leadership after Professor Hewett collapses, Ana must reconcile what she has learned, work to keep her classmates safe, and unlock the possibility of what her new knowledge means.

Jules Verne has always been a fascinating author who has written some excellent books that can be dry reading. The characters in 20,000 Leagues Under the Sea and The Mysterious Island have been adapted countless times, including Disney’s live action take in the 1950’s. Having loved the Kirk Douglas/James Mason movie, as well as the 20,000 Leagues Under the Sea attraction at Walt Disney World, I was keenly interested in how Rick Riordan would write a middle grade book in this world and how he would make it interesting to sustain the reader from the first paragraph to the last.

To say that Riordan has not only confirmed his incredible literary power with Daughter of the Deep, is an understatement. He has taken a classic work with lengthy prose and slightly dry passages and made the world of Verne new. Of course, the fantastical world of Nemo, the Nautilus, and the battle to survive is what makes Verne’s original story so engrossing, but Daughter of the Deep is the rare follow up book that surpasses the original.

How does Riordan make his latest middle grade book so good? By creating a relatable protagonist that catches the reader’s attention from the first moment we meet her. Ana Dakkar is not your typical orphan who is failing at life. She’s brilliant, has friends, holds her sorrow in a certain part of her heart, but continues with her life. We empathize with Ana because we like her as our main character. This is the first time when Riordan has had a solo female protagonist, and with the talents of Riordan we meet a character that, regardless of age or gender, all readers will gravitate towards. Ana is the character that you would want to be friends with. She’s not the popular one, just a good person who is open minded and willing to change as she learns more about someone. The way her friendship with Gem Twain evolves from the introduction to the closing of the book is a perfect example of how open minded and loving Ana Dakkar is.

Her loyalty to her friends and the fact that Ana relies on her wits and intelligence to survive, with some help of technological marvels, is what helps Ana surpass characters like Percy Jackson. I love Percy Jackson but being endowed with god-like abilities gives a character a certain advantage. Ana Dakkar is a person, not a demigod. Ana is human, with human faults and frailties, and she has the unbelievable ability to show compassion and love for all, including for her enemies.

In this standalone novel, Riordan has craftily introduced an awesome set of characters, established a cult like set of villains that may or may not be villainous, and made a commentary on the exploitation of modern society. When Ana learns about the Nemo tech that she now has access to, the first question raised by the kids is why HP would keep this technology to themselves. Why not release the Nemo tech to the world. The discussion the HP students have about how big corporations or governments would take such technology and perhaps not use it for the best interest of the world is detailed and is a nice talking point in the story. Discussing corporate exploitation is not what I expected from this middle grade novel, and it makes perfect sense for the characters to be talking about it.

Daughter of the Deep will be a smashing success. Kids will embrace Ana Dakkar, and I suspect we will see a surge of interest in Jules Verne. I predict that not only will Riordan be on the best seller list for his latest work, but so will Verne thanks to Riordan.

Due to supply chain issues the release of Daughter of the Deep was delayed — but the book is available now and is worth the wait.