A fierce warrior must save the heart of her beloved prince before it’s too late. The results are gory and glorious as author Leigh Dragoon and story artist and illustrator Angela Devito take readers on an all-new journey in one of the latest graphic novels published by Disney-Hyperion. 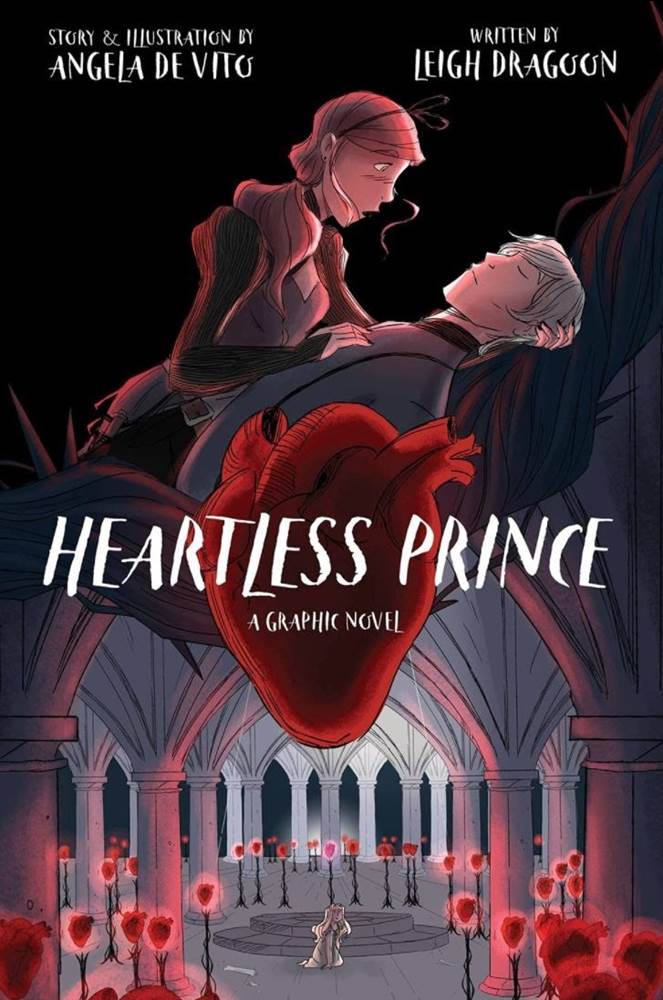 What is Heartless Prince about?

Heartless Prince is the first book in a new young adult fantasy-adventure graphic novel trilogy. Evony is an orphaned princess from a kingdom destroyed by a power-hungry witch. Prince Ammon is struck by her uncanny ability to sense when familiars―servants to the witches―are approaching his kingdom’s borders. While Evony has always longed for something more with Ammon, her feelings do not appear to be immediately reciprocated. Wanting to prove himself to his kingdom and parents, Ammon takes Evony outside the borders to fight the familiars head-to-head. However, the fearless duo is soon captured by Aradia, a mysterious and sinister witch who steals Ammon’s heart and abandons his body – leaving it to turn into one of her familiars. Meanwhile, Ammon’s young sister, Nissa, has been removed from the castle and taken hostage by Aradia’s daughter. Evony makes it her mission to retrieve Ammon’s heart and save Nissa with the help of Ymyr, a friendly and humorous Guard creature. Once in the Witchlands, Evony will discover a secret about her past that will change everything.

Rarely are spooky elements and humor so beautifully illustrated

This graphic novel is geared towards young adults which generally means readers aged from 12 to 18 years old. While it depends on the individual reader’s tolerance for reads of a scarier sort, there are certainly spooky elements to this tale. The most obvious of these is the removal of Ammon’s heart. If that turns your stomach, perhaps a hideaway full of hearts might be too much. Brace yourself. (Not-so spoiler alert because it appears on the cover: There is a hideaway full of hearts.) That said, Devito’s alluring illustrations perfectly temper the sinister themes, not least of all because the images are in black and white. There is also a great deal of humor in this book, courtesy of the banter between the prophet witch, Iona, and the Guard upon meeting Evony. The dialogue between these characters was the highlight of the story for me, followed closely by the story’s compelling themes.

Evony is a warrior – she is not a princess who waits. She does not wait for Ammon to love her and she certainly does not wait for anyone else to do the saving. Evony takes it upon herself and in doing so, discovers more than she bargained for. While her discovery is confronting and a little uncomfortable, it is necessary and part of her truth. This is critical not only to her development, but to the development of readers, young and old, and this theme was beautifully communicated in this story. Similarly impressive is Nissa who is resourceful in her own unique way. While she learns the hard lesson that you cannot always trust those closest to you, if you embrace your skillset, you might manage to get yourself out of a tricky situation.

Captivating cover art makes for the perfect prelude to this sinister, satisfying story

This review would not be complete without great praise for the cover of this graphic novel. The color is captivating (perhaps even more than it would otherwise be because no color appears in the illustrations inside the book) and the images strike an intriguing, dramatic chord. While the fighting, action and magic are largely left off the cover, they cannot be missed inside the pages. It was an interesting choice to promote the romance aspect of the story for this particular tale. Things are not always what they seem. The cover rouses questions which encourages readers to pick up this book. The biggest one I had was: what is with all the floating hearts?! I had to find out. And boy, am I glad I did.

The ending will hook readers

Finally, the ending will hook readers in an exciting, not-so happily ever after way. In doing this, readers will look forward to the upcoming books in the trilogy and hope that they incorporate an equally enticing level of spook, story, humor, action and strength of character that book one, Heartless Prince, does so well.