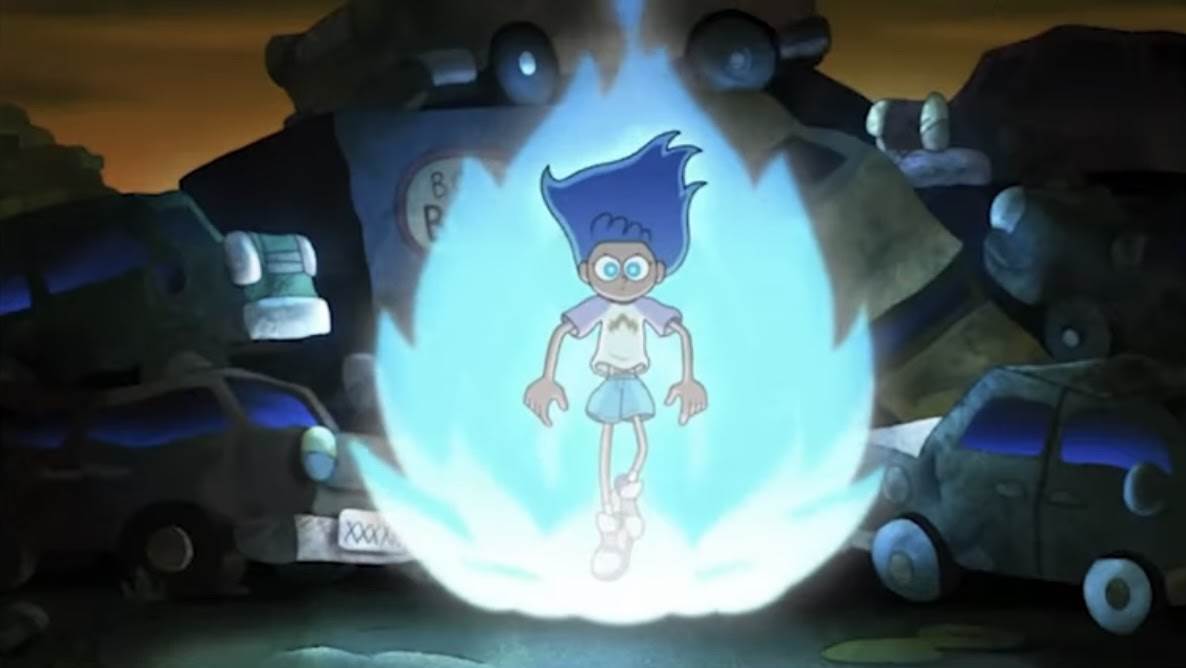 Anne, Sprig, and Hop Pop are browsing the endless expanse of knowledge that is the internet only to fall down a dark hole of cat videos. Polly interrupts and shares that she has fixed Frobo, the frog robot that Polly befriended in season 2 that was destroyed in the season finale, but the Plantars still had the head and that got transported back to Earth with them thanks to the Music Box.

Polly brings the family into the garage to see her newly-fixed friend and just as she’s about to power him on, the group expresses their displeasure in the decision, suggesting that she wait until they get back to Amphibia. Polly is frustrated and turns on Frobo anyway, who isn’t calibrated just right and starts firing beams and blasting holes in the Boonchuy’s home.

The group tells Polly to stop working on Frobo and wait until they get back, and Polly reluctantly agrees, though likely won’t. She jumps on the computer and finds videos by the I.T. Gals who specialize in programming and fixing robots. Polly stays up all night watching the videos and working on the robot, and when she gets to a problem with powering Frobo, calls the duo directly who help her learn what battery to put in place of the two AAs she stole out of the TV remote.

Even the I.T. Gals tell her not to power it on in the garage, take it to an empty warehouse or open space, and even offered to help her find one before Polly disconnects the call and goes to power on Frobo. Frobo comes alive, but has been factory reset, forgetting all the memories he had of Polly and the Plantars, and blasts up into the sky, with Polly attached as he tries to find a signal.

As he launches, the I.T. Gals show up looking for the girl they were talking to, and Anne and the Plantars just point up. Frobo’s boosters start to fail, and the two start on path crashing back to Earth. Polly, mourning her lost friend, starts to sob and the tears seep into Frobo’s hard drive, shorting him out and restoring his memory. He places Polly in the dryer portion of his torso that Polly has given him to keep her safe, and they smash back into the ground.

While all of his body is destroyed, his head stays intact and powered on, still able to communicate with Polly.

The I.T. Gals show up and discuss with Polly how to fix him, showing the group (and hopefully viewers of the show) that the power of the internet to share actual knowledge, skills, and traits is right in front of them, and is better used for more than just cat videos.

Andrias’ robot is still on the hunt for Anne on Earth. It has successfully picked up a copy of the latest installment of the Wendy Coven series, but has not done the other half of what it was supposed to do: Kill Anne.

Andrias is done waiting and has activated the robot’s built-in self destruct sequence, giving the robot one hour in which to complete his mission, or he explodes. After several run-ins already with Anne and the Plantars, the bot has repaired itself with found parts, including saw blades, a nail gun, and a backhoe arm for gripping.

Back at the Boonchuy home, Anne’s parents are impressed with how mature she has gotten over the recent events, but Anne is overcome with guilt and is ready to explain to them that a killer robot is chasing her, and to tell them everything else that happened in Amphibia.

As she is ready to explain, she discovers a workout room where her mom would “work out” her suffering while Anne was gone by making sculptures of her daughter. At that moment, thanks to a recently reactivated Frobo, the killer bot shows up ready to take out his target.

The family escapes and leads into a high speed chase throughout Los Angeles while the countdown clock in his torso keeps ticking down towards his ultimate demise.

The family ends up in a junkyard, where Anne’s mom takes back everything she said about her becoming more mature. After a heartfelt moment, all is well, and Anne’s mom starts using the trash to build figures of Anne to trick the robot. The robot discovers the real Anne (while she’s attacking him) and traps her when Anne’s mom comes in and uses a sledge hammer to incapacitate the robot and the rest of the family starts attacking. Too late, they realize that the robot is set to explode in a matter of seconds and Anne’s glowing blue hair protective instincts kick in and she kicks what’s left of the robot out of the atmosphere where it explodes.

All is said and done, and Anne comes clean about everything else. That high speed chase however, did capture the eye of someone at the FBI though, who decides to call “Mr. X.” while looking at footage of the robot chasing the family van with Anne and the Plantars seen in the camera.

This episode of Amphibia is now available on Disney Channel and the DisneyNOW app. You can catch up with earlier seasons of the series on Disney+.