What if you could change your fate by changing the result of one moment in your life? How would that alter you as a person? This idea is the premise of Jim Belushi’s 1990 dramedy Mr. Destiny. 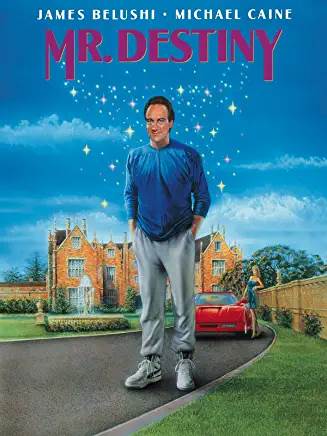 Larry Burrows is a junior executive at the local trading card company. Feeling angst as he approaches his birthday, Larry wonders what his life would be like had he hit the game winning homerun for his high school at the state championship.

On the night of his thirty-fifth birthday, Larry meets a mysterious stranger named Mike who provides the opportunity to see what life would have been like has he not struck out. When Larry returns home, he finds that his homerun instead of a strikeout at the plate has led to high school success. He never married his wife, Ellen. Instead, he married Cindy Jo, the prom queen. With his different marriage, Larry is no longer a junior executive, he’s the president of the trading card company.

While the wealth and opulence are appealing to Larry, he misses his old life. Reconnecting with Ellen, Larry’s life spirals out of control. Being chased by the police for a crime that he didn’t commit, Larry once again finds himself at Mike’s bar back on the night of his thirty-fifth birthday. His world is reset. Before he returns home to a surprise birthday party, Larry summons the courage to stop a crooked executive Niles Pender from selling the trading card company to foreign investors.

Jim Belushi is very likeable in the role of Larry Burrows. Belushi brings enough innocent wonder and humor to the role that audiences can’t help but root for Larry.

Rene Russo should have got more screen time. She is a joy as Cindy Jo.

Jon Lovitz is surprisingly subdued in his performance as Clip. From the confident friend at the beginning of the movie to the down and out failure half-way through, Lovitz creates a nuanced performance that has his humor and depth to Clip.

Michael Caine is the perfect person to play a mysterious angel character.

The movie wants to be It’s a Wonderful Life and it’s not. The problem with Mr. Destiny is that it has a great cast and a charismatic lead in Belushi, but the script has Larry Burrows making some outlandish choices that make the audience want to hate the character.

Larry claims throughout the film to love Ellen, but the first moment he gets to change his life, and finds out that he is married to Cindy Jo, Larry is quite happy with the new life. When he then meets up with Ellen again, Larry is more than willing to hurt Cindy Jo’s feelings to start his romance with Ellen. I wouldn’t want to be married to Larry. Who knows how fickle his love will be? Plus, Larry only seeks to go back to his old life after the cops start chasing him for a murder he didn’t commit. Larry made no attempt to get out of the new life until he was threatened by the cops.

Mr. Destiny could have been a great film. It had a talented cast, with familiar plot lines that contain enough of a twist to make it new and appeal to the masses. What if you could go back and change that one moment in your life when you failed at something? It’s an interesting concept that has inspired countless books and films and continues to appeal to people today because all of us ask that question at some point in our life.

Mr. Destiny gets a Level 2 ‘Streamy Award’. If you have nothing else to watch then throw it on, but if you get interrupted halfway through, you aren’t missing much.

Michael Keaton may be riveting audiences in Hulu’s Dopesick, but in 1991, he starred in Hollywood Pictures drama One Good Cop with Rene Russo.