In the newest episode of Sydney to the Max, people in Sydney’s and Max’s lives are feeling homesick. When Sydney’s cousin comes to live with her, she finds that no matter what she does, it’s hard to make a new place feel like home. And back in 1993, Max freaks out when his crush Alisha talks about moving back to Baltimore. Here’s a recap of “My Cousin Lexi.” Fun fact: This episode was directed by Raven-Symoné, star of Raven’s Home. Sydney’s 7-year-old cousin Lexi is coming to live with the Reynolds family for the rest of the year while her parents are volunteering in South America. Sydney decorated the guest room for her cousin with Georgia peach accents and miniature horses to remind her cousin of her miniature horse Winston, who is like a brother to her. Sydney tells Lexi to think of her like a sister and they make a plan to sleep in Sydney’s room and stay up late sharing secrets like their mothers used to do.

The next morning, Sydney wakes up to find that Lexi isn’t in her bed. It turns out that she’s so used to getting up early to feed Winston that she got up and made the family a big breakfast. At Reynold’s Rides, Lexi creates a new smoothie that everyone loves and Max adds it to the menu, calling it “Lexi’s Summer Delight.” Olive comes in and meets Lexi and thinks she’s adorable. There’s a party tonight and Sydney was going to stay home to help Lexi feel comfortable, but she seems like she’s settling in fine, so Sydney decides to go to the party.

When Sydney comes home, she finds her dad asleep on the couch without Lexi, who she finds crying in her room. “I want to go home,” Lexi says. Sydney tells Max and Judy and blames herself for going to the party. Max tells her it’s not her fault, Lexi was bound to feel homesick. Judy suggests that they bring a little bit of Lexi’s home to Portland.

The next day, Sydney talks to Lexi and tells her she can tell her anything when Lexi reveals that she didn’t share that she missed home because she knew how hard Sydney worked to make her feel at home. Sydney tells her that when she was at summer camp and felt homesick, swinging helped her feel better. They go to the backyard to try it, but Sydney was actually just trying to get Lexi in the backyard where Max and Judy have Winston, Lexi’s miniature horse. He will live with them, too, and Lexi feels a lot better. 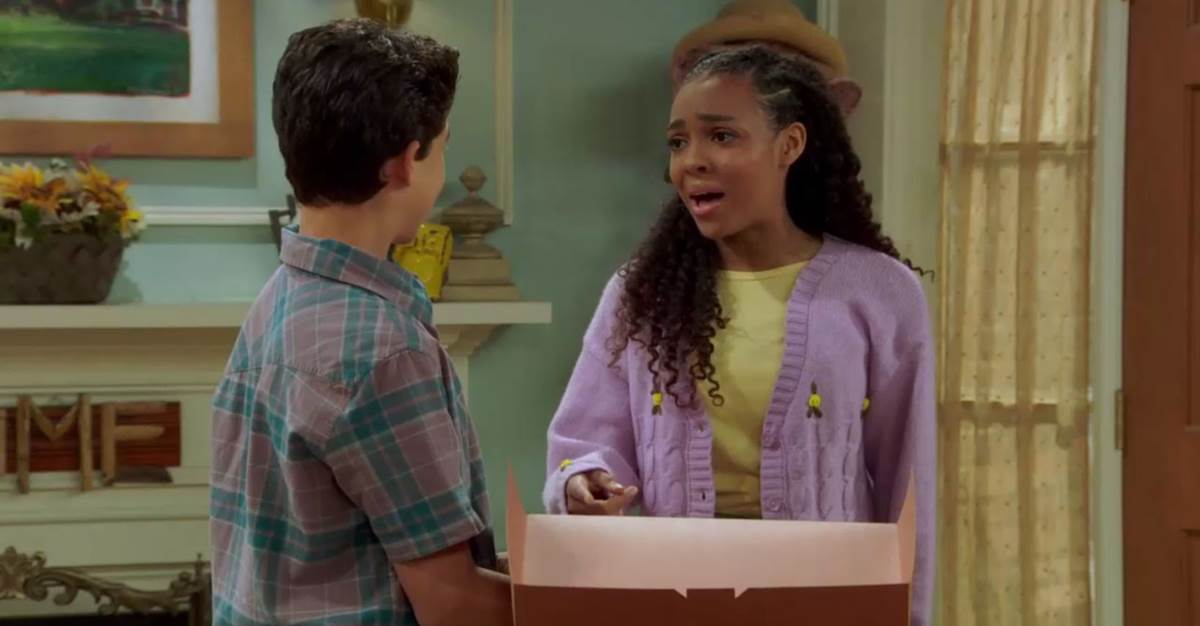 Alisha has been gone for two weeks visiting her friends and family in Baltimore where she used to live. Max has dressed up for her return, even putting her favorite candy in a dish on the table. When she arrives, she tells Max and Leo how much being in Baltimore made her miss her friends there. She is going to ask her parents if she can move back. When Alisha leaves, Max freaks out, but Leo convinces him that her parents will never let her do it.

Leo comes over the next day and Max is cool and confident, but Leo reveals that at last night’s family dinner, Alisha asked her parents about moving back to Baltimore and they said they will think about it. Max decides they need to convince Alisha that Portland is better than Baltimore, so he invites her over and shows her some of the reasons Portland is great, including Alisha’s favorite donut shop, reminiscing about a trip to the aquarium, and showing her a prank from the local joke shop. But none of these seem to work, as Alisha keeps bringing up something similar in Baltimore that sounds better. When Alisha leaves, Judy comes to the living room and asks Max what’s wrong. He tells her Alisha might be moving and she asks if there’s anything she can do. Max asks if they can move to Baltimore. “If there’s anything else I can do, let me know,” she jokes as she walks away.

The next day, Alisha finds Max swinging in his backyard and tells him that her parents said she can move to Baltimore. However, she decided to stay in Portland because she realized she would miss her family and friends there. She adds that she would miss Max in particular. They quickly break their flirtation by daring each other to swing higher.

Sydney to the Max will return on Friday, November 12th, on Disney Channel with “Praise Your Voice.” Here’s the official episode description from Disney Channel:

When Lexi volunteers Syd to sing at church for Youth Day, Sydney starts to wonder if she can pull off singing gospel music. In the ’90s, Max encourages Alisha to perform at open mic night.