A fun superhero parody on Earth precedes a pretty serious turning point in Amphibia and beyond for this season in the latest episode of Disney Channel’s Amphibia. 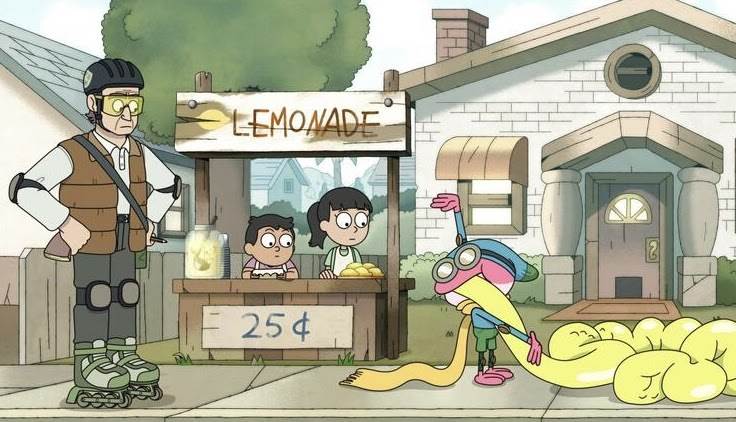 While Anne and the Plantars are still in hiding on Earth, they indulge in viewing a superhero movie while staying at home. This not-quite-a-Marvel movie inspires Sprig to become a superhero, as he watches the hero on screen be welcomed and cheered-on by humanity despite his abnormal appearance and abilities.

This half of the episode is a fun diversion from the rest of the overarching story of the series, and sees Sprig go about town in his homemade superhero outfit. He ventures into town, trying to become the vigilante that the city will cheer for, despite Anne’s insistence that he stay inside and keep a low-profile.

When some local youths are getting fined for running a lemonade stand without a permit, Sprig interferes with a community patrol officer, who thinks he’s a hero as well, Robert Otto (voiced by guest star Brad Garrett).

As Sprig’s popularity grows, he makes a splash on social media, and even saves Robert and his granddaughter Molly Jo in an incident with a brakeless bus. I should also point out that if you weren’t sure that this whole episode is a parody of Spider-Man, then Molly Jo would give it away, with her name similar to Mary Jane and her look similar to that of Gwen Stacy.

As Sprig becomes more widely recognized as a hero throughout town, he overshadows Otto as the figure that everyone looks to for help, angering the community safety officer. They even have their own version of the “Distracted Boyfriend” meme.

While angered about Sprig’s antics in the local junkyard, Otto comes across a robotic arm, which devotees will recall is from the destroyed bot that King Andrias sent to take out Anne and the Plantars. The whole scenario parallels Doctor Octopus from Spider-Man, and Otto sets out to find and eliminate Sprig with his new toy.

His quest leads him to downtown Los Angeles, where he finds and challenges Sprig in a battle wherein copious amounts of property ends up destroyed and passersby are put into danger just because the two are fighting. Molly Jo intervenes and points out they’re doing more harm than good, and in something new for this kind of scenario, we see the two team up to repair all the damage that they’ve caused.

While we expect Sprig to take off his mask like he saw in the movie at the beginning of the episode, he doesn’t but as Sprig takes off and returns home, Otto is arrested and held responsible for everything, leading me to wonder if we’re done with him and this was just a fun episode, or if we’ll see more of him in the future. Nothing ever seems to be a throwaway episode in Amphibia after all.

For only the second time this season, we are taken back to Amphibia proper, where Lady Olivia and General Yunan are trying to get to Marcy since they two feel that she is the only one who can help them out of the scenario they’re all caught in with King Andrias. The two are summoned to King Andrias himself, but before meeting him, catch him in a situation where he appears to be talking to himself, but is talking to something we’ve seen him talking to before, saying he isn’t sure he wants to go through with something, but inevitably agrees to this mysterious plan.

General Yunan is still hesitant to trust humans, but sees something is clearly wrong and agrees to help Lady Olivia rescue Marcy since she was the only who could beat the King at Flipwart, implying that she is the only one who can outthink him.

While the duo is able to get to Marcy and rescue her from her life support chamber, the now-trio tries to escape the room but it fills with a fog and mysterious eyeballs in the walls that they had passed on their way in are now projecting each of their deepest fears to them. Showing how cunning Marcy can be, she quickly realizes that the eyes are what’s causing these projections, and the three team up to take out all the eyes in the room.

The group is successful in doing so, but are ambushed by King Andrias who claims to have seen the whole thing, and reveals another eye beneath his crown.

Along with that eye, a large mechanical creature also appears and captures Marcy, restraining her to her own throne. Andrias explains that this creature, called “The Core” has every bit of knowledge absorbed by Amphibia’s greatest minds. Despite various research on other creatures in Amphibia, the Core wants a host that must be the smartest creature in Amphibia. Hey, remember earlier when it was mentioned that only Marcy can beat Andrias at Flipwart? Yeah that comes up again, this time to reaffirm why the Core has selected Marcy. She tries to escape, to no avail, and a helmet is placed on her head with numerous eyes to see all, and menacingly greets everyone as the Core has now taken over Marcy. Fade to black. To emphasize how serious this matter is, the normally bright and cheerful credit sequence is now solid black with ominous sounds and little music. Turns out, the quick superhero parody at the beginning of the episode was there to lighten the load the second half would bring.

This episode of Amphibia is now available on the Disney Channel and the DisneyNOW App. You can also catch up with earlier seasons of the show on Disney+.