Have you ever wondered if Gabby Duran would make a good detective? In the newest episode of Gabby Duran and the Unsittables, we find out in “Shoe-Dun-It.” The title is a twist on the detective mystery genre, often referred to as a “Who Dunnit.” Here’s a recap of the latest episode from Disney Channel. 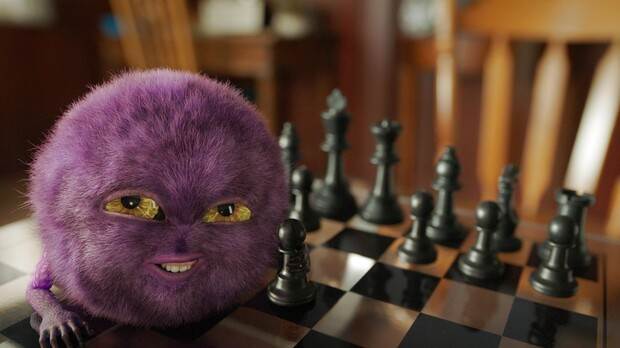 Gabby is making a smoothie at home when she gets a call from Principal Swift: “I don’t know how to tell you this, there’s been an incident in the vault.” Gabby freaks out and rushes right over to find that her prized pair of sneakers have been destroyed. “My shows have been murdered!”, she cries.

An open casket wake has been prepared in Swift’s living room and Jeremy, Wes and Olivia are present. After her eulogy, Gabby closes the casket and announces that she is going to find out who murdered her shoes. Worst of all, she suspects Swift, Wes, Jeremy and Olivia since they’re the only ones who had access to the basement Comms Room where the vault was located. Her first clue is a fingernail found near the shoes and she points to Wes, who is a nervous nail-biter.

Wes walks Gabby through his morning of Senior Executive Liason duties around Swift’s house, which give him alibis for not being in the Comms Room at the time the shoes were destroyed. Gabby asks why he was nervously biting his nails and Olivia rats him out, saying that he lost the Blurble. She was helping Wes as the Junior Executive Liason and helped him find Jeremy Jr., luring him out with a game of chess. If she lost, she would have to spend time in the Blurble crate, which she did.

Gabby gets an idea, remembering that The Orb records everything. When they get back to the Comm Room, they find The Orb has been destroyed, wires hanging out of its shell. Gabby believes that whoever destroyed The Orb is the same person who murdered her shoes. She’s able to get its projector working and sees Julius, the server from Luchachos, in the Comms Room in the recording. But Gabby knows that the real Julius knows nothing of aliens and accuses Jeremy or Swift of shapeshifting into him.

Jeremy’s alibi is that he wanted to play tag and neither Wes or Olivia could play, so he shapeshifted into a Blurble, making Wes believe he lost Jeremy Jr. After defeating Olivia in chess, he celebrated by punching holes in a wall, which he shows Gabby.

Swift says that he was unwinding from the work week by recording foley sound effects to his favorite films. Because of all the noise from Wes, Olivia and Jeremy, he retreated to the basement where he says he found the shoes already murdered.

Wes asks Gabby if he can go to the bathroom and on his way, he gets pulled into a closet. Wes returns with a very different attitude and is about to attack the group with a baseball bat when the real Wes enters, having broken free. The imposter Wes turns out to be Glor-Bron, who was fired by the Supreme Leader and he decided to hide on Earth in Swift’s house to avoid shame on Gor-Monia. Glor-Bron knows nothing about the shoes and when he sneezes, he asks if it’s dusty in the living room. Gabby checks the mantle and realizes that it is.

Gabby knows her sister to be meticulous and thorough, so if she says the mantel was dusted but it wasn’t, she says that means everyone is lying since their stories are all connected. Swift reveals what really happened: He’s been using her shoes for his sound effects on a weekly basis and discovered a scuff mark on them. He asked Jeremy for help cleaning them, which made them worse, and Wes further complicated things. Olivia was asked to help and she sprayed them with a solution that she didn’t realize wasn’t meant for shows. In the end, they agreed to create a story that placed the blame on none of them, fearing that Gabby would never speak to them again if they knew they ruined her shoes. As for Julius’ appearance, Jeremy reveals that he morphs into him sometimes to play restaurant. Gabby ends up forgiving them all, revealing that she has a backup pair of her favorite shoes.

The next episode of Gabby Duran and the Unsittables premieres Friday, November 19th, titled “Magic Hours.”

When Gabby and Wes’ school project gets wiped from Wes’ ancient laptop, they go on a wild ride to resurrect it before it’s due.