Disney Sidekicks is a cooperative style family board game. Your goal is to save the hero and defeat a villain.  While several villains are at play within the game, only one must be defeated to win when that’s coupled with the sidekick rescuing the hero of their story. To do this, you’ll collect enough stars to unlock the castle locks and defeat the Villain by a series of attacks reducing the Villain’s health. Along the way, you’ll also rescue villagers and avoid castle guards, all of which sounds like a gaming experience I’m more accustomed to within a mobile game than the real world. 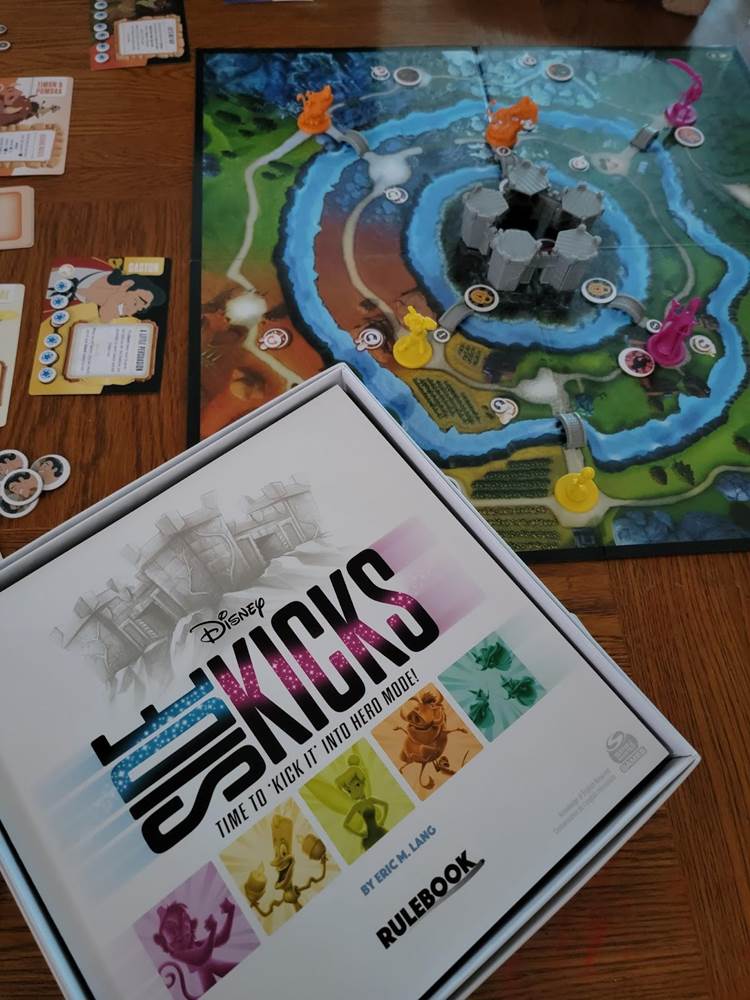 Gameplay is dictated primarily through a card deck while a dice roll comes into play when the villains and sidekicks battle. Each player turn consists of two phases – the Danger phase and the Action phase. In the Danger phase gameplay is directed by the card pulled from the Danger Deck. These cards increase the threat of the villains and move them around the board. In the Action Phase, Sidekicks have a variety of actions available to them whether it be to move, attack or others as they seek to rescue the trapped Heroes. 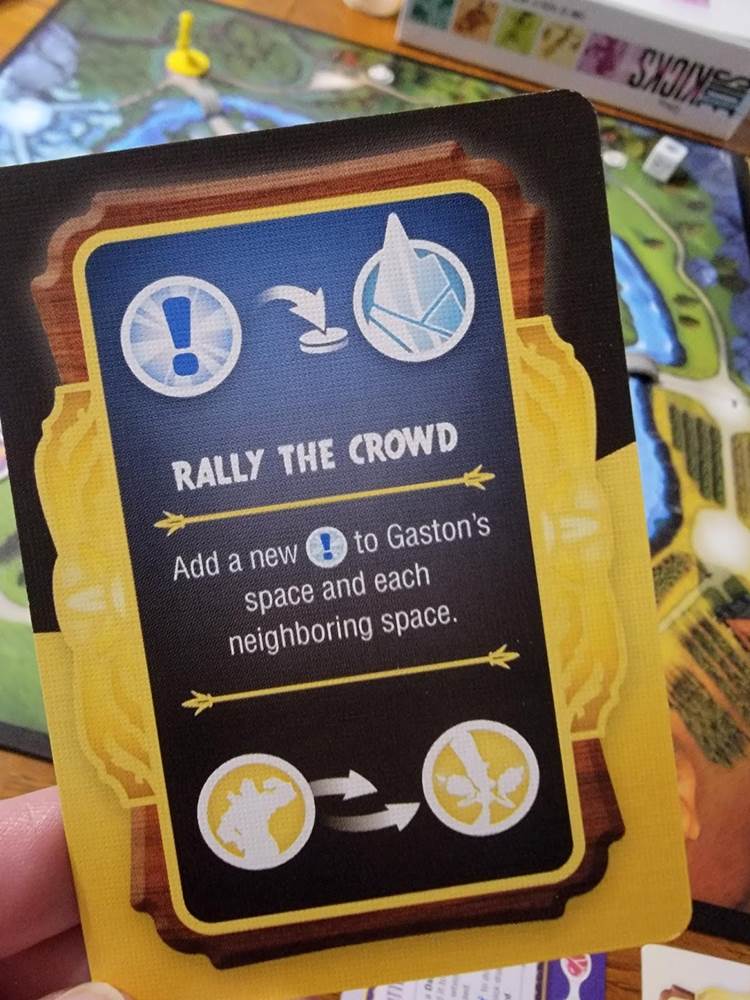 This card indicates you’ll play a Villager in the icy zone of the board, add a Villager to Gaston’s space and on either side of his piece. Then move his piece two spaces closer to Lumiere. 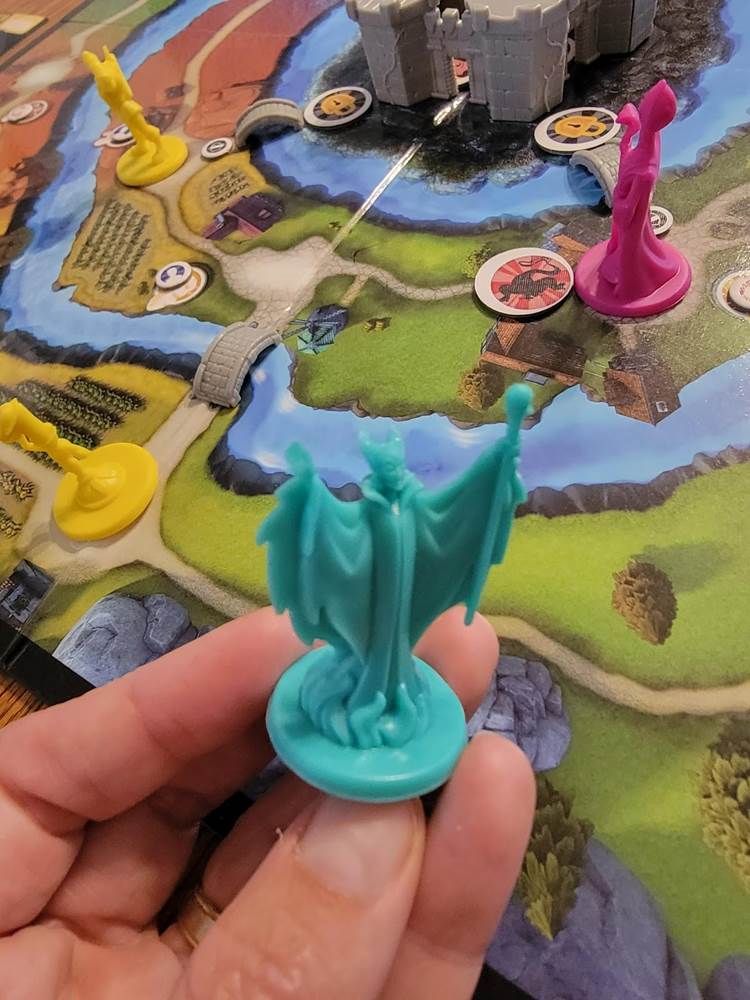 Game pieces are solid colored dimensional figures of the Sidekicks and Villains at odds. You can play as Timon & Pumbaa, Abu, Lumiere, Tinkerbell, as well as Sleeping Beauty’s three fairies, Flora, Fauna and Meriweather. Villains game pieces include Scar, Jafar, Gaston, Captain Hook and Maleficent. The heroes that are locked behind the castle walls are simple flat tokens.

Word of warning about this game: while gameplay is listed as under an hour, game setup, especially the first time through, can be tedious. There are numerous tiny tokens to poke out and place. In addition, each villain/sidekick has a slightly different game setup. Thankfully, upon opening the game box, there’s a link to a step by step video but if you’re playing with younger or less patient family members it would be advisable to get a majority of that setup completed before inviting the family to sit at the table to play. 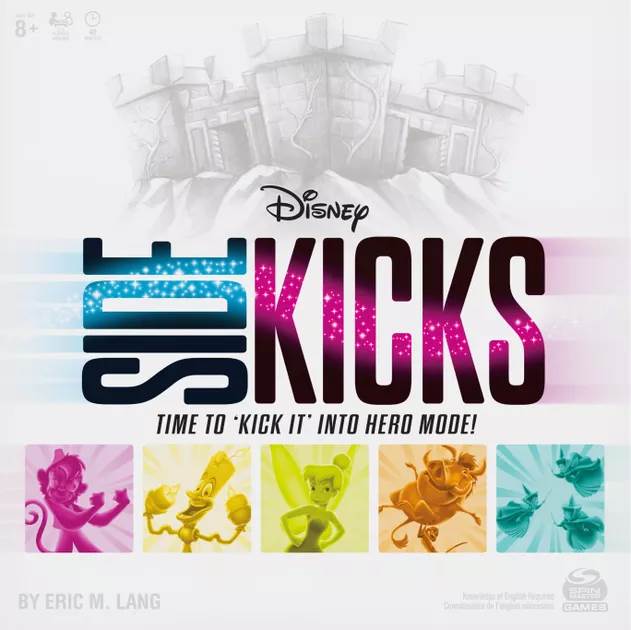 With the board game setup, I continued to read through the directions in preparation for gameplay and found I couldn’t get a firm grasp on its mechanics. As we played the game we began to better understand and at times realized we weren’t playing certain elements within the game correctly as the rounds continued. I tend to enjoy games based more on random card draws, roll of the dice, etc. than strategic games and while this game seems to lean less on strategy there are just so many elements or gameplay options that it required more thought than I enjoy in my game night. If you enjoy complex games of luck, Sidekicks might be for you. But I think it’s complicated rules will prevent it from being a hit with most younger players.