Finding your way in the world, being true to yourself and your values, and learning that friends can be family, is at the heart of Lost Legends: The Rise of Flynn Rider. It also doesn’t hurt to learn that creating the perfect smolder is not something that can happen overnight.

All this and more I learned from author Jen Calonita. 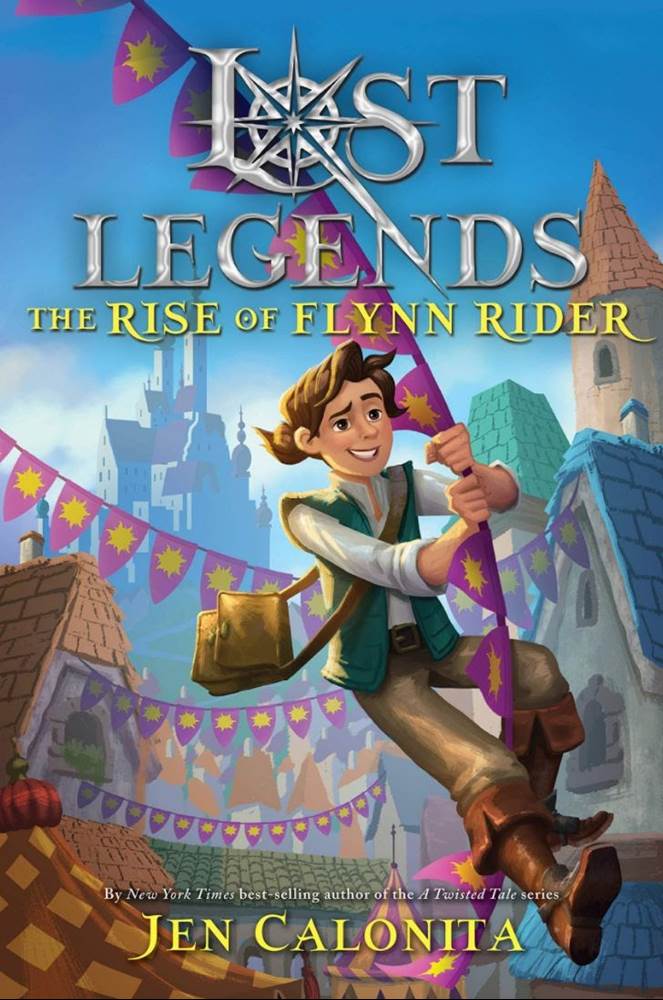 It is no secret that Lost Legends: The Rise of Flynn Rider is my favorite Calonita novel to date and, after doing my best to convey just how much I loved this book in my recent review, I had the opportunity to chat to Jen and discover the inner workings behind this exciting, clever and Flynn-ishly fun adventure story.

Jen, thank you for chatting with us!

How do you feel now that Lost Legends: The Rise of Flynn Rider has been released into the world?

I’ve decided that September 21st was the Best Day Ever! I was so excited to see Eugene’s origin story out in the world. I’m hoping Tangled and Tangled the series fans will love his adventure as much as I do.

What appealed to you most about writing about the one-and-only Flynn Rider (or as fans fondly know him, Eugene Fitzherbert) from Disney’s Tangled?

He arguably has the best lines in the movie, he makes me laugh, he’s a lovable rogue…I could go on and on. I have always loved Tangled and wondered who the real Eugene was. When I got the chance to tell his story at age twelve, I jumped at it!

What inspired or otherwise provided some guidance for the story you wanted to tell in Lost Legends: The Rise of Flynn Rider and why?

In Tangled, I love that moment when Rapunzel and Flynn are doing their little confessional with one another after escaping the guards and Flynn confesses his real name is Eugene. And then he goes on to talk about the orphanage and The Tales of Flynnigan Rider he read as a kid. It was the perfect jumping off point for the story. The Tangled series is canon, so I was able to pull a bunch of characters from there like Eugene’s best friend, Arnwaldo Schnitz, and pretty soon I had this buddy road trip story that was so much fun to put together.

This is my favorite story of yours that I have read so far – I absolutely loved it! What other feedback have you received on the book and has it been what you expected?

Thank you! That means so much to me. I really wanted this to be a love letter to Tangled fans. I’ve heard back from some Tangled the series fans on social media and they loved spotting cameos from the series and seeing how everything ties together. I’m a fan, just like everyone else is, so I’m always thinking of that responsibility as I’m writing. I want readers to enjoy this expanded look into the life of one of our favorite characters.

Before beginning this project, did you have an idea from the outset about how a Flynn Rider origin story might go? Or did you only really start thinking about it once you knew you were going to be writing the book?

Whenever I had questions about Flynn or the Tangled universe, I was so fortunate to have the guidance of executive producer and creator of Tangled the Series, Chris Sonneburg. He was amazing! I would text him questions about the world, or ask about maps of the kingdom, and he was always so willing to help. In fact, this book is dedicated to Chris because when I was plotting the story, he was a huge help to me. He actually took a train ride out to Long Island where I live because I couldn’t get into Manhattan to see him, and we sat at a Starbucks and he let me pick his brain about all things Flynn!

Arnie/Lance is Eugene/Flynn’s best friend in Lost Legends: The Rise of Flynn Rider. He is such an important character, not only because of his relationship to Flynn but also because of his own personality, dreams and sense of adventure. Tell us a bit about how he came to be in this story.

I loved when we met Arnie/Lance in Tangled the Series and we learned that these two had a past—they were friends from the orphanage and had done jobs together till they had a falling out. In my story, we see how they really are each other’s ‘person.’ They’re family and sometimes families don’t get along. When your best friend in the world wants to take a different path than you, which path do you go on? Do you trust your own instincts or follow in your friend’s footsteps? Who is right? Who is wrong? Or is the real answer somewhere in the middle? It was fun to figure out Arnie and Eugene’s dynamics.

I was so happy that the Snuggling Ducking pub thugs – Hook Hand, Big Nose, Attila, Vlad, Ulf and Shorty – play a pretty significant role. How many times did you watch Tangled to nut out their characters and what other sources did you look to for inspiration in developing them?

Yes, I’m so glad I was able to include the pub thugs in this story! I don’t want to give too much away, but they’re a big part of the story and it was fun figuring out a way to include them that was new from anything we’ve ever seen before. I felt like I watched the Snuggly Duckling scene in the movie over and over again to catch each one of them right and to figure out their quirks.

Each chapter begins with a quote from Eugene’s favorite book series, The Adventures of Flynnigan Rider. You must have had so much fun thinking about those background tales in the context of your book. Did you know early in the drafting process that those introductory quotes for each chapter were something you wanted to include in the book?

When Chris Sonnenburg told me he thought The Tales of Flynnigan Rider was more like a serialized series, I started to imagine a comic book of sorts that had multiple stories. Flynn started out with a bunch of books so I created lines from multiple stories that tied into each chapter. It was so much fun thinking about the “real” Flynn’s story.

You do a marvelous job of continuity in terms of connecting Tangled’s Flynn Rider to your Flynn Rider. Is it difficult to keep an already-established Disney character in sync what a wholly original plot?

Thank you! I think the hard part for me was creating a younger Flynn who is not so sure of himself yet. When we meet Flynn in Tangled, he’s perfected his smolder (or so he thinks) and he’s a dashing rogue who is confident and can crack a great one-liner. But that’s not who he is yet at age twelve. No one really knows who they are yet at age twelve. Eugene is trying to figure out who he wants to be, how he wants to project himself to the world…and of course, is trying to learn how to smolder! He’s funny, but his quips aren’t perfected yet so sometimes I’d have a great line that I’d have to pull back on because I’d worry it was too good for him to come up with at age twelve!

What do you think are the key thematic takeaways, or what themes resonate most with you, from Lost Legends: The Rise of Flynn Rider and why?

Finding your way in the world, being true to yourself and your values and learning that friends can be family. Arnie and Eugene are brothers in every sense of the word.

Who is your favorite character in Lost Legends: The Rise of Flynn Rider and why?

How can it not be Eugene/Flynn? He’s truly my favorite, but I do get a real kick out of The Baron and an appearance by Staylan!

What relationships were important for you to explore in this story and why?

Friendship was a big relationship to explore in this story. Twelve is that time in life when some friends move on to new adventures without you. Sometimes you drift apart or want different things. It’s like Eugene is headed off to middle school, which can be a difficult time. He’s always done everything with Arnie and now they suddenly have different wants and needs. Does that mean they can’t be friends anymore? Friendships are constantly evolving just like Arnie and Eugene’s.

Without giving too much away, what is your favorite scene or chapter in Lost Legends: The Rise of Flynn Rider and why?

The whole section of the book involving the Snuggly Duckling. We’ve got the Stabbington Brothers! The Pub Thugs! We’ve got a bait and switch moment, a bit of adventure. It makes me think of that line Flynn says to Rapunzel in the film: “A little rebellion. A little adventure. That’s good. Healthy even.”

What are your likes and dislikes, strengths and weaknesses, that you can you share with us about writing Lost Legends: The Rise of Flynn Rider vs other writing projects that you have done?

I like to really nail down an outline before I start writing. Then I get very excited about the outline and…have trouble starting the book. I could take a week rewriting the beginning before I dive in. I’m someone who hates first drafts and loves revisions. Getting the story out of my head onto paper is the hardest part of the process for me. And really making sure Flynn and Lance/Arnie’s friendship worked well was another part I worked on for a while. It was important to get it right.

The rewarding part was that I felt like I could HEAR Eugene/Flynn in my head when I was writing his dialogue. I knew who he was and what he would do next. The hard part was making sure I was channeling Eugene/Flynn age twelve and not the character we know in the movie and the TV series.

What is next for Jen Calonita?

Disney-wise….I can’t actually tell you yet! But I am working on more Disney magic and that makes me truly happy. And I can say there will be more Lost Legends’ stories about other young rogues in the Disney universe. I think you’ll like the next pick too. ☺

What do you ultimately hope readers get out of Lost Legends: The Rise of Flynn Rider?

I hope they realize that you’re never too late to right a wrong. That friendships are worth fighting for. And that creating the perfect smolder is not something that can happen overnight.