Marvel’s Hawkeye has been wild and fun up this point – introducing some great new characters and delivering some crazy action. There’s also the element of this murder mystery and we’ve been left not knowing who we can trust. And yet, it’s still felt like something is missing, and we got that something in this fourth episode titled “Partners, Am I Right?” 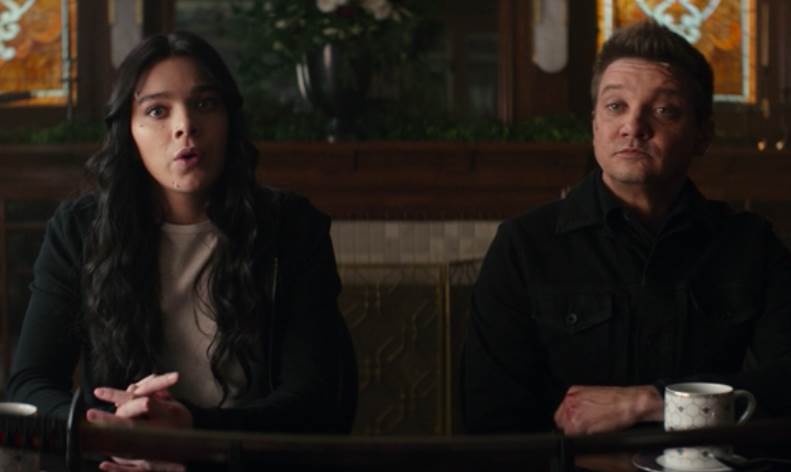 This episode picks up right where we left off, with Jack holding the Ronin sword to Clint’s throat before Kate rushes in and breaks up the situation. Eleanor then enters and asks why there’s an Avenger in her home, which helps Jack to realize who it is he’s threatening.

The four of them sit down at a table to discuss the situation and Kate and Clint get into a bit of debate as to whether or not they’re partners and/or friends. The awkward energy between the four of them adds a lot of humor to this scene. Kate explains that she has been working with Clint on a case, which seems to concern her a bit. Clint notices the Ronin sword in the corner of the room just before Eleanor offers to walk him out.

At the door, Eleanor pleads with Clint to “forget this case,” in an effort to keep Kate safe. He tells her he can’t drop the case but he will make sure Kate is safe. It seems to me that Eleanor was trying to get Clint to give up because she is somehow involved, but that remains to be seen. After Clint leaves, we do see her make a phone call and leave a message asking for someone to call her back, saying “it’s urgent.”

Clint asks Laura to get information on Sloan LTD., the company they found out has some sort of connection to Jack. Laura tells him the man she spoke to had a Russian accent, implying their connection to the Tracksuits, and that Jack is the CEO. Clint questions if Jack is laundering money for “the big guy,” once again implying the involvement of the Kingpin. He tells Laura he’s going to need another day because he has to make sure Kate is safe.

Laura speaks in German to keep the kids from understanding and asks Clint if anything else went missing from the Avengers compound. Clint immediately realizes she’s talking about “the Rolex,” the watch we saw the Tracksuits take from the auction. He points out that it’s worth looking into and Laura tells him to get some rest and ice.

Back in the Bishop home, Jack, Eleanor and Kate sit down to discuss the situation. Eleanor tries to get Kate to drop the Jack topic and instead asks her to help in planning a Holiday party. Kate watches Jack and Eleanor dance and actually cracks a smile at the sight of her mother so happy. They then share a laugh at the expense of Jack and it appears Kate might be coming around on him a little. 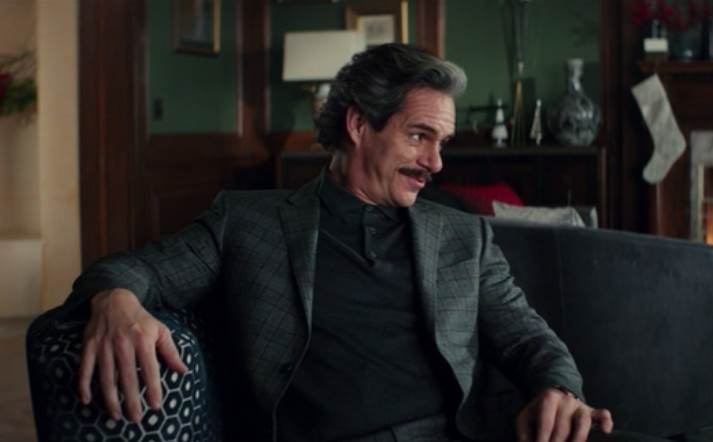 Clint tries to ice up to recover from their recent fight and is interrupted by Kate, who shows up with pizza and some holiday fun. Clint tells Kate about Jack’s involvement with Sloan, which seems to surprise her a bit for a moment, but then she gets back on board with taking him down. We get a montage of them planning their next move, decorating the apartment, watching Christmas movies and Clint teaching Kate some moves. The fun comes to an end when Kate brings up a conversation about Natasha and Clint finally shares a little bit about his history with his best friend. It’s both a breakthrough in their relationship and a cathartic moment for Clint. It also leads to Kate learning that Clint was Ronin, though it seems as though she suspected that all along. Before going to sleep, Clint has some flashbacks of losing his family and Natasha’s death.

The two archers go over their plan the next day, which involves Kate meeting with the LARPers. She asks one of them, a police officer, to go and get the arrows out of evidence lockup. They agree to help her if she makes it worth their while.

Meanwhile, Clint gets the drop on Kazi in his car and tells him to try and convince Maya to drop her hunt for Ronin. He explains that he simply doesn’t want anyone else to die and if Maya keeps going after Ronin, that will happen. He also mentions Kazi’s boss and tells him he knows he doesn’t like attention. More Kingpin nods.

Clint arrives at the apartment of one of the LARPers, probably Grills. He finds Kate being dressed up in a new LARPing costume made by one of the LARPers. Kate tries to hire one of them to make costumes for both her and Clint. The conversation is interrupted when Clint gets a text from Laura saying the watch wasn’t destroyed and that the transmitter is pinging from an address in the city. On their way out the police officer arrives with a bag full of the trick arrows and, after an awkward moment regarding her bag, hands them over to Clint. 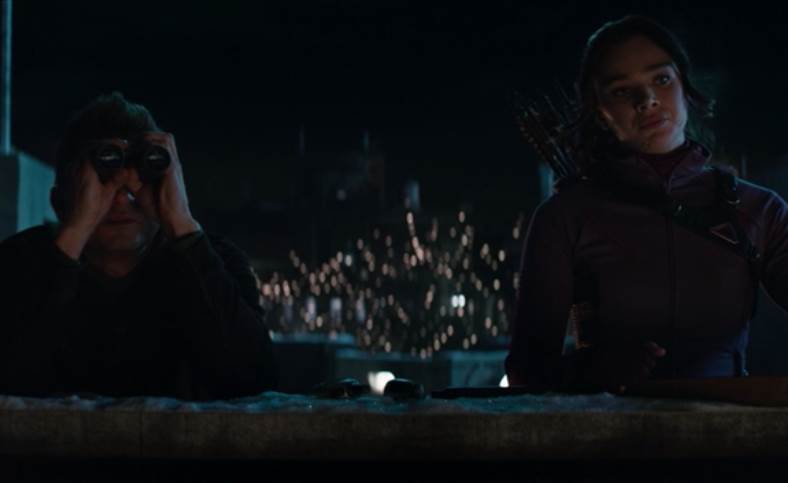 Kate and Clint scope out the apartment where the watch is being held. After they realize no one is home, Kate sneaks away and break in herself, much to Clint’s dismay. Once inside, Kate notices a couple of strobe lights going off in the corners of the room. She quickly takes them out with putty arrows and goes about her business. Clint explains that she is looking for the watch and that it belongs to someone he used to work with. He goes on to explain that this person has been out of the game a long time but their identity is still attached to the watch and if the Tracksuits got it, they would blow their cover. We obviously don’t find out who this friend is, but it seems possible it could have belonged to Matt Murdock, better known as Daredevil.

Kate finds the watch but also spots a notebook with details about Clint’s family. Clint tells her to get out and that the strobes were a silent alarm for people who can’t hear. Kate then hears that Clint is being attacked and before she can do anything, she gets attacked by Maya. We eventually see that Clint is fighting someone else on the rooftop.

Kate escapes the apartment and gets over to the rooftop to help Clint, before Maya makes her way there too. Kate, Clint, Maya and this mystery person fight it out for several moments before Kate is tossed from the roof before Kate is tossed from the roof by the mystery assassin. Clint rushes to the ledge to find that this assassin used Kates own cable to attach her to the building so that she didn’t fall all the way to the ground. Clint finds her hanging from the building and, in a moment similar to Black Widow’s death, he cuts her free so that she falls safely onto some strings of Christmas lights.

Kate rushes back up to the roof and breaks up the fight with some sort of concussive blast arrow. She then hits Maya with an arrow, which causes her to leave the fight. Clint attacks the assassin and removes her mask, revealing that she is Yelena. Kate has a shot to take her out but passes it up, similar to what Clint did with Natasha. Yelena escapes and Clint tries to tell Kate that this has gotten too serious now because someone has hired a Black Widow assassin. He tells her he is now doing this along, which Kate of course opposes. She angrily walks away from Clint as the episode comes to a close. 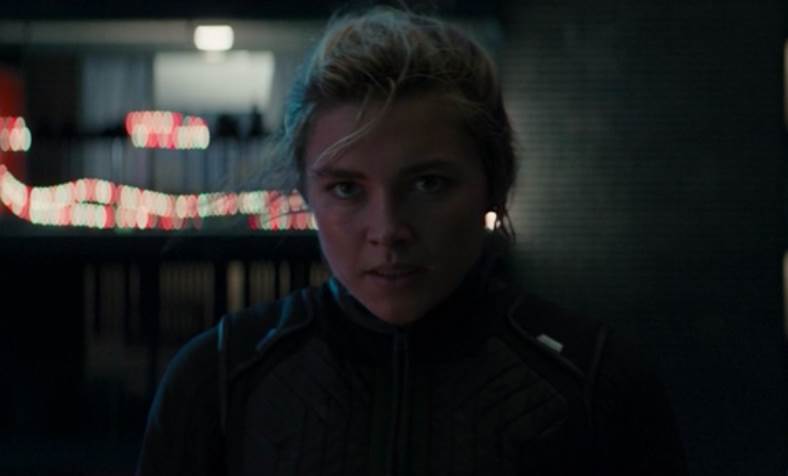 There is just so much going on in this show. We already have Clint and Kate taking on organized crime in New York and investigating the potential murderer marrying her mother. Not to mention the presence of Echo and probably Wilson Fisk and this watch mystery. Now, we’ve also got Yelena trying to kill Clint. This was another incredibly exciting episode and it is setting up a very interesting couple of weeks for us before this series comes to a close.