Friends On-Screen and Off: The Camaraderie of NBC’s “Grand Crew”

Welcome to Dolly Pitchers, the hangout for the Grand Crew, NBC’s newest comedy series. It’s easy to connect the dots between this and other famous TV hangouts, including the titular bar from Cheers or the Central Perk coffee shop on Friends. "Cheers is such an iconic show that if you were making a television show, you are aware of that show,” series creator Phil Augusta Jackson said during a press conference for the new series. “It's just an inspiration to look at a really great piece of writing, but I don't think the bones or the structure of this show is super close to what they were,” he added, noting that the similarities stop there. 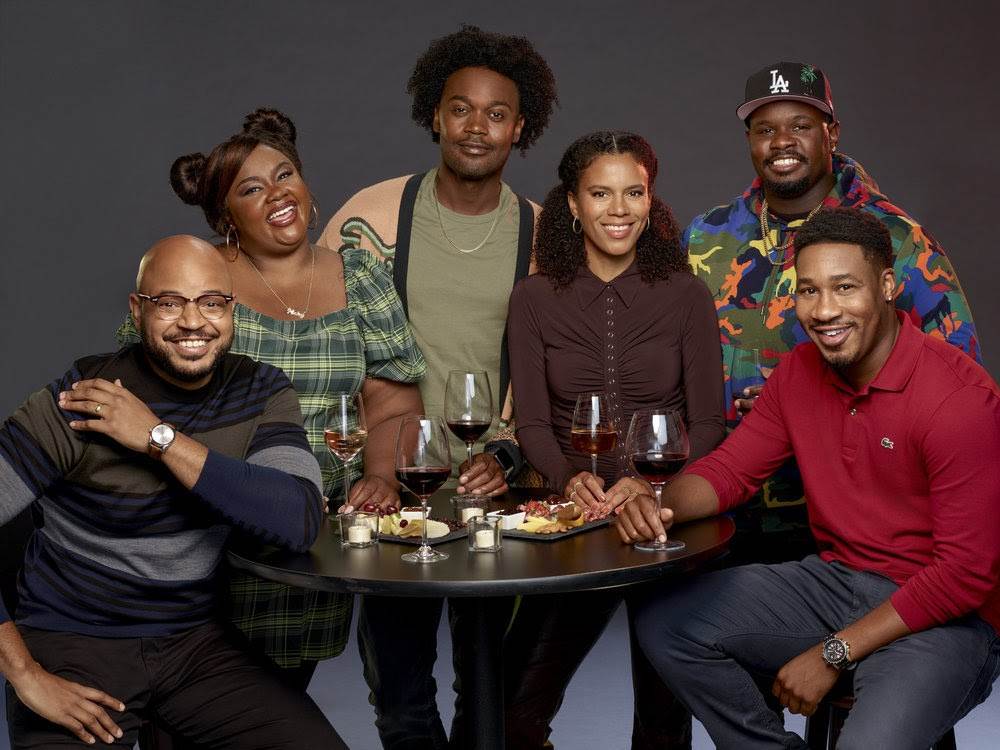 One thing that became clear quickly is that the cast had a great time making Grand Crew, largely because many of them were already friends. “Phil and I did improv together in New York for a very long time,” Nicole Byer revealed, who plays Nicky on the show. “Her name is Nicky, my government name is Nicole, she's based on me a little bit… I feel like our writers' room and Phil are just so talented that everything that was written was just easy. It was easy to find, it was easy to say, it was easy to perform.”

“We are actually good friends in real life,” Echo Kellum added, who plays Noah. “Phil wrote an amazing script and a lot of just really deep, fleshed-out characters in different ways than I've seen them, and I was very excited to get the opportunity to come and play any part on it.” Phil based the series off his own group of friends who all like to hang out together at a wine bar. “I think we all have a lot of commonalities and experiences that we go through, being young Black professionals just trying to survive in L.A., and so these characters definitely connect to that struggle and the successes and wonderful aspects of that aspect too.”

Not all of the cast are Phil Augusta Jackson’s personal friends, though, and there were auditions to fill many of the roles. “This is the first audition I personally have had in a really long time where I read it, and not only did I think it was so funny, but I didn't feel like I had to play at a stereotype of a Black woman that I so often have to play at,” Grasie Mercedes explained, who plays Fay. “I felt like I can just bring who I am to this character, and it felt really good. I felt really excited about it where a lot of times I feel, like, ‘Oh, I'm not that thing they want me to be,’ and that thing we see over and over again. And that's what I think is so refreshing about all of these characters.”

Justin Cunningham agreed with those feelings, having grown up in Arkansas before moving to New York and living with a mix of perceptions about him based on his skin color. “When I was auditioning and we got this script, people were talking about this script,” the actor who plays Wyatt shared. “Me and my friends of color, we were, like, ‘Have you gotten this script?’ And what was so unique about it was that it was so human. And it was not necessarily making fun of the stereotypes, but it was showing the human side that we didn't get to explore as actors. And that's what really drew me because I really fell right into this character. And even in my audition, I had so much fun going on tape for it because it wasn't playing towards these stereotypes. It was showing that I can be human in this industry and I can be human through my art as well, and that's what really drew me.”

“I had the opportunity to audition for a few of the characters, and what I loved about it through the auditioning process was that each character forced me and enabled me to tap into a different side of myself, and still they were fully fleshed out and dimensional characters,” Aaron Jennings added, who plays Anthony. “These are people that I know in life and that I see on a daily basis that I have had experience with. And I was so happy to see that, especially on a network such as NBC, to see that. I don't think we oftentimes get that opportunity. And not only is it fully realized, but there's also a lot of humor, and there's also a lot of fun that we get to have in going to work every day. It's a fun set to be on. We are collaborating with people who are passionate about the work but also have just this immense humanity and capacity for love, and that's what we want to bring to the audience is that love and that fun.”

Carl Tart echoed that sentiment. “I never want to work on another set again because this one is so perfect,” the actor who plays Sherm shared. “It was such a fun time. Like, even the hard days weren't hard because we had such a good time. And literally everybody who we worked with, everybody was so fun. It went so perfectly the whole time that we would be, like, ‘Who is going to ruin it?’ I guess it's up to me to come in and demand more money next season,” he joked.

While some of the Grand Crew team were old friends, Phil Augusta Jackson wanted to extend that spirit to the rest of the cast. “When everyone got cast, we were hanging out,” he explained. “We would meet at these bars just to try and get the chemistry popping early. And so that definitely was a thing that was top of mind as far as just building the chemistry that was already built in because a lot of these folks have known each other for a long time.”

You can meet all of these folks at Dolly Pitchers in Grand Crew, premiering with two back-to-back episodes on Tuesday, December 14th at 8/7c on NBC. The series will continue on Tuesdays at 8:30/7:30c beginning January 4th. Episodes will be available to stream after air on Peacock.