Six Flags is Building a Park in Saudi Arabia and It Looks Incredible!

Today, Six Flags announced more details on an entirely new theme park project of theirs, which is unlike anything I’ve ever seen from them. I thought I’d break down what was announced and see just what is so exciting.

Six Flags Qiddiya will be part of a new entertainment complex being built in Saudi Arabia. In fact, this will be the first Six Flags park built from scratch since Six Flags St. Louis in 1971. All other subsequent parks were acquired by the company. The theme park will cover an area of 320,000 square meters and will feature 28 rides and attractions of which 10 will be thrill rides, with 18 rides designed for families and young children. Perhaps what is most exciting about this new park, is the level of theming and detailing that will be going into it, which is entirely unlike Six Flags. The rides and attractions at the theme park will be spread across six immersive lands: The City of Thrills, Discovery Springs, Steam Town, Twilight Gardens, Valley of Fortune and Grand Exposition. Let’s break down the theme of each individual area… The central hub of the park will be the Citadel which will be covered by a billowing canopy form inspired by traditional Bedouin tents. Home to a wide range of cafes and shops, the venue will transform into an interactive show space throughout the day. From here, visitors will find gateways to each of the themed lands. 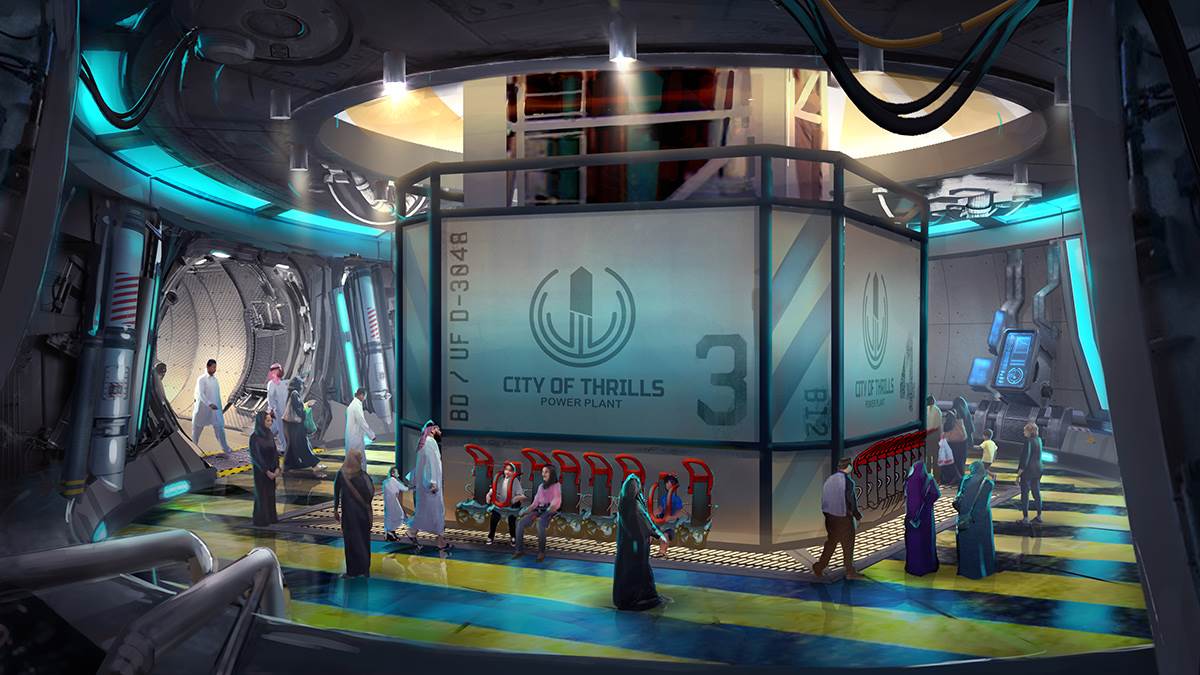 The City of Thrills is the embodiment of Vision 2030: a forward-looking, boundary-pushing, future city anchored in Arabic design motifs. Here, visitors will find Six Flags Qiddiya’s most recognizable and anticipated thrill rides including the record-breaking Falcons Flight, inspired by the Kingdom’s iconic raptor and the Sirocco Tower. 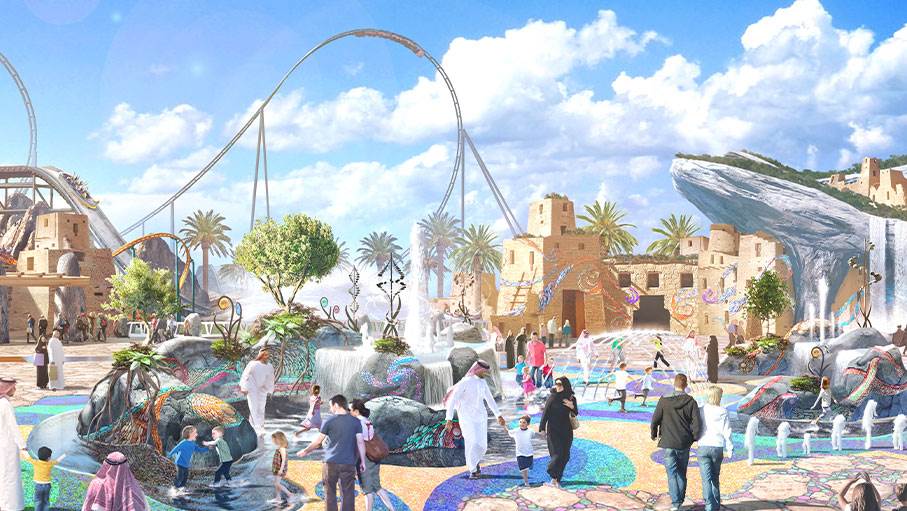 Discovery Springs is an aquatic wonderland of waterfalls, aqueducts and geysers as well as exotic plants and trees. This oasis offers visitors relief from the summer heat by creating the feel of a dense rainforest in the middle of the desert. It will be home to an interactive ride called the Sea Stallion, where riders are propelled over rivers, behind waterfalls, and through trees along a custom-designed course, as they control the speed and acceleration of their vehicle. Steam Town is themed around mechanical marvels and a collection of dynamic contraptions. Its signature ride is the Iron Rattler Mine Train which features a hydraulic lift that releases passengers into a freefall plunge through a narrow, steam-filled mineshaft. Other key attractions include the Steam Town Falls Water Coaster which combines a roller coaster track with a splashing boat ride, a spinning mechanical ride called the Bull Rider and a custom-themed climbing structure called the Treehouse Trek.

Twilight Gardens is an oversized landscape of the imagination filled with colorful flowers and friendly creatures, all exclusively designed for younger visitors and their families. This enchanted land’s key features include the Twilight Express Coaster, which takes passengers through a majestic garden, the Critter Chase, an interactive dark ride set in a 3D environment, and the Kaleidoscope hot air balloon ride. 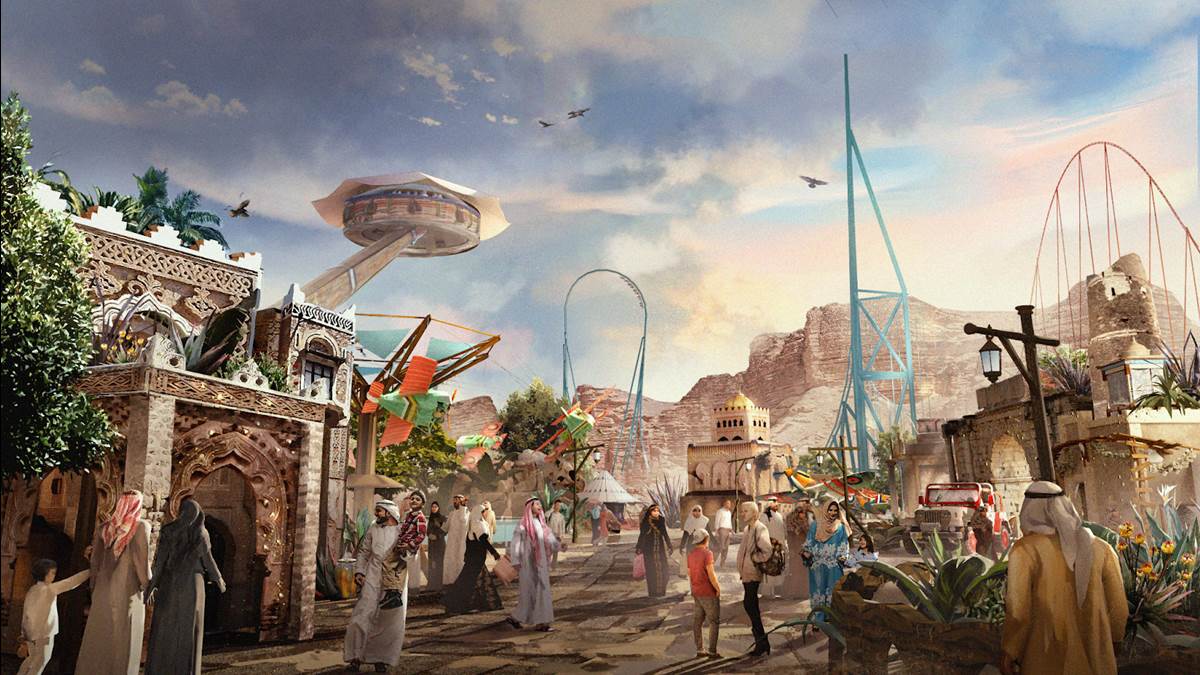 Valley of Fortune is an exciting land of adventure that takes place amidst time-worn architectural ruins of old Arabian masonry, enlivened by the activity and trade of fortune seekers from around the world. This land’s signature attraction is Spitfire, a triple-launch coaster, which will take guests into a sky roll before an acrobatic stall and a breathtaking dive back to the valley floor. Other attractions include Skywatch, a hydraulic boom ride where riders are lifted into the sky, the auto-themed Treasure Trail, and the Canyon Charters, a family plane ride that swings and rotates freely above the park. 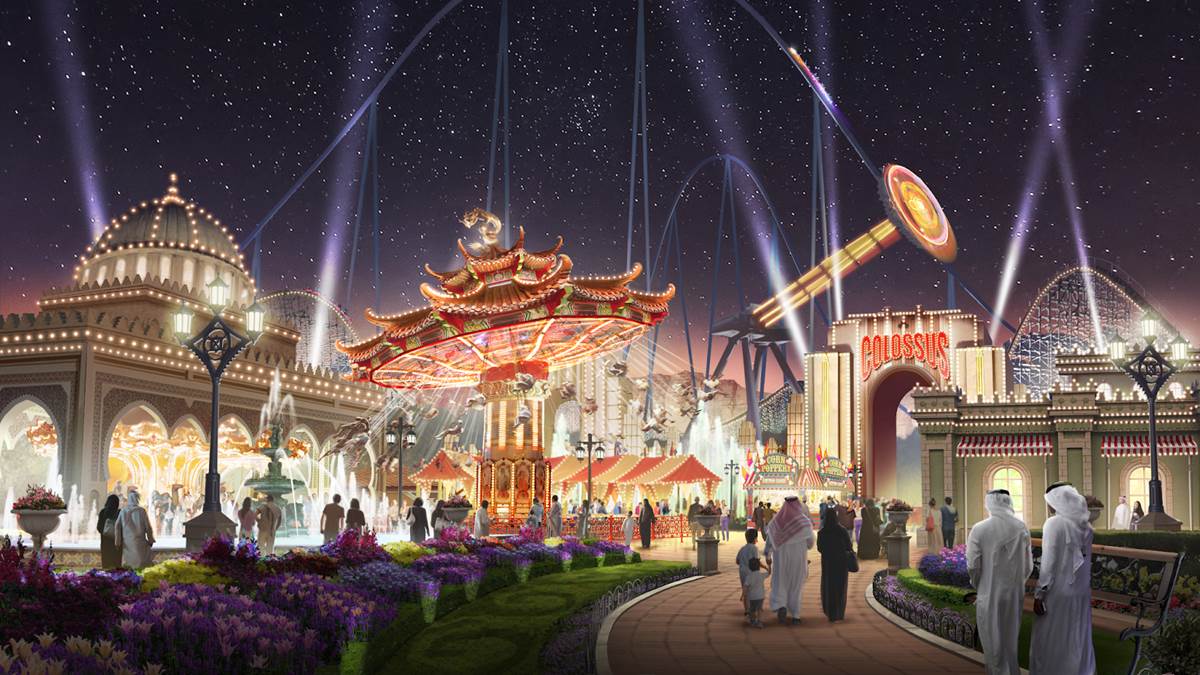 Grand Exposition is a celebration of innovation combining the nostalgia of traditional World Expos with the greatest feats of science and technology such as the Gyrospin Pendulum, which swings riders to record heights. It is also home to Six Flags’ classic and most loved coaster Colossus, a gravity-driven wood-steel hybrid coaster that stretches over an 800-meter track. The land also features the Arabian Carousel, where Arabian horses march in a circular parade, the Expo Flyer swinging ride and the Roundabout featuring a bumper car attraction themed as London cabs.

CNN Arabic did a piece on Six Flags Qiddiya, revealing a little more information on Falcons Flight, the park’s record breaking roller coaster. You can view it below:

Six Flags Qiddiya looks to be a theme park unlike any other, with not only the incredible coasters that the chain is known for, but also incredible theming worthy of a Disney or Universal park. While I don’t see myself getting out to Saudi Arabia, I will at the very least be interested in seeing just what this park looks like when it opens in 2023!

For more information, including additional concept art, an interactive map and more, check out the official Qiddiya website.