Hello and welcome to Laughing Place’s regular recap of new episodes of The Simpsons on FOX. This week’s installment, entitled “The Longest Marge” (a reference to the 1974 prison football film The Longest Yard starring Burt Reynolds), is the 11th episode of the long-running animated sitcom’s 33rd season. “The Longest Marge” begins in an empty Springfield Nuclear Power Plant, where it’s revealed that all the workers have gathered in the break room to watch the Atoms football team draft a new player with their first draft. Fans all around town riot in response to the draft, and Mr. Burns watches from his office window, where Smithers reports that revenue is down from Burns’s Mr. Gentleman sipping brandy, which does not encourage actually drinking the product. A hip ad man (guest star John Mulaney) is brought in to help and suggests a celebrity endorsement by Grayson Mathers (Beck Bennett), the Springfield Atoms’ new star player, who is already facing criticism for his in-your-face public attitude. “I wish I was half as myself as he is,” says Lenny. The ad man says people crave authenticity so Burns orders Smithers to hire Mathers and dump the advertising executive down a trap door.

A new commercial is created showing Mathers chugging Mr. Burns’s brand of brandy, and in celebration the football player hugs his new boss, which endears him to Burns. The Simpsons attend an Atoms game at the arena, where Bart notices that Mathers looks hungover from his night out clubbing at “The Hay” and “The Sack” (where the afterparty was). Grayson drops an easy pass and gets angrily booed by the crowd. “The 22-year-old I bet all my happiness on is nothing but a bust,” complains Homer. Mr. Burns is offended by the booing, and Mathers literally gets “Haterade” dumped on him by his teammates, followed by an unending pile of thundersticks and souvenir loaded nachos. “There are worse things to be buried under,” says an uncharacteristically optimistic Mr. Burns. Later, Burns and Mathers take an ice bath (which Monty calls body-temperature) next to each other, and Mr. Burns promises to help the footballer earn the respect of others by bringing him to Springfield Elementary School to speak to the kids. “I have a question: you suck!” says Nelson Muntz, followed by other insults. “The children are destroying him with their hot takes!” observes Mr. Burns. Mathers throws a book and breaks the tank containing the school’s pet Madagascar Hissing Cockroaches. Grayson passes out due to having drank too much brandy (“My urethra is on fire!”) so Marge tries to comfort him in the nurse’s office, telling him to slow down. “I know what’s wrong with you: not enough Ferraris!” says Burns, but Marge offers to take care of Mathers at the Simpson home. He eats dinner with the family, and Lisa asks him what he majored in at college. “They never told me.” “Oh, that means Communications.”

We get a montage of Mathers’s youth and how he got recruited into college by receiving a huge payoff, but didn’t get to spend much time with his parents growing up. He and Bart get into a tackle fight over a pork chop, so Marge yells at him for stealing food. “In a family, you don’t ‘do you,’ you ‘do others?’” Grayson sleeps on the floor in Maggie’s room and asks Marge if he can stay there for a while. “I’m a lot of work– I need 9,000 calories a day or I’ll die.” “So does my husband.” Another montage shows Mathers’s life around the Simpson home, and then he attends church with the family, tipping Reverend Lovejoy with a wad of $100 bills for “a little fuel for his private jet.” Burns and Smithers visit Grayson for his birthday barbecue and offer to take him out for a night on the town with Duffman, who has been rebranded as “Brandyman.” Marge refuses to let him go, but burns complains, “You mollycoddling will have dire consequences!” 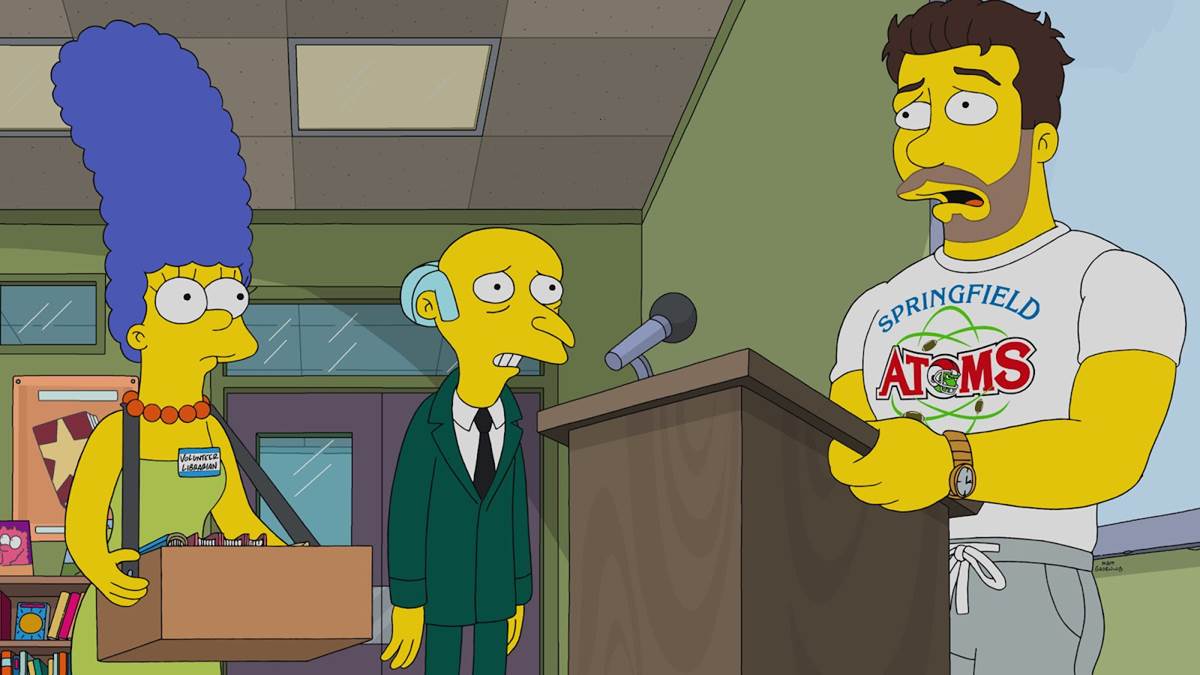 At the next game, Grayson scores a 53-point live, to the point where the other team retires to try their hand at Canadian football. Mathers refuses to badmouth the other team to the press, instead proclaiming himself a “mama’s boy” thanks to his love of Marge and her efforts in turning his life around. Burns storms the Simpson home and demands control of the football player back from Marge: “You’ve got to choose, my boy: me or her?” Grayson leaves the room crying and drives off in his six blue Ferraris. Days later, Homer says neither the NFL or ESPN have heard from the player, and Marge worries she’ll never see him again. A fancy invitation arrives for Marge to attend the “Sportswardsies,” where she will be Grayson’s plus-one. Arriving at the awards show, Marge finds that she’s been “Parent Trapped” to sit next to Mr. Burns instead, and toasts the billionaire that they will be “enemies forever.”

Homer, Bart, and Lisa watch the show from home, and a player accepts an award by thanking the assistant he had to hire to carry all of his awards for him. After sharing a few drinks, Marge and Monty declare they’re going to try to be better fake parents to Grayson, together. When Mathers wins an award, he shockingly thanks his fiancee Katelynn, an Instagram model and yogurt entrepreneur and his new business manager. “She’s getting me out of the brandy business and into something more wholesome: our new line of all-ages hard seltzers.” In the audience, Burns and Marge bond further as they mourn their mutual loss. And in the coda, we see more of the Sportwardsies, including a promo for the “Least Racist Team Name” and “Most Tone-Deaf Hall of Fame Speech” awards. 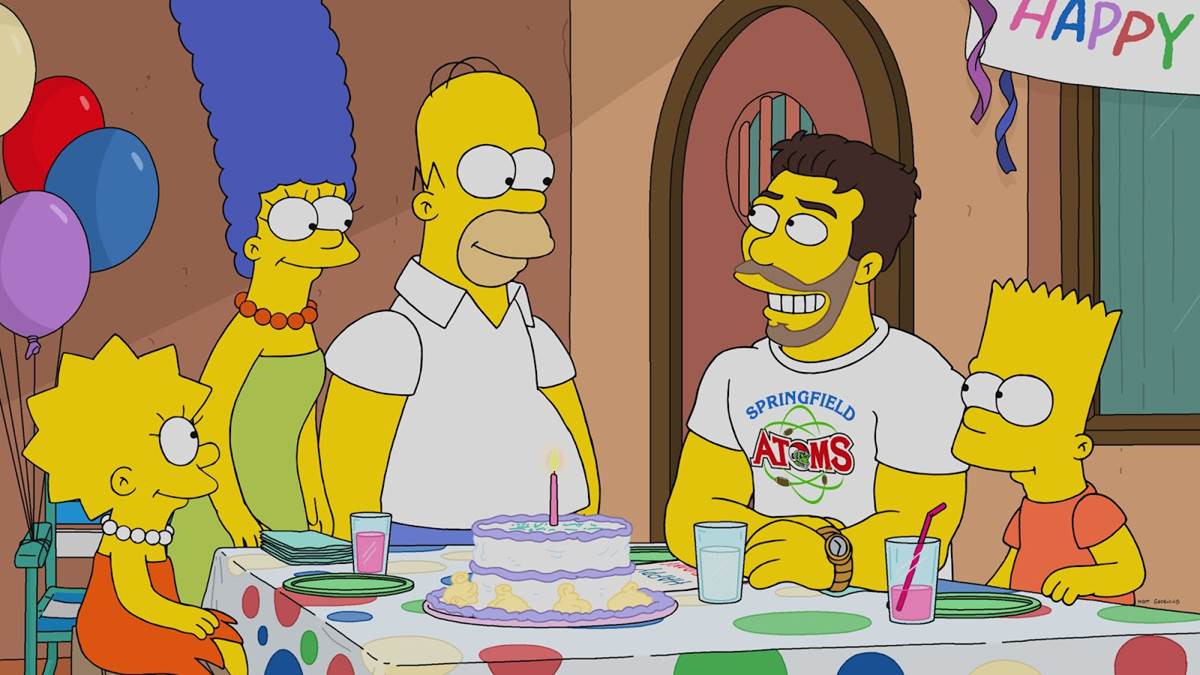